The average stock value gain for the top public vendors tracked by WWD was over 47 percent.

By Arthur Zaczkiewicz on January 5, 2021

Curbside pick-up at a Target store in Poughkeepsie, N.Y.

For the top publicly traded technology and solution providers endemic to e-commerce and retail businesses, 2020 was a milestone year from a stock valuation perspective. Of the top 15 companies tracked by WWD, their average gain in value was 47.5 percent.

This far outpaced the Dow Jones Industrial Average’s year-end gain of 6.9 percent and the S&P 500’s 16 percent increase. The increase was also ahead of the tech-heavy Nasdaq with its year-end gain of 43 percent.

In the WWD vendor list, 11 of the 15 companies closed 2020 with gains. Square Inc. clocked a whopping 245.7 stock value increase in 2020, and was followed by PayPal Holdings with a 115.3 percent gain. FedEx Corp. had the third-largest increase at 69.5 percent and was followed by PTC Inc. and XPO Logistics with gains of 58.6 and 52.3 percent, respectively.

Adobe Inc. and Zebra Technologies Corp. had increases in stock price valuation for the year of 50.7 and 50 percent, respectively.

One notable trend among the top gainers for the year was that they all rebounded quickly after the March pandemic-fueled stock crash. For companies such as Square and PayPal, investors keyed into the move away from cash to digital payments induced by COVID-19 as consumers embraced online shopping. And for companies such as Zebra Technologies, the demand for curbside pick-up was a boon to business.

During a question-and-answer session with analysts following a quarterly conference call last month, Anders Gustafsson, chief executive officer and director of Zebra Technologies, acknowledged how the accelerated digitalization of retail helped drive sales and profits while also changing how retailers and brands viewed his company. Gustafsson said, “If you go back five-plus years or so, I think our customers thought of us more as a tactical productivity tool. As we have expanded our solutions and worked on our Enterprise Asset Intelligence vision, I think today our customers tend to think of us as an enabler of their strategies.”

And as the pandemic reshaped business, the CEO said he saw that “a lot of our customers had to scale up their capabilities” with buy online, pick-up in store and curbside pick-up — based on consumer demand for these services.

On the backend, the accelerated digitalization of retail helped companies supporting fulfillment, product design, sourcing, data management and e-commerce such as Adobe, FedEx, UPS and Microsoft. For PTC, 2020 was recently described by the company as a “banner year.”

Customer of PTC’s FlexPLM platform include Adidas, Burberry, Deckers Brands, Home Depot, Lacoste, Marks & Spencer, Patagonia and Ralph Lauren, among others. The company said 2020 “saw the announcement that more people use FlexPLM daily than any other fashion or retail PLM platform, and that considerable margin has grown further.”

Bill Brewster, senior vice president and general manager of PTC’s Retail Business Unit, said 2020 has been a unique year for every industry, “but in retail, the primary reason organizations seek out new technology remains the same: gaining an edge in a hyper-competitive market.” 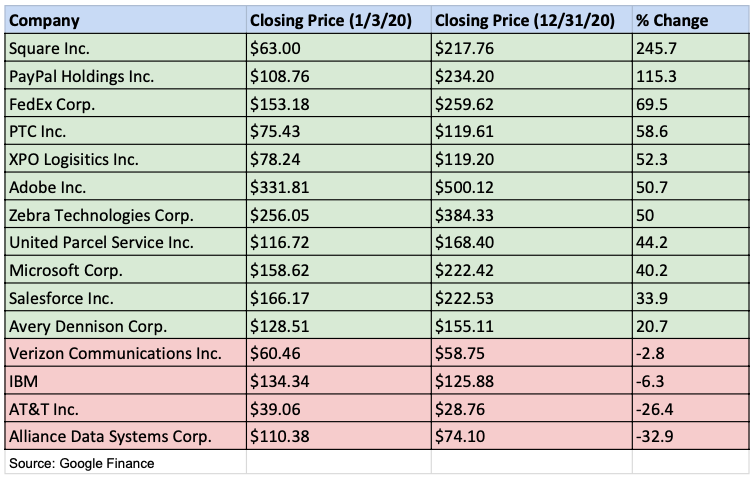