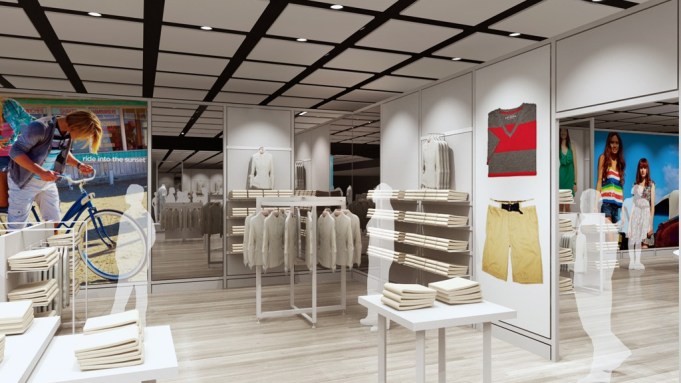 In an unorthodox procedure, Penney’s is taking applications from vendors seeking to sell to the store beginning in spring 2013. And the deadline is less than a month away.

It’s just one of several new elements in Penney’s much-ballyhooed reinvention strategy that have come to light in recent days. The overall strategy, unveiled in January, continues to be fine-tuned and its message has apparently triggered what Penney’s was after — an avalanche of interest from vendors eager to do business. “At this point, it’s a high-grade problem,” said Penney’s president Michael Francis, in an exclusive interview.

Executives intend to manage the response through its application process. The procedure requires vendors to submit four years of sales and margin projections, 3-D color renderings of the space a vendor could create at Penney’s with its floor and fixturing plan, and retail prices, among other information. The bill of particulars must be submitted as a pdf file to fairandsquareshops@jcp.com by May 1. Penney’s will give suppliers the thumbs up or down by June 1. Penney’s could repeat the application process in subsequent seasons.

WWD has also learned that Penney’s selling floors across the 1,100-unit chain will be reformatted into a mix of “stores, shops and boutiques.” The retailer defines stores as enclosed environments with unique service and at least 2,000 square feet. Sephora and Martha Stewart are considered stores-in-the-store.

For its anchor locations, which are generally 180,000 to 220,000 square feet, Penney’s is looking to install a total of about 100 stores, shops and boutiques. Smaller locations will have fewer. The Penney’s chain averages out at 100,000 square feet per location, and store sizes vary widely.

There’s an element of conformity to the reinvention program. To build spaces inside Penney’s, vendors must use a Penney’s-specified “base shop kit of parts” that includes wall systems, utilities, basic fixturing and staffing. It’s paid for by Penney’s. In addition, there’s an “à la carte incremental menu” of components, such as glass walls, ceiling treatments, lighting, flooring and fixturing, that suppliers could use for some customizing, but must pay for. Penney’s said there’s still room for vendors to incorporate signature fixturing, decor and lighting.

Penney’s plans to recast its main aisles into “The Street,” which will become the “main pathway” directing shoppers to brand presentations with “fun, engaging things” along the way, for browsing, relaxing and activity on The Street, said Penney’s officials. In addition, the center core will be transformed into “The Square,” a destination for services, product demos and other nonselling features, as previously reported. Penney’s declined to give details on The Street or The Square, noting they’re works in progress.

“The reality is, before, we had a fairly traditional department store layout more heavily cluttered with fixtures and products. The vision completely transforms the shopping experience by curating the assortment of leading global brands into a series of stores, shops and boutiques — three primary platforms — to completely reimagine the experience and allow our brand partners to celebrate their own brands in a manner that’s both fresh and differentiated from what’s in department stores today,” said Francis.

Typically, retailers first learn about vendors by visiting their showrooms. Asked if an application process is an unusual way of opening doors to new business, Francis replied: “This strategy is unique in every way. It’s nothing short of reimagining American department stores. It starts with the product. We have to have product that’s incredibly well-priced and designed, and have to work with vendor partners in a way that is straightforward and honest.”

Asked if the new framework for building in-store spaces would homogenize the selling floor, Francis replied: “We are trying to be very thoughtful and organized in our approach. There will be a clear architectural system, including back walls and fixturing that allows Penney’s to establish a tone for the entire store and cohesively guide consumers through the new Penney’s.” By providing the framework, “We can insure the entire store hangs together.”

He also said there will be long vistas across the selling floor that won’t be “hard-walled” and will allow for “great flow and great energy off The Street.…The Street is very open. It’s a very thoughtful approach on how we will navigate customers across the store.

The goal is to insure that when customers come into J.C. Penney, they are drawn down The Street past this compelling assortment of boutiques, shops and stores, all the while preserving the brand integrity. There are elements that enable each partner to bring their brands to life effectively.”

In January, Francis and chairman and chief executive officer Ron Johnson in Manhattan revealed a four-year road map to reinvent the $17.3 billion Penney’s. There is an $800 million capital budget to fund the first year of the reinvention, they disclosed. Ultimately, Penney’s expects to realize higher productivity by recasting the selling floors, and $900 million in annual savings by 2013, largely through cuts in personnel at the Plano, Tex., headquarters, in stores and through reduced marketing expenses. Penney’s also chucked its promotionally frenzied, high-low pricing approach in favor of a less-confusing, three-tiered strategy to everyday low prices, monthly values and clearance days the first and third Fridays of every month. Coupons were also eliminated and a “fair and square” marketing program with a new jcp logo was introduced.

There’s been some misconception that the department store will edit itself down to 100 brands. “We are not narrowing to that degree, though we are definitely going through an editing process right now,” Francis explained. “We are not worrying about overly narrowing options for consumers. Much of what we are doing will be introducing new brands and concepts. We’ve been on a quest for four months, meeting with partners all over the world. This next cycle gives them components to take their ideas and passion and create something unique for Penney’s. We expect this conversation will be continuous. We expect to be in the market continually.”

Francis said all shops, stores and boutiques will be planned for four-year terms, though there’s flexibility depending on performance. He believes four years represents an appropriate stretch to build businesses and to earn an appropriate return on the investment. “We always of course have to be thoughtful and intelligent how we manage the business,” he said. “If we are not satisfied, we expect our partners to be equally unsatisfied. But we want to demonstrate real commitment and want to work with our partners differently,” than in the past. “We don’t want any of the trickery of markdown allowances or co-op advertising. This is all designed to create a very different partnership model.”

All merchandise will be purchased at a negotiated wholesale cost, with no strings attached, Penney’s said. “There will be no requests for cooperative advertising, markdown money or other items that have plagued our industry for far too long,” Francis said in a letter to vendors obtained by WWD. “You will be able to determine the profit formula for your relationship with J.C. Penney at the time your line is curated with your J.C. Penney merchandising team.”

To further partnerships, Penney’s will be offering incentives to vendors, based on surpassing gross margin dollar goals. For every dollar of gross margin achieved above the target threshold, vendors can earn 50 cents, and Penney’s earns the other 50 cents. “Rather than asking you for a check at the end of each year, our goal is to send you one,” Francis said. Penney’s simplified pricing structure makes it easier to work with vendors.

This year, “So many different ideas have surfaced,” Francis said. “We have a series of exciting concepts flowing in that we will be sharing in short order.” Penney’s has already unveiled new in-store concepts for Liz Claiborne, Arizona and Izod, and for introducing L’amour by Nanette Lepore this fall. The next “tranche” of brand concepts will be disclosed in the coming weeks, Francis said. “Our whole organization is moving fast.”

Leasing will not be part of the strategy, nor will beauty expand beyond Sephora. “At this time we are not looking to broaden beauty beyond the excellent [partnership] we have with Sephora,” Francis said.

In the past, it’s been difficult for Penney’s to get national brands. Macy’s and other competitors have had more luck, while Penney’s attempted to make up the shortfall by aggressively building up private brand development to differentiate. “It wasn’t because we did not have the ability to forge partnerships,” Francis said. “It was the promotional bottle that was in place.”

Private labels were created “to feed the promotional intensity as opposed to having developed meaningful partnerships. The promotional madness defined the strategy, rather than a lack of support from national brands,” he said.