The store will feature the brand's full ready-to-wear, footwear and jeans collections, as well as curated third-party products.

The interior of Veronica Beard's Georgetown store which opened in September.

Veronica Beard is continuing to aggressively expand its retail footprint.

Next month the contemporary sportswear brand will open its 13th store in the U.S., a 1,000-square-foot boutique on Newbury Street in Boston.

This follows a Georgetown store that opened in September, and boutiques in Greenwich, Conn., and Nantucket, Mass., that opened in June. Veronica Beard also has two stores in Manhattan and two stores in Los Angeles, as well as boutiques in Dallas, Houston, San Francisco, Manhasset, N.Y., and Bal Harbour, Fla. (The Nantucket store will be open from mid-April through the end of November.)

“We’re excited to bring the world of Veronica Beard to Boston’s iconic Newbury Street and we can’t wait to meet our customers,” said Veronica Miele Beard, who founded and codesigns the brand with her sister-in-law, Veronica Swanson Beard. “Whether she’s on the hunt for the perfect pair of jeans, an iconic dickey jacket or activewear, we’ve thoughtfully designed the pieces she will treasure whether she’s in college, working, taking care of her family or just in town for a visit.”

Each of the Veronica Beard stores has a different decor. The Newbury Street store was designed to feel bohemian and free-spirited, featuring vintage artwork, rattan furniture and blue and camel fabrics throughout the space. China Seas Antik Batik floral fabric serves as the base for the store, complemented by Lisa Fine patchwork fabric on chairs and draperies in blue pindler fabrics with fringe details.

“Stores give our brand the three dimension we really want,” Swanson Beard said. She said her customers can come in and sit on the sofas they upholstered and smell the candles, and each store is designed differently. Personally, she said, she loves to go into stores and try things on.

The Veronica Beard store will offer the brand’s full ready-to-wear, jeans and footwear collections, as well as some curated third-party product.

“As with every other Veronica Beard store, Boston has its own unique interior design scene,” Swanson Beard said. “We went for a more earthy palette and imagined a heritage bohemian vibe for the store, inspired by Boston’s history and its nautical influence. We used cool mid-century rattan pieces and batik print fabrics that feel vintage and modern at the same time. The art is an eclectic mix of pieces by our friends Marco Walker and Laurie MacMillan.” 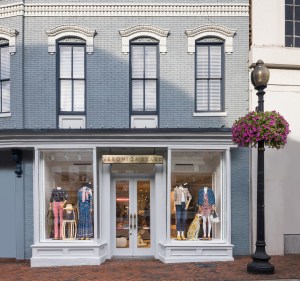 The company plans to open its 14th store in Chicago in late spring.