The location will be the brand's first in Scottsdale.

Versace will open a store in the luxury wing of Scottsdale Fashion Place. 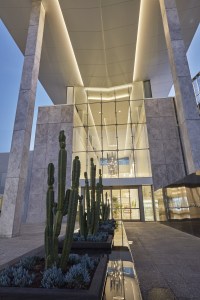 Macerich’s Scottsdale Fashion Square has landed a big player for the elevated luxury wing its been populating with tenants since last winter. Versace in spring 2020 will open a 3,131-square-foot store featuring the Italian designer’s modern retail concept. The location will be Versace’s first in Arizona.

Versace will join Saint Laurent, Louis Vuitton, Gucci, Cartier, Bottega Veneta, Bulgari, Prada, Salvatore Ferragamo, Jimmy Choo and Burberry, among others. “Versace has a limited store count in the U.S.,” said Michael Guerin, senior vice president of leasing at Macerich. “They go to the best locations in New York, Miami and Los Angeles. Versace is validating the draw of Scottsdale Fashion Square as the place for luxury in a 250-mile radius.

“When you see what we’ve put together, we’re marrying the heritage of a brand such as Versace and the dynamic aspects of their fashion with Scottsdale Fashion Square,” Guerin added. “As we transform, the retail renaissance of this property epitomizes smart growth and proven execution coupled with a dynamic and robust marketplace.”

Guerin said the notion that Scottsdale is populated by retirees and snowbirds is incorrect. “Take the market dynamics. Some people think Scottsdale is a more mature customer. There’s huge tech growth and an upwardly mobile, tech-savvy customer in Scottsdale,” he said, noting that young professionals are migrating from the San Francisco Bay area where housing costs are untenable. “Brands are looking for diversity. The profile of the customer has more breadth than it ever had.”

Guerin said he met with the ceo’s of luxury brands and “listened to their feedback for the optimized recipe for success. Additional amenities and improved aesthetics are included in that package,” he said, noting that high-end furnishings and finishes were introduced to the area and a Swarovski-inspired light column was installed in the Crystal Court. Anchored by Neiman Marcus, luxury wing features a new grand entrance designed to provide a sense of arrival with a striking, two-story glass entry.

“In addition, and parallel to growing the luxury footprint, we’ve greatly and thoughtfully elevated our food and beverage offering,” Guerin said, adding that Nobu Scottsdale, the first in the market, will bow in the spring. New dining concepts that have opened at the property include Ocean 44, a seafood restaurant from the team behind Steak 44 and Dominick’s Steakhouse, and Toca Madera, an art-filled Mexican eatery from West Hollywood.

Equinox in 2021 is scheduled to open a fitness center, and Republic Scottsdale, the first nongaming hotel from Caesars Entertainment, will bow along with two new dining concepts from Giada De Laurentiis.