Via Spiga has returned to retailing with a SoHo store marked by a light merchandising touch and an al fresco-style interior. 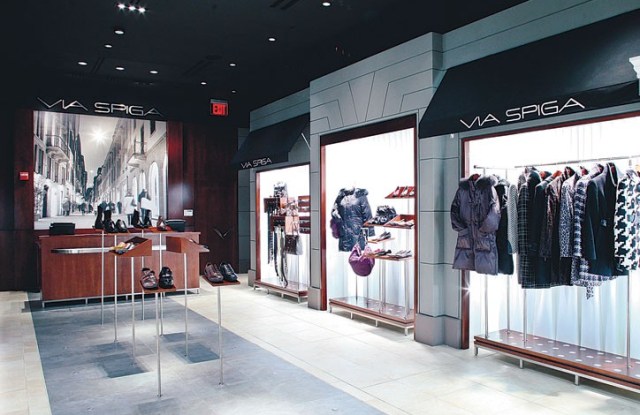 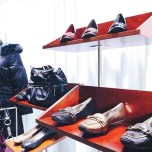 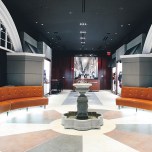 NEW YORK — Via Spiga has returned to retailing with a SoHo store marked by a light merchandising touch and an al fresco-style interior.

There’s also an air of familiarity. The two main walls of the 2,600-square-foot shop simulate 10 storefronts and evoke window shopping along the Via della Spiga in Milan. Each tells a different merchandise story. Trappings of an Italian piazza — a working fountain in the center of the floor, cool stone tiles, and an oversize image of the store’s namesake street on the rear wall — add to the effect.

The store is further defined by its openness, and long, semicircular banquettes where shoppers can sit and try on shoes. “The store is a culmination of how we envision Via Spiga,” said Rick Ausick, president of Brown Shoe New York Wholesale, which purchased the 25-year-old Via Spiga brand from Bennett Shoe in 2005.

On Wednesday, a party celebrated the opening of the SoHo location at 487 Broadway, Via Spiga’s only retail shop.

The brand once had a handful of stores, but they were shut by Brown Shoe as it remade Via Spiga, which is sold at Nordstrom, Bloomingdale’s, select locations of Macy’s and specialty stores. “We closed those stores for many different reasons, the primary one being we wanted to go back and make sure the brand was positioned well with the consumer,” Ausick said.

The store showcases the true breadth of the collection — shoes, boots, handbags, coats, belts and sunglasses — and provides a platform to possibly launch Via Spiga stores in some metropolitan areas, Ausick said. No sites are set.

“Some people expressed interest internationally, but there is no time frame” on a retail rollout, Ausick said. “We won’t make that decision until well into 2009.” The plan for now is to run the SoHo shop and “understand the ins and outs.”

Future stores could be company-owned or developed through partnerships, he said.

The brand has been remade with better fits, higher quality and a sharper focus on a customer with “an elevated sense of fashion, somebody who understands what’s going on in the world, and might be able to afford higher price points,” Ausick said.

The SoHo store is stocked only with Via Spiga merchandise. However, in February, the Vena Cava for Via Spiga spring footwear collection will be displayed in the space and also sold at viaspiga.com.