Nomura joins Vicomte A. from Hermès, where he served as senior designer and product manager of knitwear. 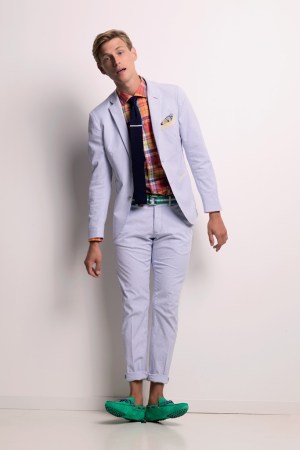 PARIS — Vicomte A. is plunging deeper into designer fashion.

The preppy French brand, best known for its polos, has tapped Taiga Nomura to head its men’s wear department, WWD has learned.

Nomura joins Vicomte A. from Hermès, where he served as senior designer and product manager of knitwear under Véronique Nichanian. He previously headed the design team at French men’s wear maker Celio.

Nomura, who will also oversee the children’s and accessories lines of Vicomte A., succeeds James Harvey-Kelly, who is transforming Emmett London from a bespoke shirtmaker to a lifestyle brand, while continuing to consult for the company.

Arthur de Soultrait, the label’s founder and creative director, said as the company was rapidly growing following the investment of 5 million euros, or $6.3 million at current exchange, by CM-CIC Capital Finance earlier this year and gradually pivoting away from French preppy to sportswear chic, it needed a more experienced hand.

“James is more of an artist and a great tailor; he will be perfect to style our shoots and design a red-carpet capsule for us. With Taiga, we are [getting] a leader, someone who can guide a bigger crew,” explained de Soultrait.

The appointment comes on the heels of an executive reshuffling that saw the addition of a chief operating officer, an export manager and a communications director.

Nomura’s first men’s wear collection for Vicomte A., which will feature handmade knitwear alongside more sporty nylon and flannel pieces, is slated to make its debut in fall 2015. Men’s accounts for 85 percent of the label’s total sales, while its signature polo shirt business is down from 90 percent of sales in 2010 to 40 percent.