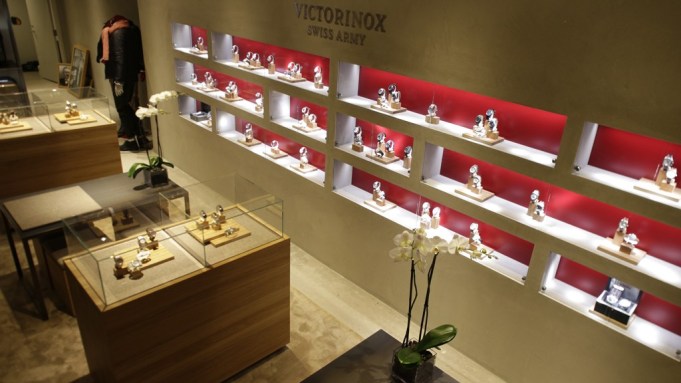 NEW YORK — The search is finally over for Victorinox Swiss Army.

After a year-long mission, the brand on Friday will open the doors to its New York flagship, a 2,500-square-foot space in a historic former firehouse in the heart of SoHo.

The three-story building at 99 Wooster Street between Spring and Prince Streets replaces a unit around the corner that closed in June of 2011 after its lease expired.

The building had previously been home to a firehouse, Engine Company 13 Manhattan. In a nod to the location’s history, Victorinox has retained key original architectural details including the facade, concrete floors and exposed brick. In addition, the company has installed a museum inside the main entrance with historical artifacts and images of the building combined with vintage Victorinox Swiss Army vignettes that show the brand’s evolution since its founding in 1884 as the maker of the Swiss Army knife.

The street also boasts stores from Chanel, Tiffany, Patagonia and Barbour, which was one of the reasons it appealed to Victorinox. “It’s a very affluent neighborhood now,” he said.

Upon entering, the company’s collection of knives is showcased on the walls on either side of the museum displays and includes everything from the Classic and SwissTool to USB and golf models.

In the center of the store is the company’s apparel offering, with the larger men’s assortment on the left and women’s on the right. The holiday collection offers pops of color including bright yellow, green and orange on several products and includes signature products such as a snorkel parka ($795), a leather explorer jacket ($850) quilted vests ($195) as well as sport shirts, an assortment of sweaters, corduroy pants, jeans, hats and scarves. “There’s not a lot of heavy outerwear,” said Joachim Beer, president of global fashion and licensing. “We believe in layering.”

The store also offers a curated assortment of Victorinox’s travel gear ranging from backpacks and luggage to golf bags, as well as a large assortment of timepieces for men and women including the popular Dive Master and Alpnach models.

Apparel accounts for about 35 percent of the mix, travel gear 30 percent, timepieces 20 percent, cutlery 14 percent and fragrance 1 percent. The store is expected to have annual sales of about $9 million.

Gallen said that since Victorinox closed its other store after a decade on Prince Street, customers have been clamoring for a replacement. As a result, he expects to attract a mix of both locals and tourists. “This is the only place to find the entire assortment,” he said.

With the opening of this store, Victorinox now operates eight full-price units in North America as well as two outlets in Woodbury Common in Central Valley, and Niagara Falls, N.Y. Next year, the brand will open outlets in San Marcos, Tex., Seattle and Toronto, as well as one full-price store in the Mall of America in Minneapolis. The company also operates units in London, Geneva, Düsseldorf, Tokyo, Hong Kong, Shanghai, Paris and Heidelberg, Germany.