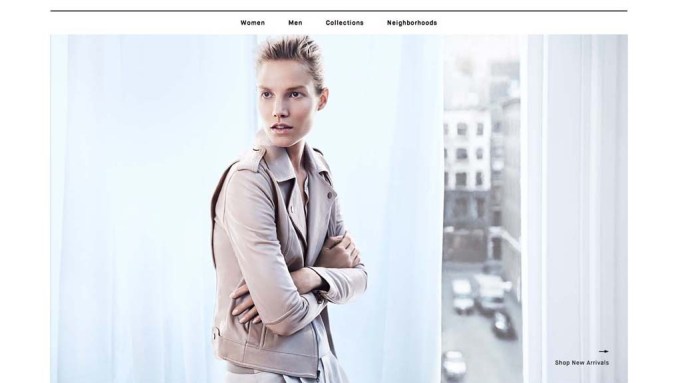 NEW YORK — Vince has relaunched its Web site, which allows customers to explore the Vince world through a new Neighborhoods concept.

The brand’s 28 freestanding stores are located in varying and distinct fashion hubs worldwide. The Neighborhoods section offers original content highlighting local Vince shoppers’ style and information on where to go to discover the character of each neighborhood. The section also recommends key Vince pieces to wear and head-to-toe looks based on the neighborhood’s vibe. It will be updated on a regular basis and can be shared on social media.

The site launches with the Melrose Place store in Los Angeles, East Oak Street store in Chicago and New York’s Mercer Street store in SoHo and Madison Avenue store on the Upper East Side. For example, if one selects Melrose Place, the site will give suggestions on what to wear for Saturday brunch at Little Door (jacquard sweatshirt, printed silk short and Genna pumps) or window-shopping down 3rd Street (jersey black silk T-shirt, cargo pant and Seymour wedge espadrille).

“The goal of Neighborhoods is to create an omnichannel experience that bridges the in-store and online customers,” said Beth Cohn, senior vice president of retail and e-commerce at Vince. The company will introduce a new neighborhood once a month, which will be publicized through e-mail.

The publicly traded company partnered with creative agency Wednesday to develop the Neighborhoods concept and to refine the overall look of the Web site. The site features improved functionality, enhanced photography and an updated layout and design. “We really view it as the flagship destination for all our product assortments,” said Cohn, pointing specifically to the “Shop the Look” section for men and women to encourage consumers to buy head-to-toe outfits.

The site offers free ground shipping in the U.S., and will ship internationally at an additional cost. The new site has a currency converter.

Jill Granoff, chief executive officer of Vince, believes the newly enhanced Web site will increase conversion rates. “We believe conversion will increase and our units per transaction will increase based on the fact that we’re helping to create all these looks and showing how to put outfits together,” she said. She expects the average order value will go up as well.

At present, the Vince e-commerce site is the company’s number-one store. Granoff said that Vince’s Web sales doubled in 2012 — the year Granoff and Cohn joined the company. “The Web is our fastest-growing channel today, and we have seen continued double-digit growth through the third quarter of 2013,” said Granoff.

As Vince adds new categories, such as men’s footwear and kids’ wear this fall, the new Web site will allow the company to feature them in their entirety. “As we add new categories we can showcase the full breadth and depth of the line on our Web site. We think that’s very important too,” said Granoff.