The shop features an elevated mix of women's and men's apparel, footwear, handbags and home products.

Vince has opened its first Hamptons store at 50 Main Street in East Hampton.

The shop, which opened Monday, is nearly 1,900 square feet, with about 1,300 square feet of selling space. The store features an assortment of women’s and men’s apparel, footwear, handbags and Vince home product. In addition, the space will spotlight an assortment of seasonal third party and co-branded product, available beginning in late spring.

This is Vince’s 49th full-price retail store. The company also has 15 outlet stores and its e-commerce site.

“The Hamptons is a key market for Vince, especially with many of our customers now having set up permanent residence in this coastal community,” said David Stefko, interim chief executive officer and chief financial officer of Vince. “This store gives us the opportunity to communicate and engage directly with the local customer, and ultimately better service their needs.”

Reflecting Vince’s understated, coastal California-inspired aesthetic, the store is designed in a neutral color palette and plaster details, with accents of warm wood and rattan.

A pair of vintage 1970s Afra & Tobia Scarpa for Cassina sofas in ivory leather anchor the space, alongside custom designed tables in plaster and travertine. In addition, floor to ceiling sheer drapery adds softness to the walls, contrasting with the solid surfaces featured elsewhere in the space. 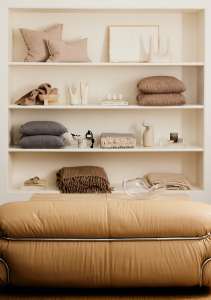 Inside the Vince store.  courtesy shot.

The new store will spotlight women creatives from New York and California with a curated display of art pieces, including sculptures by Katie Thompson (which are also featured in the newly expanded Westchester Mall store) and Simone Bodmer Turner and work from Cheryl Humphreys. The store also features a collection of photographs of the California coastline shot by Vince creative director Caroline Belhumeur over the course of the pandemic.

“Our goal with each store is to create an environment that highlights the relaxed, luxury feeling of the collections,” Belhumeur said. “For the Hamptons, we took our design inspiration from our California roots, installing pristine white drapery for lightness and sourcing natural stone to bring the outdoors in — each element imbuing the space with a sense of comfort and warmth.”

The store will have reduced hours from February to March, with an expanded schedule expected during the summer months.

The store will operate on a showroom model where single units are placed on the selling floor and store associates pull new items from the back to fulfill purchases. The store has opened with such precautionary measures  as increased store cleaning and frequent disinfection, reduced occupancy, requirement of all employees to regularly wash hands and everyone who enters the store must wear a face while inside.

Target To Invest $4 Billion Annually To Growing Its Ecosystem