Cassandra Huysentruyt Grey is getting ready to take her beauty Web site into the world of e-commerce in time for the Oscars next month. 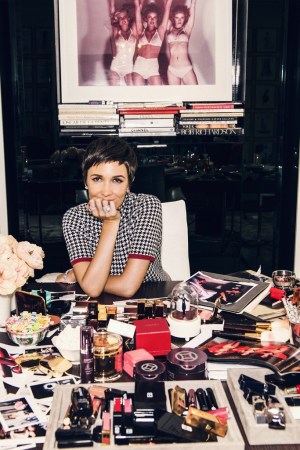 LOS ANGELES — Cassandra Huysentruyt Grey is getting ready to take her beauty Web site Violet Grey into the world of e-commerce in time for the Oscars next month.

The first offerings on violetgrey.com, the “Award Seasons Edit,” will focus on red-carpet beauty, highlighting the products used by the celebrity makeup artists working overtime during awards season.

“It’s Hollywood’s hero products,” Grey told WWD over breakfast at the Chateau Marmont in West Hollywood. “It’s the things that are being used here.”

For Grey, it was important that the site carry the prestige brands — including Dior, Tom Ford, Giorgio Armani and YSL — found in the kits of makeup artists. A beta version of the site went live in July, with highly stylized editorials featuring the likes of Jessica Paré and Eva Mendez, as well as contributions by industry veterans including Charlotte Tilbury, Pati Dubroff and Beau Nelson.

The name Violet Grey is a play on the color of Elizabeth Taylor’s eyes and Grey’s surname (she wed husband Brad Grey, chairman and chief executive officer of Paramount Pictures, in 2011). The word “violet” has also become an integral part of Grey’s vernacular — and the brand’s DNA. She uses it as both adjective and noun — whether describing the glamorous beauty shots plastered on the walls of her workspace or referring to any of the “violets,” or personalities, on the Web site.

“Images are very important to me,” Grey said later at the company’s headquarters, a cottage on the chateau’s property. “Before I do a shoot, I always neurotically collect, swipe and tape [photos] on the wall. This is a mood board from Ben Hassett, a photographer I am currently collaborating with. This is his interpretation of violet.”

On a tour of her office, an airy white space that doubles as an arsenal of beauty products, she holds up an oversize Tom Ford bronzer compact she’s obsessed with right now.

Her vision is laser focused: a beauty destination with a distinct point of view that culls inspiration from Hollywood. Tightly edited selections of product and curation are key. She adds that the site’s reader (and soon to be consumer) is one obsessed with this seemingly unattainable beauty that stems from red-carpet culture — where she refers to hair and makeup as “armor.”

During the first year, the site will roll out all of the beauty categories, starting with a strong edit of color and nail products. Next will come sun, then hair, fragrance and skin care.

“Hollywood is the epicenter of image and the art of transformation — and it’s not really real; it’s a lot of smoke and mirrors,” Grey said. “There’s been so much storytelling that has gone into creating these iconic movie stars that we all know — and they were oftentimes created by makeup artists and hairstylists.”

There’s also a physical retail component — a 1,100-square-foot space nestled between Chloé and Isabel Marant on Melrose Place that will open to the public next month. For Grey, it was just as important to have a physical touch point for Violet Grey as a digital one.

“Shopping online is modern by definition; that is the modern part of our business,” Grey said. “[But] the studio is really going back to the old guard way of serving clientele.”