At Mexico’s El Palacio de Hierro, the mannequins are coming.

One hundred forty custom-sculptured and manufactured by Ralph Pucci International, to be precise. They’ll be arriving at Palacio’s Interlomas store in northwest Mexico City late this year and they’re part of a bigger visual story developing at the country’s upscale department store chain. There’s a concerted effort underway to sharpen the store identity and instill a more consistent tone from selling floor to selling floor, involving new graphics, improved lighting, upgraded windows for flexibility in display and innovative merchandising concepts.

“We want to edit, get rid of the clutter and reduce the noise,” said Lourdes Méndez, visual merchandising director of El Palacio de Hierro, which translated means “The Iron Palace.”

“We want to create a unique experience for customers, with more highlights, hot spots to have different themes, ‘moments’ for customers to remember us by and relate to. We want to make it shoppable,” Méndez said in an exclusive interview.

Méndez acknowledged that Palacio’s look has been “all over the place” and that the strategy is to project a cleaner, consistent and more modern image, and “focus more on merchandise guidelines, allocation, how many sweaters to a table, a size range that better fits the audience,” Méndez explained. “We are establishing clear standards and working closer with the commercial team in fashion on trends.”

Those “moments” to keep the store fresh and fun have spotlighted everything from desert trends in fashion inspired by Georgia O’Keeffe and shops for everything you need to make your own pasta, to “Day of the Dead” presentations recognizing the Mexican holiday celebrating the deceased, and gourmet “hot spots.”

On a recent morning, Méndez visited the Ralph Pucci showroom at 44 West 18th Street in Manhattan, which showcases an array of high-end furniture, lighting, art, photography and sculpture. The site also houses Pucci’s mannequin factory, where Méndez met with Pucci and his master sculptor Michael Evert, who was shaping the mouth of a mannequin destined for Palacio.

“He’s adding a little something minimal, abstract. It’s very, very subtle, but it changes the face considerably,” said Pucci. “It’s very much a Pucci look, but this will be very much in the Palacio image — their signature. Typically, Palacio would buy 100 to 150 mannequins from a variety of suppliers — some realistic mannequins, some abstract, some headless. This approach using one house, creating a new modern, clean look will take Palacio to a new direction.”

“The Pucci mannequins that we’re creating exclusively for Palacio are going to our Interlomas store at the end of this year,” said Méndez. “Interlomas had around 500 mannequins when the store opened,” in 2011. “The poses and looks were different, but there are no longer 500 mannequins, and we’ll replace them with the new Pucci ones, both male and female mannequins that will be used across several fashion areas from ready-to-wear to lingerie. The idea is to test them there first and use them for all new stores and renovations. The next store renovation where they’ll be used will be in 2020 in Coyoacán.”

Across the Palacio chain, there’s a team of 140 workers involved in visuals. At the corporate level, the visual team consists of 25 individuals including visual managers who work with the merchants to get commercial strategies translated into merchandising guidelines for the stores. There are also creative managers and designers (graphic and industrial) who work to bring to life all of the marketing campaign assets in the store through graphics and displays. They also communicate promotions and develop the signage in the stores.

In addition, there’s a visual operations team to make sure the guidelines and set-ups instructed by the corporate visual team are adhered to at the stores. “They are the most important link in the visual chain, since they execute everything planned by the corporate team as well as solve all sort of local challenges for each of the stores, which are very different from one store to the next,” said Méndez.

With the windows in Palacio’s Centro department store, for example, “We focus on the most elaborate displays,” Méndez said. “Last holiday, we re-created the scenes from our ad campaign revolving around a story about a child who wrote the longest letter ever to Santa and wanted to give all these gifts to his neighbors.

“At the Veracruz department store, which is opening in August 2019, we are developing new graphic vehicles that are flexible and modular,” said Méndez. “They will be used both to hold graphics as well as some merchandise, and they can be configured in various ways depending on the message we want to give each time we use them. These will be tested in Veracruz and rolled out next year to the rest of the stores.”

With lighting, the store design team, led by Monica Elguea, is working on projects for the upcoming Veracruz and Coyoacán stores. “We’re developing a new lighting standard for Palacio that will help enhance the customer visual experience, highlighting the featured merchandise as well as the visual moments in the store.”

Palacio continues with store “takeovers,” though they’ve been toned down. In the past, the store took a 360-degree tactical approach involving intensified marketing, merchandising, visuals and special events revolving around a single designer or brand. They’ve been orchestrated with Tory Burch, Nautica, Apple and Salvatore Ferragamo, among others. “We still do them but they are not as big as they used to be. We are trying to make the Palacio voice more important,” said Méndez.

“Sometimes when we did these big takeovers, the communications from our end got lost. Now we are still providing some spaces in the stores for these activations. The brands do get important spaces, but not as they were conceptualized in the past. They’re not the full takeover of the store. We keep the most important spaces for the Palacio voice.” 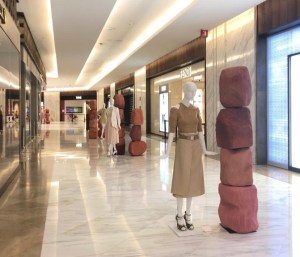