Five years in the making, the brand's latest “retail playground” — a 10,000-square-foot, three-story shop-in-shop — has opened in the London department store. 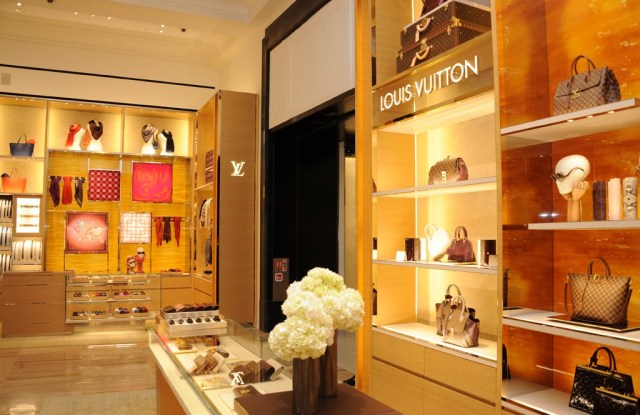 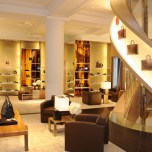 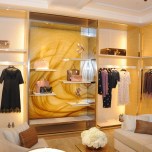 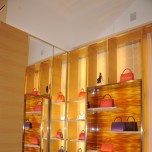 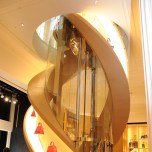 LONDON — Five years in the making, Louis Vuitton’s latest “retail playground” — a 10,000-square-foot, three-story shop-in-shop known as the Townhouse that features a revolving glass elevator inside a double helix, and an interactive “digital atelier” — has opened at Selfridges.

For the first time at Selfridges, Louis Vuitton has united all of its collections under one roof, including the collections by men’s style director Kim Jones, which had not been carried at the London department store until now. The new Vuitton store has its own entrance, next door to the main Selfridges one on Oxford Street.

What a roof it is: Created by the French-born, Japan-based architect Gwenaël Nicolas, the hero feature is a glass elevator that revolves like a corkscrew inside a double-helix-shaped structure with a stream of floating handbags inside it.

The ground floor showcases accessories, while the first is dedicated to men’s wear, and the second to women’s wear. Each floor faces Oxford Street on one side and opens onto the Selfridges shop floor on the other side.

On the ground floor, customers can sit at a big wooden desk and explore the brand using an interactive screen, reading about Vuitton’s history, craftsmanship and products on offer. The “digital atelier” also allows them to make wish lists that are automatically transferred to shop assistants’ iPads.

“The energy of the store is engaging and fast paced — it is a retail playground, designed to surprise the visitor, and trigger their curiosity,” said Roberto Eggs, Louis Vuitton president, Europe.

“The term ‘townhouse’ encapsulates the unique aspect of this space. It’s very London, Boston, New York,” said Michael Burke, chairman and chief executive officer of Louis Vuitton. “We have the concept of the ‘maison,’ which is very Latin. The ‘townhouse’ instead is an Anglo-Saxon concept. The space is welcoming, homey, but there is a sense of discovery and experience. It’s understated yet grand.”

Asked about sales projections for the new space, he looked skyward and said, “Through the roof.”

Alannah Weston, Selfridges’ creative director, said that at the outset, she wanted the new space to encapsulate the sense of a journey, and the notion of travel. “We worked so long with Louis Vuitton, and what we wanted for this space was incredible architecture, innovative technology — and art. And I loved the notion of travel, the sense of a journey.”

Weston added that she also wanted the space to stand out: “I wanted this store to be a one-off, something that people would travel to see.” She added that Selfridges secured planning permission for the glass elevator because the hall where the Vuitton store is located had an atrium in the past.

Nicolas said the project was a particularly challenging one because he had to create a three-story structure within a department store. He said he wanted to blend the traditional with the modern, contrasting the classical pillars of Selfridges with the curving “DNA” shape.

The voyage — a recurring theme in the Vuitton collections — also informed his approach to the space, which features different qualities of light on the three different floors in order to conjure how travelers might experience the changes in the quality of light as they move from country to country.

The interiors are in shades of sand, gold and tortoise shell, while materials used include leather, stone and wood. All of the rich, fabric-covered furniture was designed by Nicolas and made by hand, while walls are covered in two layers of fabric, and floating shelves showcase bags and shoes alongside ready-to-wear.

The new unit replaces the original ground-floor Vuitton concession at Selfridges, which primarily offered leather goods, travel items and accessories. Until now, men’s wear had not been sold, and women’s wear was part of a different concession.

“This partnership pushes the more traditional concept of how a multibrand retailer can work with a global brand, and of concession relationships. We like the idea of brands creating unique concepts with us,” she added.

The new unit will offer an exclusive prelaunch of the spring 2014 Icônes collection, inspired by the French designer and architect Charlotte Perriand, and the men’s spring 2014 pre-collection.