Wal-Mart is launching a brand of urban apparel for women ages 25 to 45 called Metro 7, which will be bolstered by a marketing campaign. 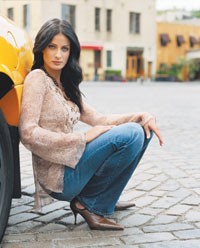 Cyber Monday Sales Estimated Reaching $10B to $12B

The Eataly of Fashion and Lifestyle: Green Pea Democratizes Sustainability

Wal-Mart’s British brand will be joined on Tuesday in 500 doors by Metro 7, a new contemporary line aimed at women ages 25 to 45. The brand will make its debut the same day on the company’s Web site.

Dayanara Torres, the former wife of singer Marc Anthony and a former Miss Universe, is the spokesmodel for Metro 7. She’ll appear in television and print advertising and visit stores in support of the brand.

“She’s a model, international spokeswoman for breast cancer awareness and mother,” said Karen Stuckey, senior vice president and general merchandise manager of Wal-Mart. “She has the right kind of look and exudes the right spirit.”

Metro 7 is the first step in a comprehensive apparel strategy that Wal-Mart executives tout as the salvation to their soft goods problems. The company plans to evaluate its other existing apparel brands and eventually begin tackling the home area.

The new brand will be positioned adjacent to George at the front of apparel departments. Fleming said George will be more successful next to Metro 7.

He declined to comment on reports that Wal-Mart was interested in buying Tommy Hilfiger. “We could build a brand from scratch, reengineer an existing brand or acquire something,” he said. “No Boundaries, Faded Glory, White Stag, we’re going to look at each one of those. We may decide there’s enough opportunity to create a new brand that meets the customers’ needs.”

Wall Street analysts have complained for years about Wal-Mart’s fashion offerings and the opportunity being missed. According to Bill Dreher, a retail analyst at Deutsche Bank Securities, the softlines and domestics categories at Wal-Mart discount stores accounted for about $50 billion, or 17.5 percent, of the company’s total sales of $285 billion last year.

“Wal-Mart is not waiting for the national brands to provide more on-trend merchandise, it’s attempting to go out and develop it themselves,” said Dreher. “That shows a commitment to the apparel category.”

“They lack a contemporary line,” said Robert Buchanan, a retail analyst at A.G. Edwards. “You go right from No Boundaries to George. They need an answer to Bisou Bisou at J.C. Penney.”

Fleming said the advent of the SuperCenter over the past 10 years has created a large segment of upscale female shoppers who only buy food. Wal-Mart is hoping to lure her across the aisle with Metro 7.

“The days of the message being ‘Low prices across the store’ are over,” Fleming said. “There’s a whole level of product where price alone” does not determine a consumer’s choice.

In the spring, Metro 7 will expand into footwear, accessories and jewelry, Stuckey said.

Fleming declined to project a volume for Metro 7. “It will have strong volume with strong profits,” he said, adding, “This is the tip of the sphere. It’s the tip of starting to drive our long-term strategy.”