Will new initiatives be enough to return the world’s largest retailer to the growth track in the U.S.? 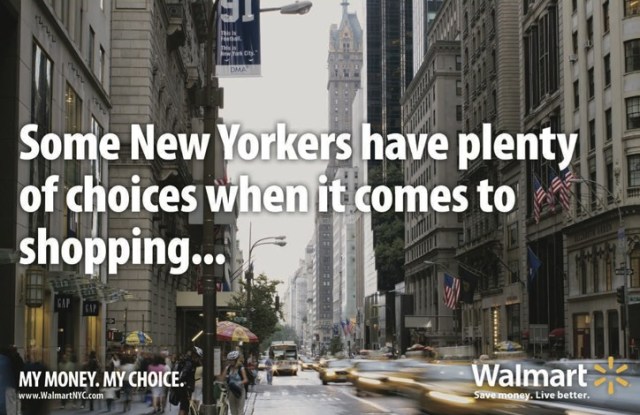 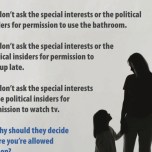 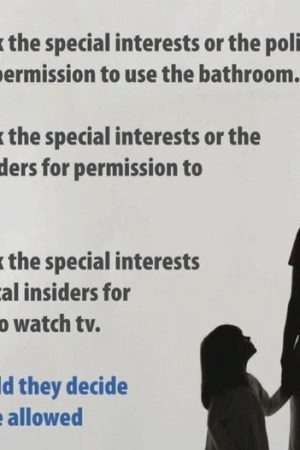 One of Wal-Mart’s “campaign” materials in New York.

NEW YORK — Wal-Mart Stores Inc. is on the defensive once again — and now it wants to play a little offense.

A renewed commitment to apparel, a national ad campaign underscoring its low-price promise, new store formats and a push into urban markets are among the retail giant’s latest strategies. And most of them are fraught with pitfalls in one way or another.

The fundamental question is whether these initiatives will be enough to return the world’s largest retailer to the growth track in the U.S., where it once again is struggling against the much-smaller Target Corp. Wal-Mart’s U.S. stores saw comparable-store sales declines of 1.8 percent in the fourth quarter, their seventh straight drop as the consumers they attracted during the 2008 recession appear to be heading to other retailers now that the economy is improving. Wal-Mart had sales last year of $419 billion, an increase of 3.4 percent over the previous year. For fiscal 2010, Target’s sales moved up 3.7 percent to $65.8 billion from $63.4 billion and comps increased 2.1 percent.

Then there are the retailer’s legal woes. Wal-Mart by virtue of its size has a steady stream of lawsuits to fend off. In the latest news, the U.S. Equal Employment Opportunity Commission said Thursday that Sam’s Club will pay $440,000 and furnish other relief to settle a national origin harassment suit filed by the commission. The suit alleged that Mexican-Americans subjected other Hispanic employees to ethnic slurs at a Fresno club. Meanwhile, the long-running class action suit Dukes vs. Wal-Mart Stores Inc. last week was argued in the Supreme Court as to whether it can receive class status. Wal-Mart wants the court to decertify the class. The court has not yet issued a ruling.

Wal-Mart has made a series of missteps over the last two years that it is only now correcting, such as pushing its apparel offering too far toward fashion and eliminating products that had a local customer focus. Retail analysts have been urging the company to pay more attention to apparel, especially as the economy improved and shoppers who had traded down began taking their discretionary income elsewhere. “Apparel continues to be a weakness for Wal-Mart,” said Carol Spieckerman, president of Newmarketbuilders. “Wal-Mart hasn’t come up with a compelling brand proposition in apparel [in some time]. Wal-Mart ran screaming away from apparel. Now it’s focusing on basics in a trendless environment.”

While the company has had an on-again, off-again relationship with apparel, it appears to have clothing back in its sights. After shifting to a consumables focus in recent years, Wal-Mart said on Tuesday it would bring back brands it had dropped, such as Just My Size full-size, full-figured women’s apparel, and assign more space to apparel as it decreases the size of electronics departments.

“The company has struggled with its apparel merchandising for a decade,” said R.J. Hottovy, a retail analyst at Morningstar in Chicago. “It has to hit all the different audiences that frequent Wal-Mart, moms and dads and also have a little more fashion [for juniors]. I don’t know if apparel will have an impact in urban stores. As you move into the cities the real focus is going to be on the grocery side of the business.”

In addition to helping consumers understand its low-price promise, part of Wal-Mart’s national ad campaign explains that the retailer is returning to shelves 8,500 products that were previously removed, mainly in the food section. Signs in stores reading “It’s Back” identify the returned products, which will be on shelves in May. “It seems Wal-Mart is asking its customers for forgiveness and hoping consumers are aware of the changes it made,” said David Strasser, a retail analyst at Janney Montgomery Scott.

That’s not the only message Wal-Mart wants to get across. The retailer’s battles with community groups continue as it tries to expand into more urban markets, a key part of its growth strategy in the U.S. since its Supercenters already dominate the suburban landscape in most key markets.

Wal-Mart’s intentions to open stores in cities such as New York and Chicago have been welcomed by some politicians but haven’t been embraced by all. The retailer this week reportedly met with its public relations team about a 30,000-square-foot small-format store proposed for the Lakeview section of Chicago, south of Wrigley Field. “There are organized efforts to keep them out,” said Morningstar’s Hottovy. “It was getting very contentious. Wal-Mart’s p.r. movement is in effect. What we’ve seen is that municipalities strapped for cash and tax revenue are more open to welcoming Wal-Mart.”

Hottovy said Minneapolis and Seattle are also markets where Wal-Mart will open small-format stores. “They’re testing how the format works,” he said. “They’re pretty well saturated in suburban markets. This is the next frontier. It gives them a whole other audience. It’s a multiyear process.”

But Wal-Mart’s opponents —particularly those in urban markets it is now aiming to enter —are once again becoming more vocal as they battle the world’s largest retailer and its expansion plans.

Wal-Mart has been campaigning to open a store in New York City for more than a year. After its attempt in 2005 to open a store in Rego Park in Queens was thwarted, the retailer is determined to win this time. The company has reportedly set its sights on The Related Cos.’ Gateway II shopping center expansion in the East New York section of Brooklyn. The retailer has been pulling out the advertising and marketing stops, commissioning polls and studies in the hope of winning in the court of public opinion.

Its efforts in New York unleashed opponents including local politicians, advocacy groups and community leaders that cite the retailer’s negative impact on small businesses and what critics claim is low pay for employees. On Wednesday, a meeting of the New York Department of Housing Preservation and Development to discuss the land transfer to Related for Gateway II — one of the last stages before the developer can begin constructions, — was sprinkled with questions from New York Jobs for Justice, a labor community coalition. “We were hoping ultimately to educate Related on the impact [Wal-Mart would] have on East New York,” said John Kest, director of Urban Agenda and New York Jobs for Justice. “We were trying to bring up technicalities related to the appraisal.”

Wal-Mart Free New York has taken its campaign from the steps of City Hall to the halls of academia, where “Sweatshop, Warehouse, Wal-Mart: A Worker Truth Tour” was held this month at New York University, featuring a garment worker from Bangladesh whose factory supplies Wal-Mart.

“What we’re finding is that some of the louder voices in this debate don’t necessarily represent the majority opinion of New Yorkers,” said Steve Restivo, Wal-Mart’s director of community affairs. “We’re finding that, across the board, the more people that actually get to know the facts about the company, the more they see the value of bringing a Wal-Mart store to their neighborhood. The clear fact is that the overwhelming majority of New Yorkers want Wal-Mart in New York City. We’ve done a number of polls.”

Restivo said Wal-Mart has “leveraged social and paid media to set the record straight. We’ve got a petition signed by 80,000 New Yorkers. Our New York Facebook page launched on Feb. 1 has more than 33,000 ‘likes.’ Combine that with editorial support from every leading media outlet in the city.”

But is the time and attention required to navigate the opposition distracting Wal-Mart executives from other pressing issues, such as improving product offerings and fine-tuning assortments?

“The challenges for any developer today in the U.S. are huge,” said Patrick Fox, president of the Saint Consulting Group. “You have growing opposition to projects. People realize now that they can oppose these projects and win. I call it the Wal-Mart effect, watching Wal-Mart get its butt kicked all across the country, people have seen so many projects defeated that they’ve become emboldened. Social networking makes it easier to organize and you’ve got a lot more people showing up. There’s passion and anger, and that manifests itself in public hearings. People who live near these proposed sites are worried about how it will affect them. Ninety percent of the community may favor the project, but the abutters show up and that’s all the local officials see.”

The retailer’s foes are more sophisticated and better organized than ever. Casie Yoder of Making Change at Wal-Mart said her group’s efforts are “absolutely having an impact. The fact that Wal-Mart feels the need to send mailers and run TV ads in the most expensive market in the country tells you they feel they have something to defend. The conversation is changing from where Wal-Mart wants it to be. Wal-Mart likely wants to build 50 to 100 units to gain market share. Yes, you can find existing ‘as-of-right’ sites [that don’t require city council approval] for your first couple stores, but if you’re talking about dozens of stores you need the city council.” While Wal-Mart has announced smaller-format stores, Yoder said, “They’re kind of unproven and we haven’t seen how they impact the community.”

While New York Mayor Michael Bloomberg has been supportive of Wal-Mart opening in Brooklyn, City Council Speaker Christine Quinn has been a loud anti-Wal-Mart voice, along with Charles Barron, the councilman from the district where Gateway II is located.

Asked whether Wal-Mart has made an effort to meet with unions here, Restivo said, “We have not in New York.”

“It benefits Wal-Mart to get into a community early and have some political support lined up,” said Saint Consulting’s Fox. “It should be reaching out to neighbors and activists. You can see if you can build a project in such a way that can earn their support.”

Wal-Mart tried that approach, in Inglewood, Calif. in 2004 and it backfired. After the City Council rejected Wal-Mart’s proposal for a Supercenter, the retailer got 6,500 signatures for a ballot initiative. Wal-Mart’s campaign included free meals for citizens. But 60.6 percent of residents voted against Wal-Mart.

“Wal-Mart is changing its store prototypes and the size of its facilities,” Fox said. “They’re trying to make it easier to get their stores approved. Years ago, Wal-Mart would just try to push through into a community. If they ran into opposition, they went to the next town. What happened was, they ran out of towns. Now they’re doing more outreach, gathering petitions of supporters and demonstrating that support to local officials. Wal-Mart is so large that anywhere it goes it needs some kind of approval. It could be from the health department or the highway department. For Wal-Mart, New York is a site-by-site fight. Wal-Mart has a tough fight anywhere it goes. All of these people will shop at Wal-Mart as long as it’s somewhere else.”