Buried within the retailer’s Web site, beneath the red sales banners and loud holiday graphics, is a magazine called BeautyScoop. 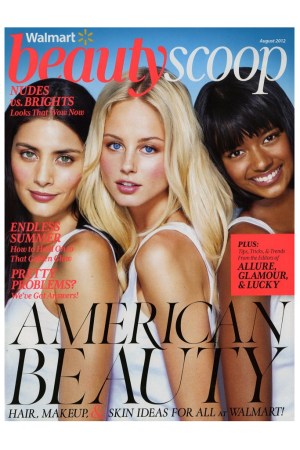 Buried within Wal-Mart’s Web site, beneath the red sales banners and loud holiday graphics, is a magazine called BeautyScoop. Thousands of stores also carry it, and it was mailed to millions of the store’s customers.

Most big retailers fill their stores with custom-published shoppers that double as cheaply made catalogues, highlighting product in stock and coupon dispensers.

BeautyScoop is something else. It has a model on the cover, for one. Its own logo — the name in a large type underneath a smaller Wal-Mart tag. Though wafer-thin — it runs just 12 pages — and produced on glossy stock, it is as close as a store catalogue can come to a magazine. And there are editorial features.

“We’ve got loads of helpful tips and how-to’s,” the copy reads. “At Wal-Mart’s Every Day Low Prices — along with expert advice from the editors of Allure, Glamour and Lucky.”

The nation’s bargain king didn’t convince Condé Nast editors to contribute copy for its skinny shoppazine just based on its charming personality, or a licensing partnership. The entire magazine was made by Condé, sources said.

Wal-Mart Stores Inc. excels at some trades, like mass retail and aggressive international expansion, but one thing it doesn’t do is magazines. And so when it wanted to offer its customers literature to go along with their “every day low prices,” it sought out a little bit of that Condé stardust.

This marriage of convenience takes the old-hat practice of custom publishing to a whole other, and more lucrative, level and advances publishers’ attempts at selling their marketing savvy.

It is also likely to raise eyebrows at Time Inc., which sought out Wal-Mart as the sole distributor of All You, its magazine aimed at Middle America. No doubt executives are asking, “Why not pick InStyle or People StyleWatch?”

The collaboration is secret. Except for its brands, the words Condé Nast do not appear anywhere in BeautyScoop. Wal-Mart, like many corporations, is reluctant to discuss its marketing tactics. Preferable is to take ownership for its own campaigns. It is also likely, given a well-earned image for frugality, Wal-Mart doesn’t want to be too closely associated with a publisher whose image, however creative, is its opposite. The company had several days to comment on this story and did not. Though its executives would no doubt love to crow about their get, Condé declined comment as well. Other sources spoke anonymously because they’re not authorized to speak publicly about Wal-Mart and Condé’s relationship. (Condé is WWD’s parent company.)

Custom publishing is not a new bag. Many airlines publish their own magazines. Other companies strike partnerships with publishers because magazines are their core business, creating a potentially lucrative model for magazine makers. Time Inc., for instance, publishes My Ford magazine. Meredith makes Food & Family for Kraft, and Grape for the supermarket chain Publix. Those magazines target the retailers’ existing audience and do not share any material, much less logos, with the publishers’ brands.

In the last couple of years, major publishers have also increasingly moved to offer big-scale marketers the creative services they would normally get from ad agencies. Two years ago, Hearst Corp. bought the digital agency iCrossing, and Meredith acquired Hyperfactory. Condé does it through its marketing services unit, which was formerly called Ideactive and was absorbed into the Media Group this summer, when several high-profile executives, like Janine Silvera, were let go, and others more versed in new media were brought in as replacements. The publishers see these agencylike units as a way to wrangle more ad dollars from their clients than those already reserved for pages in their magazines.

They’ve had their successes — Condé’s unit already counts Kenneth Cole and Cadillac as clients, but Wal-Mart, with its broad footprint and mouth-watering ad budgets, is Condé’s biggest score in this realm and its shopperzine the most comprehensive campaign.

A year ago, Wal-Mart went to the MediaVest Group, which handles its media buys, and said it wanted to convey an image as not just a place for cheap goods, but as an authority in beauty. In recent years, it has successfully positioned itself as a force in the beauty business; Drew Barrymore’s new fragrance, for instance, will reach 1,500 stores in January. But it lacks the credibility of not just high-end competitors, but peers, like CVS, which have transformed their beauty aisles and seen sales skyrocket.

The partnership was not a natural fit for either company, whose cultures could not be more antithetical. Wal-Mart also has had an uneasy relationship with magazines — in 2003, it halted the sale of Maxim, Stuff and FHM because they weren’t family-friendly enough.

Furthermore, it could have gone to Time Inc., which distributes All You in its stores. But the Media Group sold itself on Condé’s image as an authority in luxury and style. The Media Group offered to create an entire branding campaign for Wal-Mart through a magazine that would “drive action and transaction via an editorial halo,” internal documents said. The magazine would have its own voice separate from Condé, but borrow features from Glamour, Lucky, Allure and Self. The project would have its own editors based in the Media Group; it is in projects like this, for instance, that Ted Moncreiff, the new editor of Bloomberg Pursuits, was involved.

“They had a hot sell: We are the best at this,” said a source.

Wal-Mart bit. The initial plan called for five issues of a 12-page monthly with 500,000 copies in-store, and direct-mail run sent to 2.5 million Wal-Mart customers, sources said. The store trademarked the name in June and the first issue appeared in July; the last, with the headline “Christmas Beauty,” is out now.

The cost of the project is in the millions, sources said, though the magnitude of the investment is unclear.

“In the economy the way it is, it’s not a cheap thing to do. The investment put into this cannot be overlooked,” said a source. “It is very costly.”

The final product was made to Wal-Mart’s orders — nothing too ostentatious, none of Glamour’s sometimes suggestive headlines. More importantly, while it would borrow the aesthetic of Condé magazines — flashy typeface and attractive models — as well as light editorial features, like beauty advice and Q&As, the name Condé Nast appears nowhere in any of the issues.

The magazine is another recent example of publishers blurring the line between advertising and editorial. Last month, Condé, in a deal also brokered by MediaVest, splashed a Microsoft Windows 8 advertorial on the covers of its magazines without a clear label describing it as an ad. Magazines typically observe a strict church-and-state division between ads and editorial. In this case, a magazine is contributing editorial features to an advertiser’s speciality magazine.

Sid Holt, chief executive officer of American Society of Magazine Editors, asked about the magazine by WWD, said BeautyScoop is different from the Microsoft deal because there is a clear line between the editorial content and the promotions. “There’s no attempt to suggest editors from Lucky or Glamour endorsed any of these products,” he said.

For industry observers, the more natural question to ask is: Whose brand image does this help, Wal-Mart’s or Condé’s? “Whether it’s an appropriate use of the brand, it’s really Condé’s decision,” Holt said.

Initially, there were concerns at Condé, sources said. Wal-Mart’s image has never been pristine, a problem that was highlighted again recently over allegations of corruption at its Mexico stores. Executives at the Media Group, sources said, wondered: “Does Condé want to position itself with Wal-Mart?” But the upside was too great.

In addition to the jumbo-sized payoffs, Condé also gets dibs on a major advertiser that isn’t necessarily a natural for its luxury-positioned brands, Wal-Mart pays for the production costs and there’s added exposure for its magazines among millions of discount-conscious shoppers. Plus, it helps them establish a reputation not just as marketing vehicles, but as branders.

Though the fate of the magazine in 2013 is unclear, sources say the two companies are already working on another joint project.