The company's 8,000th store opened on Saturday at the famed corner of Sunset and Vine in Hollywood.

By Faye Brookman and Rachel Brown on December 7, 2012
View Slideshow 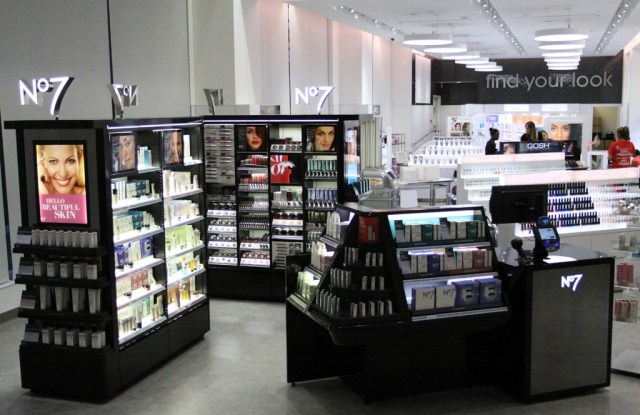 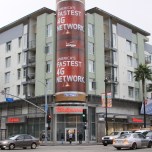 LOS ANGELES — Walgreens revealed a taste of its plans for the Boots portfolio with the opening of its 8,000th store here on Saturday at the famed corner of Sunset and Vine.

Most recently a Borders bookstore, the site once housed the legendary Schwab’s Pharmacy where Lana Turner was discovered. Joe Magnacca, Walgreens president of daily living products and solutions, hopes shoppers uncover the appeal of Boots, specifically the Boots No7 brand, which makes its debut in the store’s Look Boutique following the strategic partnership struck between Walgreens and Alliance Boots last June.

“We thought that being [in] Hollywood, it was the right store and the timing was key to show what we will do with the line next year,” said Magnacca, who added the Boots presentation will showcase new packaging and a fixture adapted from the U.K. “The packaging is spectacular and the fixture blows you away. You can see No7 [signs] from anywhere in the store and from outside the windows.”

Both parties promised more Boots products in Walgreens’ Look Boutiques in the future. “We’re working with our colleagues on how to expand and bring the best of Boots and the best of Walgreens together and, over the next year or so, you will see some trials go forth as we try some different things,” said Gordon Farquhar, managing director of Boots International, during a tour of the store.

Walgreens had the benefit of working with large space to craft the Look Boutique in this store rather than squeezing it into an existing retail setup. The result is that the Look Boutique, which takes up 1,700 square feet out of a total 23,500 square feet, is a gleaming presence at the entrance of the corner store, and Boots No7 has a prime position occupying about 30 feet of fixtures containing roughly 270 products at its front.

The beauty checkout is located in the fixture, offering Walgreens’ beauty advisers the opportunity to provide education about Boots No7, Magnacca said.

“We will pause, measure [results] thoroughly to decide where and how to roll out No7,” he said. Walgreens’ beauty advisers have been trained about Boots both internally and by U.K. Boots representatives.

Even as it moves forward with Walgreens, Boots is not disappearing from its current U.S. distribution of 2,100 doors. Boots launched at Target in 2007 and Ulta in 2011. “We pride ourselves on all the partnerships that we have. Most of all, we owe it to the consumer. They want to find No7 where they shop, and it’s our duty to bring them that,” said Farquhar, who added, “We’ve been growing the brand from nothing, and it’s been growing quite considerably over the past five years. We’ve been growing around 20 percent over the last five years, every year.” Magnacca agreed that exposure in America can benefit the brand’s overall appeal. Boots is also sold on the Walgreens-owned Web site Beauty.com.

In the U.S. market, where the serum Protect & Perfect is the number-one product, a spot it holds globally, Boots has been sensitive to American consumers’ demand for value. Boots has developed kits to respond to that demand, said Farquhar, who singled out a $51.99 Luminate set with a day and night cream offering savings of $10. “[The] U.S. consumer is very knowledgeable about the products, but they also really get regimes. They won’t just use a toner or a cleanser. They want to use the whole regime, so we started to put these together in the kits for people and allow them to get some value,” he said.

Boots No7 shares space within the Look Boutique at the Hollywood Walgreens with some 40 brands. Magnacca said several of the new partners for Look include The Balm, Cargo, Alison Raffaele, StriVectin, Butter London and DDF, which he said is at 10 boutiques. He also lauded the strong performance of Gosh Cosmetics and said, “We’re trying to push that aggressively in the New York marketplace right now and rolling it out to new stores.” There also are brow services by Ramy at the Hollywood location.

Last year, Walgreens began testing its Look Boutique concept at five Walgreens locations outside of the East Coast. “The success was huge, particularly in the natural skin care lines in California and that made a lot of sense,” said Magnacca, who noted there are 42 Look locations in the country now. “We’re full steam ahead relative to the development of Look Boutique….We think we can accelerate this market quite aggressively based on the limited testing that we’ve done so far to date.” The next Look Boutique on the West Coast will open at a Walgreens in San Francisco in May. The next Walgreens’ flagship will bow in Washington, D.C.

Magnacca said each store and Look Boutique is tailored for individual markets rather than a one-size-fits-all approach. The company has stated it sees potential for “several hundred” Look Boutiques.

Magnacca said the brands that have joined Look are performing at or above expectations and that the presence in Walgreens doesn’t cannibalize from other retail doors but builds incremental sales. He added that the six million customers who pass through a Walgreens a day have especially boosted volume for prestige skin care such as Vichy and La Roche-Posay.