Walgreens today is launching Casual Gear, an apparel brand for women, men and children that consists of basics such as T-shirts, hoodies, yoga pants and quilted vests. The collection, which ranges in price from $6.99 to $14.99, will be in all the... 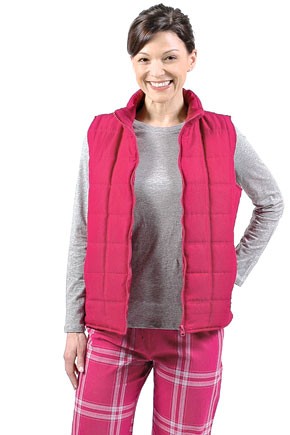 Walgreens today is launching Casual Gear, an apparel brand for women, men and children that consists of basics such as T-shirts, hoodies, yoga pants and quilted vests. The collection, which ranges in price from $6.99 to $14.99, will be in all the company’s 6,200-plus stores by the end of the month.

At the same time, the retailer is raising its profile in Manhattan with plans to open 12 units. Stores recently opened at Astor Place, and Third Avenue and 36th Street. A three-level, 16,000-square-foot flagship will bow in late summer at One Times Square, a building made famous for the New Year’s Eve ball drop. An electronic billboard will cover three sides of the building with about 16,000 square feet of neon.

Walgreens, the nation’s largest drugstore chain, makes no pretenses when it comes to apparel. With 65 percent of its business coming from prescriptions, the company knows consumers aren’t shopping its stores for the latest fashions.

“This is the first basic apparel line available at any drugstore,” said Walgreen Co. spokeswoman Tiffani Bruce. “We’re not making an attempt here to be extremely high fashion. We’re all about convenience and we feel this line speaks to that. At the end of the day, we’re a drugstore. It’s not our goal to compete with some of the larger mass retailers.”

Casual Gear is made by San-Francisco-based Wonderbrand LLC, which was formed by Nick Graham, founder of Joe Boxer, which manufactures underwear and sleepwear for the Nike Inc.-owned Hurley label and Liz Claiborne Inc.’s Lucky Brand, and produces private labels for department stores.

Walgreens is committed to building the Casual Gear business, although Bruce declined to discuss volume. “We think it will be stronger than our current apparel business, which is fairly successful,” she said. “For the most part, this is going to take the place of a sort of scattered approach [to apparel]. The miscellaneous stuff will go away. We think that with the consistency of the offering, we’re going to be able to grow from our initial success with apparel.”

Casual Gear will be merchandised in dedicated departments of 6 feet or 9 feet in every Walgreens store. Long- and short-sleeve T-shirts; tank tops; track, yoga and lounge pants; zip-up hoodies, and quilted vests are available in black, white, gray, pale pink and bright pink.

The line will be updated three times a year. Bruce said there may be a possibility of expanding the offering in some individual stores. “Chainwide, we feel this is the formula we need,” she said. “This is tried-and-true basics.”

“With this new line, we’ve gathered our [knowledge] on what types of merchandise appeals to our customers and we’ve taken our offering to the next level,” said category manager Lauren Vondrasek. “We’ve worked with Wonderbrand in the past and they’ve proved that they can be innovative and do what it takes to meet our expectations.”

A year ago, Walgreens created a division to oversee its proprietary brands. The company has private label hair care lines such as Studio 35, and exclusive brands such as Sally Hershberger and SAMY hair care. There is also the European Beauty Collection, which features seven brands such as ArtDeco’s Caviar Lifting Treatment for $60 and Skincode’s SOS Instant Radiance Serum, $40.

Bruce declined to give an average household income for the Walgreens consumer. Prices on Walgreens’ Web site seem geared to affluent shoppers. For example, Delmar’s 0.75-carat diamond earrings set in platinum were regularly $2,799.99, reduced to $1,399.99. A jewelry line called Pure Allure Crystal Collection is being discontinued. “It was not a good fit,” Bruce said. “There was not enough dedicated space.”