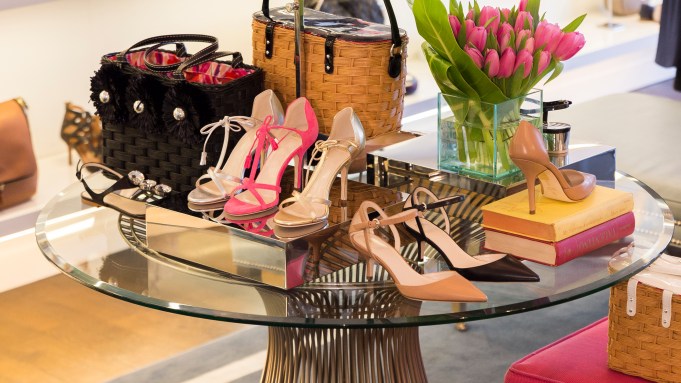 There’s nothing like a product launch to lift a retail business.

“It’s really me starting over and doing it the way I did it the first time,” Spade, who has legally changed her name to Kate Valentine, told WWD. She’s making the store circuit, introducing Frances Valentine to customers around the country. A few days before, she visited Halls in Missouri, and on April 7, she will appear at Nordstrom in Boca Raton, Fla.

For Spade, it’s about working with retailers “who understand me and can be honest about my brand, tell me what’s working, and give me the real feedback,” she said.

It’s also about knowing the players. Halls is in Kansas City, Mo., her hometown, and Spade has a long history with Christina Johnson, one of the owners of  Walin & Woolf, and a former Saks chief executive officer. “We’re friends, Tina and I, from the old days at Saks,” Spade said.

That was when the designer was still involved with Kate Spade & Co., the brand which she hasn’t been affiliated with since 2007. The Kate Spade and Frances Valentine collections have differences, some legally mandated.

Frances Valentine falls within “the high end of contemporary and runs the gamut from sandals and high heels to pumps and espadrilles,” Johnson explained. “It’s a very colorful assortment, creative and very Kate.”

The core of the collection is footwear, though some handbags are offered as well. More will be seen in the fall. Spade considers her new collection “simply modern.”

She said other retailers selling Frances Valentine include Forty Five Ten in Dallas and Lane Crawford in Asia, and on the Internet side, Shopbop and Zappos.

Augmenting the offering seems de rigueur at Walin & Wolff. In the last few years, Chloé, Lanvin, Alexander McQueen, Stella McCartney, Jimmy Choo, Joseph Altuzarra and Zac Posen have been added to the mix.  Contemporary offerings include Randall, Furla, Stuart Weitzman and L.K. Bennett, and there is a line of shoes and accessories under the Walin & Wolff label. Johnson launched Walin & Wolff four years ago with Kim Walin. The two have been cautiously growing the business. Wolff is Johnson’s maiden name.

Currently, there are three Walin & Wolff stores, in New Canaan and Southport, Conn., and in Rye, N.Y. A lease for a fourth store, in New Jersey, is expected to be signed in about 30 days. The chain specializes in designer and contemporary footwear, handbags and accessories.

Johnson said high productivity fuels the desire to open more units. The New Canaan unit  generates $1,800 a square foot; the two others  generate $1,300 to $1,500 a square foot, Johnson said. Both her brick-and-mortar and e-commerce operations are  profitable, she said. The company is based in Port Chester, N.Y., where the business leases a warehouse. She sees the potential to open 20 stores over the next five years. “We continue to self finance this business,” she said.

Manhattan is not on her radar at the moment. It’s more about opening stores on the main streets of affluent towns and suburbs, where the average family income is at least $175,000, and targeting women from 35 to 55 years of age.

“The brands we sell are pretty much exclusive to these local communities,” Johnson said.