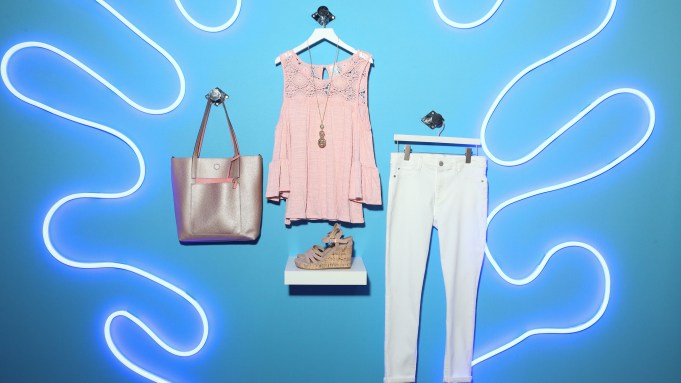 Walmart on Tuesday gave the press an advance look at its three new apparel brands that will launch officially online and in stores on March 1: Time and Tru for women, plus-size label Terra & Sky and Wonder Nation for kids. George, which bowed in the U.S. in the early Aughts, was also part of the program as it is being relaunched exclusively for men for spring.

With Amazon building a portfolio of more than 40 apparel labels, according to research firm L2, and Target launching more than a dozen private brands in apparel and home in 18 months, Walmart is giving the area more attention than it has in a long time. The retailer’s interest in the category seemed to wane in recent years, a fact that wasn’t disputed by Deanah Baker, senior vice president of apparel.

Walmart’s apparel formula is known internally as JUST, which stands for jeans, underwear, sock and T-shirts. “We do a great basics business,” Baker said. “We thought, ‘How much more could we be doing?’ It was time for us to listen to customers.

“We were lacking style,” Baker added. “So we started from scratch. We held focus groups and did an in-depth study. Shoppers made very clear that they want more style from us. We’re not talking runway fashion. It’s on-trend, versatile styles that work for a regular life. They want wearable, understandable fashion. They also want comfort and value. We’ll get feedback after we launch that will continue to guide us. I’m interested in ratings and reviews. We may not have gotten everything right.”

Target, which is known for its data-driven approach, uses focus groups to gain insight on its customers and has even involved them in the creation process of some aspects of its brands. Target’s children’s brand Cat & Jack, which did $2.1 billion in sales in its first year, enlisted a panel of kids who gave their opinions, which were then incorporated into products.

“You’ll see prices are a little bit higher, but we’re giving them a lot. We have jeans that are ripped and repaired, embroidered and re-hemmed. We’re elevating fabrics with stretch — just the right amount. Even T-shirts have been elevated. You have to touch this, it’s made with Modal, and it’s $6.86,” Baker said, holding out a teal T-shirt under the Time and Tru label. Prices for the four brands range from about $5 to $30.

Walmart consumers voiced a desire for quality, Baker said. “We’re fanatical about features and details,” she said. “We do rigorous testing at five stages of development. We test durability — and not just for kids — shrinking, torque, seam strength and color fastness. We want the customer to trust that she can wear each item again and again and it will look as good.”

While Time and Tru, Terra & Sky and Wonder Nation are all new additions, George has gotten a revamp. The line was created by British designer George Davies for Asda in the Nineties and became part of the mix at Walmart in the U.S. after the retailer acquired Asda in 2000. Twilla Brooks, vice president and divisional merchandise manager of men’s apparel for Walmart, said while the label has been carried at Walmart since then, the women’s wear has been discontinued to focus exclusively on men’s wear.

Brooks said George will encompass apparel, accessories and shoes, and like the other new private labels, will zero in on comfort and contemporary style. Stretch has been added to shirts and pants, suede oxford shoes include memory foam and there is an entire poplin shirt offering in different gingham patterns. Swimwear and camp shirts are offered in both subtle and colorful options. “If you don’t have flamingos, cactuses or pineapples on your floor, you’re not relevant,” she said.

As part of an effort to make Walmart a destination for apparel, about 1,000 departments in stores will get a facelift. “We’re making a big capital investment,” Baker said. “We’re offering shoppers a new experience with better service. We’re adding displays and inspirational visual elements for each brand and brighter lighting. All stores will be touched by the new signage. A select number will be overhauled to include open floor plans for visibility and shopping ease, and upgraded fitting rooms.”

Walmart is dropping White Stag, Faded Glory and Danskin Now, while Just My Size will be sold online only. “We’re going for simplicity,” Baker said. “We’ll have fewer brands – four brands – will be more meaningful.”

The common thread between the brands is size inclusivity, which is a growing trend. Target’s Universal Thread bowed with an extended size range. Walmart’s Time and Tru will be available in sizes XS to 3XL. “It’s broader than we’ve ever gone before,” Baker said. Terra & Sky’s sizes will range from 14W to 30W, George, S to 3XL, and Wonder Nation, 4 to 18. “We over-index for plus-sizes,” said Karen Stuckey, senior vice president of private brands at Walmart, noting that the average for retail brands is about 7 percent to 8 percent of all consumers. “Over 15 percent of our [apparel] revenue comes from plus sizes. We added extended sizes in our junior line.”

Walmart is partnering for the launch with celebrity stylist Elizabeth Stewart, who will share her insights on apparel trends for the season.