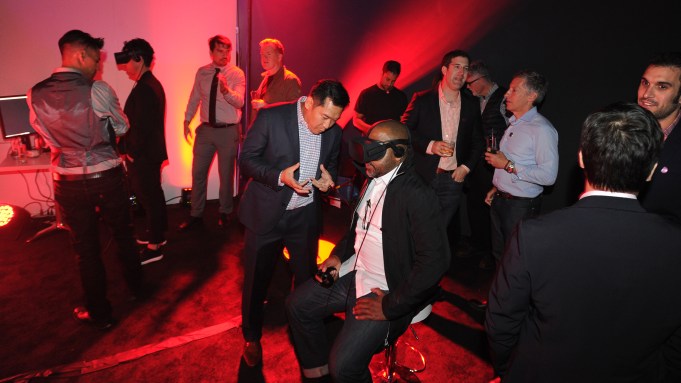 Virtual reality and the technology’s promise was on full display Wednesday night as Wal-Mart Stores Inc.’s Store No. 8 tech incubator toasted winners of its first competition.

The invite-only event, held in Beverly Hills, let the winners of the Innov8: V-Commerce competition — done in conjunction with Arianna Huffington’s Thrive Global and Accenture — present their winning technologies while providing a glimpse into Wal-Mart’s thinking about virtual reality.

Guests arrived at the appointed address before being whisked away in shuttles playing an introductory video on what was awaiting them at the residence of real estate developer James Goldstein. From the drop-off point, golf carts took guests through a thick path of foliage and fog effects, leaving some to muse it was just like a theme park ride.

Guests then walked onto the Goldstein residence’s tennis courts, where they could sample the virtual reality experiences of the five winners: Fyusion’s 3-D images made intelligent with machine learning and computer vision; Obsess’ virtual store; Nurulize software allowing multiple people to experience the same VR shopping experience together; 8i’s holograms used to help customers gauge the fit or drape of an item, and Specular Theory’s Families and Babies safety tool, assisting parents with shopping while keeping safety in mind.

“There’s not a common thread [among the winners], which is what we love,” said Katie Finnegan, principal of Store No. 8 and vice president of incubation for Wal-Mart global e-commerce. “We were very interested in what VR could do as a medium for commerce and so we started building our own experiences. We started that journey seven or eight months ago and then we started to realize as we were in it, ‘Wow, there’s so many more really talented technologists, but the industry hasn’t incentivized around commerce and it’s really been about gaming and education to some extent. So we thought, ‘Let’s do an open call.’”

That open call led to roughly 200 applicants, with about 30 percent of those international. The five selected, Finnegan continued, represent different facets of the VR experience.

“When you pick and choose from all of these different experiences, and what [the winners] excel at, you can collectively see what the opportunity looks like and that’s what we’re hoping to do with this event,” she said. “There’s no one right answer right now, but collectively hopefully we can create that answer.”

Some of the brands partnered with retailers in presenting their concepts. That was the case with Fyusion, which linked with ModCloth to show product in augmented and virtual reality.

Obsess partnered with Rebecca Minkoff on a virtual store, while 8i teamed with Bonobos to show how a hologram could shop for virtual shirts.

Three other virtual reality concepts, in addition to the five winners, were on display, along with the app Itchy Itchy from Parsons School of Design students. The app, when used in conjunction with specially designed clothing, launches augmented and virtual reality experiences its developers believe could only help elevate the meaning behind fashion design. On display were four looks representative of different fears, a concept not necessarily understood immediately upon looking at the garments.

“When you see the clothing, you might not be able to get that idea,” said Kailu Guan, part of the app’s cofounding team of students. “Once you’re in the VR, there’s a lot more room for you to tell the story. We can have video. We can have sound [and] a lot more interaction to tell the wearer what we’re trying to say. So I think that experience adds a lot more depth and connection to who is wearing it.”

Finnegan, when asked about seeing some or all of the technologies in store, said it wasn’t too soon for the consideration.

“There are multiple opportunities,” she said. “It’s bringing it to your home and bringing it to store. Obviously, I think bringing it to store is probably closer than bringing it home just because, as you can probably guess from the setup, they’re wired in. There’s trackers watching where you’re going and that’s definitely a pretty hard installation at your home. But we have a concerted effort to look at what this medium can do when you’re shopping and in particular certain categories that we feel contextual shopping really makes a difference.”

There’s also technology beyond virtual reality to be explored by the industry, she said when mentioning the potential for more competitions moving forward.

“Our mandate is to look at technologies that are going to truly transform retail and so VR is one of them but not the only one,” Finnegan said “We’re constantly looking at what all these technologies can do and what these applications can be. What this event did for this that I thought…was really special was there was a huge opportunity, but we didn’t feel the industry could totally perceive what was available. So we wanted to bring the industry leaders and the technology leaders together to really collectively raise the bar. Whenever that’s a possibility, we want to be moving the needle for the industry as a whole.”

Jared Leto on Investing, Art of the Deal