In between performances by Lady Antebellum, Peter Frampton and One Direction at a Friday morning celebration for Walmart Inc. associates and shareholders, the executive team took to the stage to tout initiatives and “appreciate” the cheering sales associates at the University of Arkansas’ Bud Walton Arena in Fayetteville. Then, in the afternoon, the Walmart leaders fielded questions from Wall Street analysts.

The business portion of Walmart’s annual meeting took place on Wednesday, when shareholders voted on proposals, including one that was presented by Vermont senator and Democratic presidential hopeful Bernie Sanders, who criticized the retailer for paying what he claimed were substandard wages. Walmart’s public response was to post a story on its corporate web site by the Bennington, Vt. SuperCenter store manager, who wrote, “I’m puzzled by how Senator Sanders characterizes us. Perhaps someday he’ll visit my store in Bennington, and I’ll get a chance to introduce him to the Walmart I know.”

Jennifer Garner, the host of the morning’s festivities, did the job with a sunny disposition that belied the early hour — the event started at 8 a.m. Pharrell Williams appeared in a video, praising Walmart’s decision this week to give an additional $24 million, or $5,000, to every store and distribution center in the U.S., to help spark change in their local communities and boosting community grant giving to nearly $70 million this year. “To watch a partner like Walmart step in and understand the beauty and importance of a community being lifted…it’s important, Walmart showing up,” Williams said.

Ratcheting up the tit-for-tat competition with Amazon, Marc Lore, president and chief executive officer of Walmart U.S. e-commerce, said groceries will be delivered beyond the threshold of the front door and directly into customers’ refrigerators. Walmart employees with at least a year’s tenure will make the drop-offs wearing cameras so clients can monitor them inside their homes.

“We’ve added 2,800 popular brands [to the marketplace], and have a new baby registry,” said Lore. “A few weeks ago, we announced that you can receive 200,000 of our top items for free next-day delivery. It actually costs us less to deliver items the next day because they come from one fulfillment center.”

A glaring omission was Jet.com, the e-commerce site started by Lore, which Walmart acquired. Lore instead talked up such technological offerings as Jet Black, the retailer’s conversational commerce service.

“Jet Black brings conversational commerce to life and customers absolutely love it,” Lore said. “More than two-thirds of Jet Black members engage with us weekly, spending on average $1,500 per month. Then there’s Virtual Reality and Augmented Reality. With AR, imagine allowing customers to see things in stores that aren’t physically there, like price comparisons and product reviews.”

Before Lore could finish his sentence, Sofía Vergara stepped onto the stage with a wardrobe upgrade for Lore. “We’ve sold enough pairs of your jeans that if you stacked them up, they’d be four times the size of the Eiffel Tower,” Lore said of the actress’ collection for Walmart. “The line is about inspiring women to work with what they’ve got,” Vergara said. 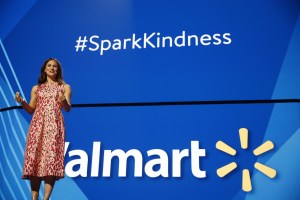 Sam’s Club redesigned the cart and checkout pages on Samsclub.com, with the checkout process 28 percent faster. Ask Sam, a mobile app that associates speak into to get information “is live at all of our clubs and it’s already answered 1.5 million questions,” Furner said.

“There’s the development of what I think is a new business model,” Doug McMillon, president and ceo of Walmart Inc., told analysts. “I can’t tell you exactly what that model looks like in three years. We can see the model moving and changing, and our conversations as we do planning and think about strategy have moved on. It’s a different environment, different conversation and different company than it was a year ago.

“Core retail, store retail, buying and selling the merchandise, first party e-commerce, marketplace and marketplace services will always be our core and focus,” he added. “I think there’s an opportunity to start an advertising business or other things along the way to help build out that ecosystem.

McMillon has no doubt been eyeing Amazon’s growing advertising business, which totaled $2.3 billion in sales in the first quarter. “We’ve got an opportunity to grow an advertising business,” McMillon told analysts, adding that Walmart had an in-store TV plan that sold ads years ago. “That opportunity exists today in an omni type fashion. But we don’t want to harm the customer experience in any way online or in stores.”

Brett Biggs, chief financial officer, addressed a question about gross margin, saying in e-commerce, “we’re talking about leaning in more on apparel and home and getting more of a margin mix, and we’ve been seeing that more. One reason we’ve been so focused on getting expenses down is because it gives the opportunity to do what’s needed from a competitive standpoint while delivering financial results investors are pleased with.”

Commenting on tariffs and a possible trade war with China, McMillon noted that Walmart has been operating there since 1996, and now counts 400 stores in the country. “China is a tremendous business opportunity,” he said. “Sam’s Club’s business has tremendous potential. These two countries are going to be significant for this generation and beyond. Trade overall has been good for consumers and good for the world. Look at its impact across the broad number of people it helps. I hope this gets sorted out.

“A downturn in the economy could bring a consumer who wasn’t shopping at Walmart to the retailer in search of savings. It could present that an opportunity,” McMillon said. “The focus on apparel and improving presentation — those things might help us to keep those customers. We have to make sure the quality is right.”

Store closures are also providing another opportunity to grab new consumers, with Foran saying the shuttering of Payless Shoes and Toys ‘R’ Us are advantages that can play into Walmart’s hand. “There are a lot of store closures at the moment and we keep close tabs on them,” he said. “Tariffs are one thing. There’s a continuous ongoing pressure in the marketplace, but we need to be good enough to attract those customers.”

Judith McKenna, president and ceo of Walmart International, said, “India is a really important part of our long-term strategy. The Flipkart business, as we learn more about it, we find there’s more that’s exciting. It has a strong position within the market. They continue to think about Myntra, the apparel model under Flipkart. It  performs well. Apparel is a really important part of that business because it provides a margin mix.”