The buzzy social shopping site is stepping into the physical world with the help of Nordstrom, which is rolling out wall displays to 107 stores. 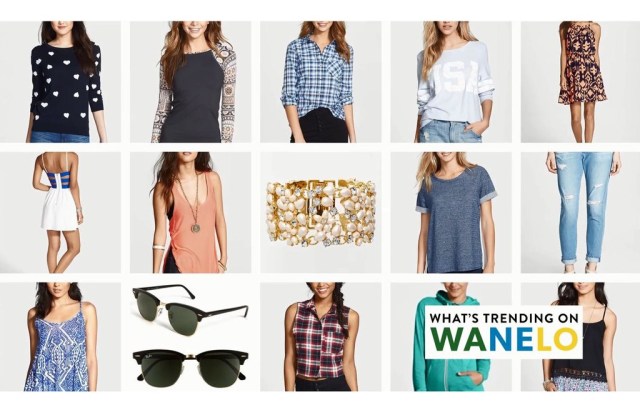 The line between brick-and-mortar and digital retailing is becoming more seamless by the day.

Buzzy social shopping site Wanelo is stepping into the physical world with the help of Nordstrom, which is rolling out wall displays to 107 stores featuring styles that it already carries, but are rated most popular by Wanelo’s users. For the Seattle-based chain, which garnered one million followers on Wanelo in just five months, it’s a chance to tap into the that dramatic growth.

“People are just ready for an experience that is fully focused on shopping,” said Wanelo founder Deena Varshavskaya. “They have been frustrated with not being able to shop on Pinterest or Instagram.”

Since Wanelo — short for Want, Need, Love — officially launched in 2011, more than 11 million users and 300,000 stores have uploaded 12 million products, which have been saved 2 billion times. The company was self-funded for two years before receiving outside investments and, to date, has raised $14 million from firms such as Floodgate, First Round Capital, Red Swan, Ooga Labs and Forerunner Ventures. There are currently 35 employees working out of the start-up’s San Francisco headquarters.

Users can follow stores, friends and influencers — saving items to their profile pages to purchase or organize their shopping.

Users can only post items from verified retailer sites. And once a brand claims its page, it can editorialize collections to engage with fans. Primarily accessed via its mobile app, users can also visit and log onto Wanelo on a desktop.

Nordstrom has 1.2 million highly engaged Wanelo followers who have uploaded more than 200,000 products to the brand’s page. All told, the products have been saved 30 million times, with an average of 343 average saves per item. For Nordstrom, more products are being saved on Wanelo than on Pinterest.

Now, the most-saved products among Nordstrom followers will populate the retailer’s “What’s Trending on Wanelo” displays, which are currently rolling out to the chain’s BP, or Brass Plum, juniors’ department. A TV screen in the department will scroll through about 100 products popular on Wanelo.

“The way that we’re creating these video experiences is by looking at that trending data,” said Bryan Galipeau, Nordstrom’s social media director. “It’s a purely customer-driven strategy. We take a snapshot of that trending category once every week, and we will then match that up against our inventory and what’s available in those stores so we’re providing a good customer experience.”

Galipeau said that the store started seeing heavy traffic coming to its site from Wanelo in the middle of last year — but that much of the insight for the project came from a group of 3,000 teens who make up the retailer’s BP Fashion Board and are avid Wanelo users.

“If you look at that — the merchandise and products that customers are saving really align well with that BP department,” Galipeau said. “We aren’t forcing that. That’s a great connection for us between the BP Fashion Board and the traffic that we’re seeing [from Wanelo].”

Brands such as Urban Outfitters, Sephora and Lululemon are quickly developing followings on the product-centric Wanelo. The majority of content is user-generated — although it’s up to the brands to determine if and how involved they want to get in terms of interacting with the Wanelo community.

For instance, Urban Outfitters has 2.7 million followers — the most on the platform — with 80,000 products that have been posted and saved more than 43 million times. (Saving on Wanelo is analogous to “pinning” on Pinterest.) Urban Outfitters has more followers on Wanelo than any other social network, with its Facebook following approaching two million, Instagram at almost 1.5 million, Twitter at 875,000 and Pinterest at 150,000. The retailer has installed a Wanelo save button on the product pages of its e-commerce site, resulting in a 40 percent increase in product saves and a 20 percent spike in Wanelo-generated sales for the company.

Steve Hartman, Urban Outfitters’ managing director of direct and marketing, said Wanelo has a conversion rate at least four times higher than any other social network. It’s also quickly climbed into the top 10 sources of traffic for urbanoutfitters.com, along with Google search.

Farfetch digital marketing manager Rachel Waller said Wanelo users are converting at a rate five times that of Pinterest. (The online marketplace has 195,000 followers and 182,000 products posted to its Wanelo page.)

Varshavskaya, who founded Wanelo when she was 31, credits the app’s rapid consumer adoption to its singular focus on shopping.

For her, the reason Twitter and Facebook haven’t seen success with commerce is that they weren’t designed to be shopping platforms. When users go to Wanelo, they expect only to see accurate information on product availability and pricing.

“Imagine going to Amazon or Urban Outfitters’ [Web site] and starting to see photos of recipes and landscapes side by side with products,” Varshavskaya said. “That would create a really confusing shopping experience.”

The app is also part of the growing Webrooming trend — where people browse and preview online before coming into a store.

Bridget Dolan, Sephora’s vice president of digital, said: “Our clients are shopping and visiting us from mobile phones in such a rapid, crazy rate that anything that is mobile-centric is popping for us. Instagram is on fire, but Wanelo is the most mobile-centric social media platform that we have.”

Sephora found that 95 percent of the traffic it gets from Wanelo goes to its mobile site. Dolan called the channel a traffic generator for mobile that not only speaks to a consumer shopping on her phone, but one who is “pre-shopping” and creating lists of what she wants to buy.

She said Sephora became active on the platform when it hit a critical mass, with about 400,000 followers. Now, the brand, with 582,000 fans and 23,000 products saved to its page, is spending more time creating collections on Wanelo and views the platform as an up-and-coming tool in terms of traffic and sales.

“It’s 100 percent just about product from your site,” Dolan said. “There’s no tips and no looks. That is how Wanelo works. That is the differentiator from other social media.”

Lululemon, which has 673,000 followers, sees an average of 770 product saves per item. According to Carolyn Coles, the brand’s director of digital channels, Wanelo is the third-largest social channel for Lululemon, driving about 6 percent of social referrals to lululemon.com. The brand has already integrated a social button onto its Web site.

“We are paying close attention to the trending page on our Wanelo channel in order to identify sales trends,” Coles said.

That type of attention could lead to more fertile crowd-based merchandising.