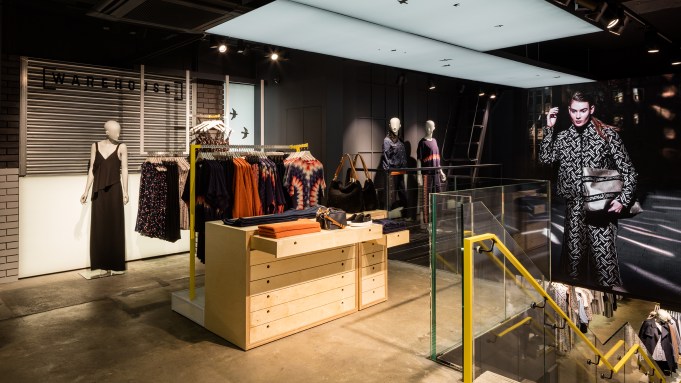 The flagship, at 19-21 Argyll Street, a pedestrian zone linking Oxford and Great Marlborough streets, has sat on the same site since 1979, and the new look is part of a big brand overhaul under Alasdhair Willis and design director Emma Cook.

Although Warehouse has been around since 1976 and currently has about 300 stores, it’s come up against increased international competition in the form of retailers such as Zara, Mango, H&M, COS and & Other Stories, its neighbor on Argyll Street.

That new image is reflected in the flagship, which opened today with details such as manhole covers built into the original concrete floor, lots of black brickwork, a ladder leading up a wall to nowhere in particular, yellow traffic lines on the floor, and a digital film of birds flying across an overcast sky. The space spans 2,700 square feet over two floors joined by a new, cast concrete and glass staircase.

Joe Evans, creative director of the design firm Checkland Kindleysides, said the idea was to create “an abstraction” of London as well as “spaces between spaces.” Customers are meant to feel as if they’re walking between old industrial buildings, with flashes of natural light or vistas every now and again, and a dark, neutral color palette aimed at emphasizing the merchandise.

The layout has been reconfigured so the customer journey flows in a more linear way. Light-boxes are scattered around the space providing visual backdrops of city scenery and skylines, and there’s a light well in the center of the space. The latest campaign imagery, shot by Elaine Constantine and starring the model Vera Van Erp, adorns the walls.

The new format will roll out to Warehouse stores in the U.K. and internationally over the next three years.

Willis, who is brand consultant for Warehouse, said the interiors are meant to reflect the new mission, which is “Warehouse curates the city.” He said the idea is to use the urban environment and experience “as the brand’s palette, with the collision of materials, textures, facades and discovered spaces.”

In an interview earlier this year, Willis told WWD that fine-tuning the brand’s image was paramount. “If you don’t have a clear proposition or point of view you are not going to make it,” said Willis, who has been working on the relaunch for more than a year.

During a walk-through of her first collection, Cook said she wanted to fill what she sees as a very specific gap on the high street. “British-ness — the unselfconscious, mismatched way that British girls dress, the way they mix things and how they’re not committed to a style. They can put a Chanel suit on — pair it with a band T-shirt — and not look like anyone else,” she said, adding her hope is that old and young alike will find ways to wear the pieces.

Her first collection, which debuted earlier this month, includes mannish overcoats and long dresses — some of them rib knits, others with a delicate flower print inspired by oil paintings, and others still resembling slips, with contrasting lace. There are also tie-dyed tracksuits and tailored, flat-front plaid trousers; cashmere sweaters, and corduroy culottes.

The brand has also recently re-platformed its e-commerce site and there are also plans to trim the bricks-and-mortar portfolio, putting a focus on city center stores.