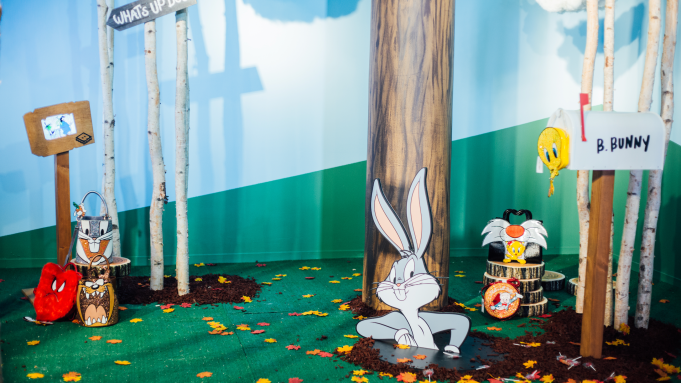 Warner Bros. brought back shades of its retail past and spotlighted its treasury of cartoon characters with today’s launch of an “experiential” pop-up at 107 Grand Street in the SoHo section of Manhattan.

The pop-up, called “The Get Animated Invasion,” is a collaboration with Warner Bros. Consumer Products, content provider Boomerang and BoxLunch, the retailer that donates meals to the needy and sells Warner Bros. licensed merchandise.

Danielle DiFerdinando of the Danielle Nicole brand is the featured designer in the pop-up, which showcases her line of whimsical and colorful character handbags, including a Tweety Bird cross-body minibag; a Bugs Bunny bucket bag with a carrot on the handle, and a Marvin the Martian backpack, among other handbag styles. She’s also designed one of the several Marvin the Martian helmeted space clones on display. Hers has a fur plume, LED lights and jewelry. “I’m playing with textures, cutouts, metallics and glitter,” the designer said.

“As a child watching Looney Tunes, the idea of bringing the animation to life always fascinated me,” she said. “With a keen sense of retaining the characteristics of each character, we created a line of urban, edgy street style with a modern twist…while still staying true to the Danielle Nicole brand.”

The cartoon handbags are for sale in the pop-up’s shop, which also sells licensed T-shirts, hoodies, hats, pins, jewelry, wallets, backpacks and gifts, with products designed by such brands as Trunk, Junk Food, New Era and other firms. Adjacent to the shop is a Flintstone’s ice cream bar with custom flavors from Milk & Cream, nearby on Mott Street, and Post Cereal.

The Warners Bros. pop-up is not a standard pop-up format focused on selling merchandise. It “reimagines” the brand’s famed cartoon characters situated in scenes from the cartoons, like Daffy Duck by a bed of carrots, the falling anvil on Wile E. Coyote’s turf, and Bugs Bunny in the forest. There’s also a Jetson’s screening room, Scooby-Doo’s spooky woods and Tom and Jerry’s house. The sets, sprinkled throughout the 4,500-square-foot space, are photo-ready and Instagrammable. There is also a fleet of Marvin the Martian Funko Dorbz customized by DiFerdinando and other designers. The Dorbz will be auctioned off for charity.

“The Get Animated Invasion pushes the boundaries of fan engagement, blurring the lines between art, content and commerce,” said Pam Lifford, president of Warner Bros. Consumer Products. The pop-up, open only through Sunday, has been timed in conjunction with New York Comic Con.

Boomerang is a video streaming service launched in April through a partnership between Time Warner’s Turner and Warner Bros. BoxLunch sells licensed Warner Bros. merchandise at its 74 retail doors and online.

Warners Bros. had a 10-year run in high-flying retail until early 2001 when it said it would close its New York flagship, which was on the northeast corner of Fifth Avenue and 57th Street, where Louis Vuitton now stands, and also close the rest of the 130-unit chain in the States. Three years ago, Warner Bros. Consumer Products and Eight O’Clock Coffee partnered on a pop-up in Manhattan re-creating the Central Perk coffeehouse from the “Friends” sitcom.