Designers have always been coy on the subject of liquidating unsold merchandise, and off-pricers have played along by keeping brand names out of their advertising and marketing efforts. But the Web has removed the mystery from discounted designer... 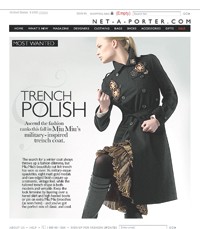 Designers have always been coy on the subject of liquidating unsold merchandise, and off-pricers have played along by keeping brand names out of their advertising and marketing efforts. But the Web has removed the mystery from discounted designer clothing. Now, anyone with a computer and an Internet connection can immediately see a plethora of marked-down designer apparel.

Choosing a channel for unloading leftover styles seems to be a matter of personal preference — and economics. Some designers can’t stand the idea of their garments dangling on wire hangers at off-price stores. For them, fashion e-tailers have become new retail accounts.

Shoppers logging onto Bluefly.com will see a large selection of contemporary fashion from Twelfth Street by Cynthia Vincent, A.B.S., Tufi Duek, Shoshanna, Jill Stuart, Vera Wang and BCBG MaxAzria at discounts of 20 to 75 percent. The Web site conveniently calculates the savings for each item. “You save 52 percent,” informs a listing beneath a Michael Kors dress discounted from $2,800 to $1,344.99. Chloé’s popular Edith handbags are available in six colors for $1,328, a 20 percent savings off the original $1,660. Styles from Gucci, Prada, Hermès, Tod’s and Ferragamo are featured at similar discounts.

“Everyone knows that every brand today has products offered on sale at some point in their life cycle,” said Bluefly.com chief executive officer Melissa Payner. “You’re not going to hide it by sending it to Loehmann’s or TJ Maxx or Daffy’s. There’s no ability in the off-price stores to maintain the integrity of a brand. You send to Century 21 and, at the very best, it’s placed on a rounder, but half of it falls on the floor with other brands. Our photography style is upscale.

“We’re not only buying merchandise that’s off-price, we’re specifically buying into the trends of the season,” added Payner. “We’re going to only take what’s really important and present it in the most upscale presentation. We’re not the low-price leader. If we were, we’d have to take everybody’s junk.”

Yoox.com, based in Milan, sells out-of-season designer apparel and accessories at a discount, but that’s not its whole business. The company also carries current merchandise at full price, acts as an incubator for emerging talent and is partners with designers on special projects such as a lingerie collection from Dolce & Gabbana made from excess fabric. “We take products that we feel are still viable and that we think we can sell,” Hilary Bowers, a Yoox spokeswoman, said. “It can be products they had in their stores that didn’t sell through.”

Bowers said Yoox, which features Roberto Cavalli, Prada, Balenciaga and Missoni, has been the beneficiary in recent years of larger production runs. “The more [garments] designers make, the less expensive it gets,” she said, adding that having a partner like Yoox allows designers to order more garments than they normally would. “They can have a space that allows them to maintain their brand’s image and achieve sell-throughs.”

Nicole Miller sells a variety of designs to e-commerce sites. Online is a growing part of the company’s business. “They’re additional retailers,” Bud Konheim, ceo, said of fashion Web sites. “They’re really good retailers.” Miller has a strong presence on discounters such as Bluefly.com and at full-price online stores like E-dressme.com, nordstrom.com, bloomingdales.com and neimanmarcus.com.

Online specialty stores buy current-season merchandise directly from manufacturers and sell it at full price, taking markdowns at the same time as their brick-and-mortar counterparts. Some of the more developed online businesses, such as saks.com, have their own buying teams that function exactly like the ones for physical stores. Denise Incandela, senior vice president of Saks Direct, said 70 to 75 percent of the merchandise on saks.com is the same as that in the company’s stores. The rest could be items from existing brands aimed at a younger customer, or different brands or different categories. Incandela said saks.com will be the company’s second-highest grossing “store” this year, after the Manhattan flagship.

“We regard everybody as an equal buyer,” Konheim said. “The advantage of e-commerce is that you can shop from the comfort of your home, and the photography is very good. But you don’t have instant gratification and you don’t get to touch the product with e-commerce. Also, everybody gets to look at a Web site and see the discounts. You want to protect your regular-price business. This is a very careful kind of distribution. We don’t want to cannibalize our [department and specialty store] business.”

Richard Jaffe, a retail analyst at Steiffel Nichlaus, said selling to brick-and-mortar off-price stores was preferable to liquidating online. He questioned the ability of e-tailers “to pay and pay regularly and command the highest price,” and said designers might better protect their images by selling to off-pricers rather than exposing their excess inventory to a much larger audience online. “If you go on the Web, it’s public information that you’re selling your goods at a discount,” said Jaffe. “If you sell it to TJX, it disappears into the maw.”

But many designers object to the maw, where shoppers ransack racks for bargains, leaving garments all the worse for the wear.

“We used to sell to Century 21, Loehmann’s and a couple of others, but we don’t intend to do that any more,” said Bernard Aiden, ceo of Catherine Malandrino. “We have our own stores and an e-commerce site. Off-price stores really are not good for the brand. I prefer e-commerce or opening more stores. I’d even rather have an outlet store. I’m working on opening one at Woodbury Commons [in Harriman, N.Y.]. Designers are emotional about the way their clothes are treated. There’s no respect at off-pricers. The clothes are thrown on the racks. I want to see the collection treated the way it was designed to be treated.”

Consolidation in the retail industry has left designers with fewer department stores with which to do business. Selling to off-pricers is no longer just a means of disposing unwanted goods; it can become another much-needed profit center.

“You used to have two major department store customers, Federated Department Stores and May Department Stores,” Jaffe said. “Now, there’s only one — Federated. Whatever leverage you had, wherever you could have played one off the other, that’s gone.”

According to Jaffe, Fed­erated closed 78 stores after the merger, which has resulted in $2 billion to $2.5 billion in lost inventory.

“How do you make it up?” he asked. “With off-pricers. Because of the lack of costs associated with department stores, you sell highly profitable additional units. The economics are very intoxicating. Name a designer who doesn’t want to grow the top line.”

TJ Maxx has found enough willing suppliers to “execute a more upscale merchandising approach in which the merchants aggressively seek out the most exciting product at prices reflecting excellent value,” said Todd Slater, a retail analyst at Lazard Capital. Selected stores have been selling designers such as Dolce & Gabbana and Jil Sander at 50 to 60 percent off.

Off-pricers buy much of their inventory directly from manufacturers and have been making exclusive deals with brands the same way department stores do. TJ Maxx obtained the license to sell Willi Smith’s WilliWear label in 1996 and carries it exclusively. The stores sometimes score big quarry. Several years ago, TJX bought excess inventory from Blackglama. Mink coats were sold in about 50 TJ Maxx locations for $4,999 to $12,000. Every store had a velvet rope around the coats and an armed guard.

“We’re all in the same business because we’re all looking for a piece of the same pie,” said Marsha Wilson, ceo of Daffy’s, which operates 18 stores in New York, New Jersey and Pennsylvania. “Because we’re so fashion conscious and so value conscious, our position is basically the same today as it’s always been. There are a lot of manufacturers that cut specifically for the outlet stores. It’s not necessarily the same merchandise. They’ll take last year’s fabric for the outlet or off-price stores. The stores don’t care if it’s dated fabric as long as they get the label because that’s what’s important to them. We’re not big enough to have clothes made for us. I don’t have hundreds of stores to fill. We’re just opportunists. For us, there’s enough to go around. We haven’t had a tremendous amount of difficulty” finding merchandise.

“We’re pretty much buying directly from [manufacturers] what they have available at the best available price,” said Fred Forcellati, vice president of advertising and creative at Loehmann’s. “Why is there so much merchandise out there? When things are good, everyone’s producing more and there’s always excess on hand. But there always seem to be goods available. We’re there for the consumer and we’re there for the industry. The industry likes us to be there, but they’d never admit it.”

Web merchants that sell discounted designer fare are sensitive to a designer’s conundrum: wanting to liquidate leftover fashion, but doing so in the quietest way. “Some manufacturers use us as a discreet channel to clear inventory out,” said Jacob Hawkins, senior vice president of online marketing at Overstock.com, which offers Ferré leather jackets for $149.99, an 80 percent savings from the original price. “You can get great brands at discounted prices. Out of courtesy to the brands, we don’t discuss the names [in print].”

While sales at Bluefly.com rose more than 30 percent in the last quarter and the company expects to do $60 million in sales in 2006, Payner said she was still rebuffed by some designers. “Some brands say they’ll sell you everything,” she explained. “Other designers say, ‘As soon as you’re big enough, I’ll sell to you exclusively.’ We carry a lot of contemporary designers, but no misses’. We have 150 new styles coming in every day.”

Like all retailers, Bluefly.com looks for exclusive products to give it an edge over the competition. “For the most part, designers aren’t manufacturing specifically for us,” Payner said. “If we’re very successful with something, we might ask a designer to make it for us again or we might ask them to make it for us in other colors. The more we do that, the more we differentiate ourselves. Whenever we do those kinds of things, we’re very successful.”

But Payner has no illusions about the reasons people shop at Bluefly.com. “It’s been a long time since anyone wanted to brag about paying top dollar,” she said. “Last year, we had waiting lists for discounted Fendi Spy bags.”

Natalie Massanet, founder of Net-a-porter.com, designed the e-commerce site to resemble a fashion magazine with editorial content. It’s about as close as you can get to a high-end specialty store, restricting markdowns to carefully defined sale periods. “In the beginning, we were fighting the perception that the Internet was low-frills, discounted goods,” said Massanet. “Quite a few companies operating in the online fashion space are focussed on previous-season discounted goods. Our proposition is getting the products at the same time as the stores and ordering directly from the brands.” When merchandise on Net-a-porter goes on sale, it’s usually marked down 35 percent. “We’re not known as aggressive discounters,” Massanet said.

“Net-a-Porter approaches us as any other retailer would,” said Aiden. “They look at the collection at the same time as Bergdorf Goodman and Neiman Marcus. It’s really another distribution channel, except they look at certain criteria, like items with more visual interest and details rather than more basic pieces.”

“Retail is working and e-commerce is working,” Konheim said. “Which one gets stronger in the future? Who knows. The convenience factor of the Internet is unbelievable. E-commerce is a growing part of the business.”