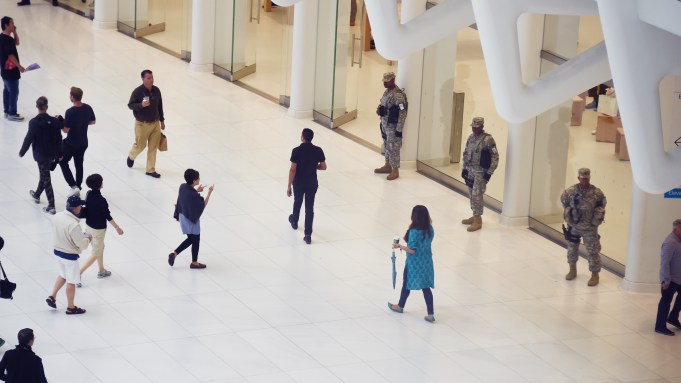 NEW YORK — Business is tough and could get tougher in the aftermath of the terror attacks in the Chelsea neighborhood of Manhattan; Seaside Park, N.J., and at a Minnesota mall on Saturday.

As public officials were vowing not to let terrorists dictate how Americans lead their lives, some retail sources suggested the events of the weekend could feed into a pre-existing hesitancy on the part of some consumers to visit stores, malls and other public places where there are large gatherings, stemming from the recent acceleration of terrorist activity around the world.

On Monday, 23rd Street in Manhattan remained closed between Sixth and Seventh Avenues. While the events dampened the mood for shopping — which was further complicated by some public transportation getting rerouted — a great sense of relief and confidence in law enforcement prevailed through the city after a suspect in the bombings was arrested.

“The reality is terrorism has been part of the conversation for global brands, unfortunately,” said Simeon Siegel, retail equity analyst at Nomura. “The retail environment is very challenged and this is yet another thing that retailers have to take into account.”

Siegel said the bombing in Chelsea probably wouldn’t slow spending by shoppers living in New York, but it could impact tourism.

“In the aftermath of the European attacks, companies talked about and still are talking about softness in those regions,” he said. “There’s a general unease across the globe right now and I think New York has had tourism issues for various reasons. This doesn’t help.”

What did help was the stepped-up presence of police and national guardsmen around New York City and its landmarks including St. Patrick’s Cathedral, Trump Tower, Westfield World Trade Center, Grand Central Terminal and Times Square, due to the weekend attacks, as well as the meeting of the U.N. General Assembly that brought President Barack Obama and dignitaries from around the world into New York City.

Wall Street started out Monday on the upswing, as gains among energy companies overwhelmed any anxieties about the return of terrorism to New York. But by midday, even with the alleged bomber in custody following a gun battle with authorities, markets faltered and traders turned their attention back to whether the Federal Reserve would signal an interest rate hike after a meeting of key policymakers ends on Thursday.

In the months and years since September 11, 2001, retailers and malls have stepped up their security measures, putting in surveillance cameras, tightening communications with law enforcement agencies and adding security personnel and increasing training for emergency situations. Given the measures already taken, there wouldn’t be much more left for retailers to do. As a Macy’s spokeswoman told WWD Sunday, “As we do everyday, we will have full security coverage to ensure the safety of employees and customers.”

“If you are running a store, you could ratchet up security, get everyone to be more vigilant and maintain a greater sense of awareness,” said one former top-level retail official. “You make sure you lock up areas under construction so someone doesn’t leave something there. But there is only so much you can do. They are not going to put metal detectors in.”

Between 23rd Street still being shut down for the investigation of Saturday’s bombing, which left 29 injured, as well as the U.N. gathering, “It would be tough getting around the city for a while,” impeding shopping activity, the official said. “Some people will obviously be nervous for a while, and think twice about going out.”

“I don’t think from a security perspective there is any more retailers can do,” said another retail expert, who requested anonymity. “Police are all over the place. St. Patrick’s is so protected. Seems like there are five cops on every corner.” Next door at Saks Fifth Avenue around 1:30 p.m. there were shoppers in the store but the main floor seemed a bit light on traffic. The rainy weather could have contributed.

“In light of the recent bombings, retailers in New York and across the country are fully prepared to implement their top-level emergency plans,” said Bob Moraca, head of loss prevention for the National Retail Federation. “That includes encouraging personnel and shoppers to maintain a heightened level of vigilance at all times. But this is not just a reactive posture, because all year long retailers work as partners with federal, state and local law enforcement. Much of that starts with a high level of communication in order to keep abreast of any and all threat updates. Retailers large and small are prepared to take whatever action is necessary to best serve their employees and shoppers in communities where they operate. Consumers should rest assured that retailers are working with first responders to prepare for any emergency that may arise.”

On Monday, a suspect was arrested in Linden, N.J., after a shootout with police, The man, identified as 28-year-old Ahmad Khan Rahami, was wounded in the shootout. He is believed to be responsible for both bombings in Chelsea and Seaside Park, N.J, and was seen in surveillance videos planting the bombs on 23rd Street in Chelsea, and another on 27th Street which did not go off.

“The first thing you should know is that in a post 9-11 environment, we are always on a heightened level of alert. Shopping centers have taken a number of steps in last decade,” Stephanie Cegielski, vice president of public relations for the International Council of Shopping Centers, told WWD, citing increased surveillance by cameras and law enforcement, and protective barriers against vehicles running into buildings. She also cited regular training with local law enforcement to assure that response times are appropriate and running drills.

In addition, about 30,000 shopping center security personnel over the years have received training at the Stephenson National Center for Security Research and Training at Louisiana University through a program certified by the Department of Homeland Security.

“Retailers and shopping center owners are always reviewing their security procedures in light of any attack that happens,” Cegielski said. “People are still planning on going to the malls for the holidays and feel that the mall is a safe place.”

To get a better read on consumer sentiment, the ICSC has been conducting a holiday survey in which consumers are asked if they feel safe going to malls. The results will be released in about three weeks.

In Manhattan Monday morning, retailers en route to the Designers at the Essex House show Monday morning saw a police K-9 patrol at the JW Marriott-owned hotel’s Central Park South entrance. Security roamed the lobby and visitors were asked to show their hotel keys to access the elevators. At the entrance to a conference in the Grand Salon, a sign spelled out that no weapons were allowed inside.

In Times Square, 10 NYPD SUV-style vehicles were parked near the entrance to NASDAQ, where two security guards in business suits stood guard on the sidewalk. One of the two men, with a Semper Fi lapel pin, said simply, “Constant vigilance. See something, say something.”

Three officers armed with machine guns stood outside of the Citizen store in Times Square, occasionally fulfilling tourists’ requests for directions. Inside, store manager Eric Otero said Saturday’s incident in Chelsea had the opposite expected effect on store traffic. “The Square was abnormally busy afterwards. Two hours had passed before I’d heard what happened.” he said. “Basically, it pushed everyone into Midtown. Saturday wound up being the busiest day of the week for us with sales 15 percent ahead of the past few Saturdays.”

By noon, Monday’s foot traffic was lighter than the norm and the absence of Times Square’s costumed characters may have been due to the rain, Otero said. While police officers are always in the area, they seemed to be standing in more central areas, he said. “Ever since the terrorist attacks in Nice, things have become more secure. You don’t see as many crazy people making a scene. The cops have done a really good job of easing people’s nerves,” Otero said. “Unfortunately, for me, this all seems normal.”

Walking through Times Square, Vera and Knut Severson said they were trying to get familiar with the neighborhood since they’d just arrived Sunday from Norway. The couple said they read about the attack beforehand but they had no intention of rescheduling their plans. “It can happen anywhere in the world,” Vera Severson said. Eager to take a helicopter ride over the city and to see a few museums, Knut Severson said, “You have to remember Oslo has a population of about 600,000. Here, there are 8.5 million.”

“The best part about New York is just to feel New York,” his wife added.

In an e-mail to students Monday, FIT president Joyce Brown said city and state police may be seen in and around the campus as the investigation into Saturday’s incidents continue. The e-mail noted that West 27th Street had reopened, and all classes and activities would take place as scheduled. Brown also encouraged students to stay in touch with their families and to monitor FIT’s site and their e-mails for additional information.

David Bardani, manager of Unlimited Jeans at West 23rd Street, described Monday’s traffic as “a bit quiet.” The store couldn’t open Sunday due to street closings. In the store Saturday night, Bardani said first responders and police were on the scene within minutes of the explosion. By Monday, shoppers no longer seemed concerned about the situation, he said. “It’s back to normal — that’s how we are. We’re New Yorkers.”

At Burlington Coat Factory’s Sixth Avenue store near 23rd Street, a cashier said after the explosion pedestrians started running inside for safety. The store reopened Monday after Sunday’s forced closing. A manager, who declined to give his name, said, “It did affect the business but we’re just glad that all our associates are safe.”

Despite Monday afternoon’s steady rain, pedestrian traffic near Herald Square was normal, according to an H&M security guard. At Macy’s flagship, two main-floor sales associates, who declined to give their names, agreed. One woman said of the fairly busy area, “It’s Macy’s. It’s the history. We get a lot of tourists. If they’re going to come, they come.”