RTW: Barneys Co-op and a group of designer stores at the Time Warner Center are helping to revive Manhattan’s Upper West Side retail scene. 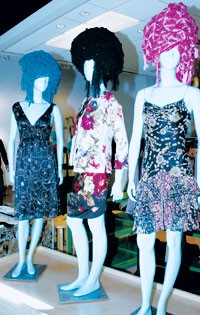 NEW YORK — Mismatched letters spell out “Courageous” on one wall in the new Barneys Co-op on the Upper West Side.

It might not be intentional, but considering how spotty the area’s retail scene has been in recent years, the word very well could describe the flurry of stores heading North to open outposts.

Barneys Co-op and a smorgasbord of designer stores at the Time Warner Center may have rubber-stamped the area for big-brand retailers, but a bevy of independents like Steve Alan and Boyd’s are trying to stake their ground in an area that has been largely known for its nondescript style.

Michael Celestino, executive vice president of stores for Barneys New York, said of the new store, “It’s much better than our wildest dreams. It’s an up-and-coming neighborhood. We knew we have a lot of customers there, and there’s a lot of great traffic on Broadway.”

Others will soon be vying for those shoppers. Steve Alan bows next week at 465 Amsterdam Avenue. On Columbus Avenue, Boyd’s will open within the next two weeks. Kiehl’s welcomed its first customers Friday, as did Jubilee New York, a shoe store at 2169 Broadway in what used to be a Skechers store. Shen New York debuted last month at 311 Columbus Avenue, while Eileen Fisher and Blades Board & Skate have expanded stores at 341 Columbus Avenue and 120 West 72nd Street, respectively.

Rents per square footage on the Upper West Side are still relatively reasonable for stores 1,000 square feet or smaller compared to spaces on the tony Upper East Side, according to the Real Estate Board of New York’s spring 2004 retail report. The asking price on Broadway between 72nd and 86th Street is $240 per square foot, a bargain compared to $676 on Madison Avenue in the Sixties.

In a space reminiscent of a general store, Steve Alan will offer its own label, as well as 10 other designers including Myshkin and Margiela Line 6. The company’s namesake and designer said he enjoys tweaking new stores to suit the neighborhood. The uptown store will be a replica of his other store in TriBeCa.

“The needs of a lot of groups are not being met. There are moms, daughters and young single people. It’s such a big area,” he said. “Unlike SoHo, which is one area, the 60s, 70s, 80s and 90s are four different areas, really.”

Alan, a former Upper West Side resident, regularly visits Roslyn, his mother’s Columbus Avenue accessories store. He is well aware that her 20-year-old business is an anomaly for the neighborhood.

At Barneys Co-op, a wide range of shoppers have been buying Vince, Ella Moss, Moth Balls, Generra, James jeans and other labels. Before and after work, commuters buzz by on their way to Broadway’s busy 72nd Street subway station. Mothers roll in with their baby carriages in the afternoon and “people who are just out and about” pop in during the early evening. “It’s a neighborhood store,” said Celestino, adding the company spent about 18 months searching for the right spot.

Eileen Fisher opened a 3,000-square-foot store in the Time Warner Center last year, and renovated its Columbus Avenue store last month. At the Columbus Circle store in Time Warner, Eileen Fisher is pulling in tourists and other new customers, as well as giving its existing shoppers another option, said James Gundell, vice president of retail and e-commerce.

Meanwhile, 15 blocks north, the company overhauled its Columbus Avenue store with a new facade, floor, lighting, stockroom and walnut fixtures. The investment reflects the company’s confidence in the area, a company spokeswoman said.

Kiehl’s is also trying a softer sell to acclimate itself to the largely residential neighborhood. Instead of advertising its new 1,150-square-foot store at 154 Columbus Avenue, Kiehl’s is picking up the tab for the restoration and upkeep of Central Park’s Adventure playground — a spot teeming with Upper West Side children and their parents. A playground sign identifies Kiehl’s as the underwriter and lists the new store’s address.

Kiehl’s is also trying to convey that neighborhood-friendly feeling at the store, where water dishes make an outdoor waiting area for dogs. Indoors, a vintage motorcycle is on display. Shoppers can use a dedicated iPod and learn about Kiehl’s biker tradition.

Later this month, Kiehl’s will have more competition, when Boyd’s moves in seven blocks north. Well-established with Upper East Siders as an eclectic emporium, Boyd’s decided to head west to a 5,200-square-foot store at 309 Columbus Avenue, due to demand. Furs will be among the offerings in the new store, as well as cosmetics, accessories, children’s clothing and a pharmacy. First-year projected volume should fall between $5 million and $10 million, said Marc Acker, vice president of Boyd’s.

“Everyone has been asking us for years to come to the West Side. This will be a destination,” said Acker.

One of its neighbors, Really Great Things, has managed to become a destination in its 27 years in business by offering up-and-coming European designers and then dropping them to find the next one, said Ryan Zentner, owner. He said he welcomes the new stores, but doesn’t expect them to have much bearing on his regular customers, since his merchandise is so selective and he doesn’t depend on walk-ins. Other than its own label, the retailer declined to name others for competitive reasons. Restaurants of the same caliber as nearby Ouest, ‘Cesca and Nice Matin are more likely to boost business, by drawing more people to the area, he said.

Having been on the Upper West Side store for so many years, Zentner remembers when the area was hopping in the Eighties and early Nineties, thanks to Charivari and other independent-minded stores. “What was great is people came from all over,” he said.

Really Great Things now has a store at 284 Columbus Avenue and opened a second one at 300 Columbus Avenue about a year ago. Despite his healthy sales, Zentner said, “The problem that’s killing us is the rent. I’m very happy with my numbers, but the rent takes the air out of the bag. You have to be so good to survive.”

Paying nearly $150 per square foot, Zentner said he recently looked at a space in Beverly Hills for half that much. Then there’s the issue of stylishness — or lack thereof.

“When you look at people, you don’t really see fashion in the streets,” Zentner said. “My customers buy — they buy. But where they wear it, I don’t know.”

The Thomas Pink store in the Time Warner Center aims to save Mandarin Oriental Hotel guests the hassle of shopping altogether. As of this month, the company is offering “in-room shirt service” to hotel guests 24 hours a day. The Mandarin’s concierge will hand-deliver Thomas Pink 170-thread count shirts, as well as other items freshly pressed or in the brand’s signature pink box.

The Mandarin Oriental and the Time Warner Center’s top-notch restaurants like Café Gray and Masa have helped to attract well-heeled shoppers to Montmartre’s store there, said co-founder Moshe Toledo. That location has been “a great surprise,” outselling the Montmartre’s other four stores. Employees from AOL, HBO and CNN, which have offices in the space, are also helping business, he said.

The average purchase ranges from $150 to $250, well above the $100 to $150 in the other stores. Twinkle, Olga Kapustina, Jim Michelle, Rebecca Taylor and Nanette Lapore are some popular brands. Many women still can’t buy enough designer jeans, which retail between $150 and $170, Toledo said.

“People in New York are very educated. They know what they want,” Toledo said.

He and his brother Avi have seen their share of changes since they first opened an Upper West Side store in the early Eighties. “New York is definitely becoming more upscale. The Upper West Side was always strong but it’s never gotten the luxury of being cool,” Moshe Toledo said. “But you have Lincoln Center, the park, the Reebok Club — this is New York.”