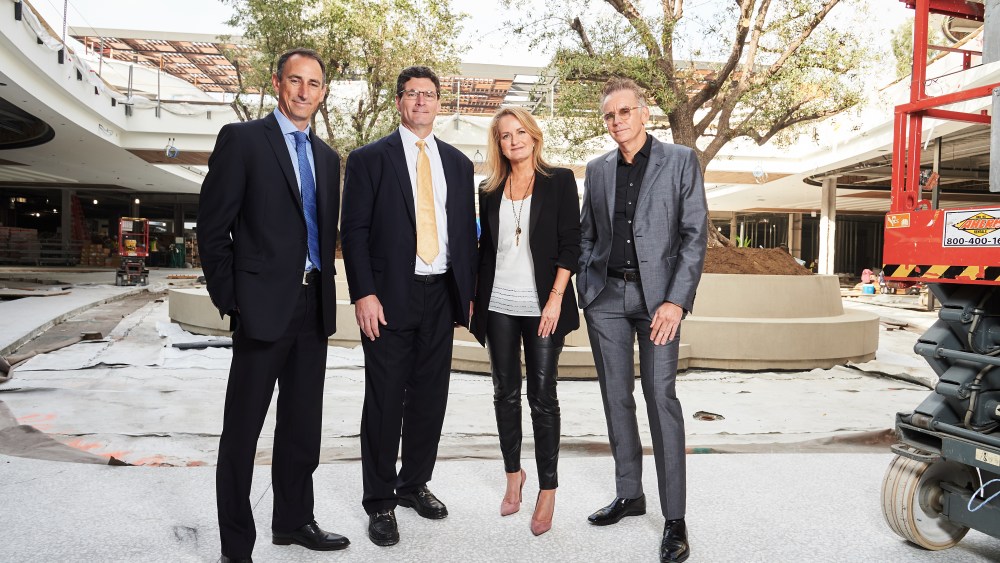 Mall has been a four-letter word for some time now.

Westfield, with headquarters in Los Angeles’ Century Plaza Towers — an office park that’s a self-contained city unto itself — has been shifting to become a high-tech and highly relevant place for the communities it serves, eradicating the same old food courts and chain store staples and replacing them with wellness uses, upscale eateries and apparel brands that are offering flagship outposts or first-to-market offerings. With the wraps recently off on the first phase of the $1 billion Westfield Century City and the completion of Westfield World Trade Center, the developer’s focus is turning to the left coast.

Last week, the company unveiled the first phase at Westfield Century City, which will total 1.3 million square feet upon completion, that includes Kelly Wearstler-designed common areas and 25 retailers, including a new and relocated Macy’s, Aritzia, Bailey 44, Cole Haan, Everything But Water and Ted Baker London.

“[World Trade Center] was a big mission and we’ve moved to the West Coast now that we have three really big projects that we have under construction,” said chief operating officer Bill Hecht from his office in Westfield’s Century City headquarters. “Most organizations tend to do one really big project at a time. That’s not our style.”

The bulk of the Century City stores open with the second phase in August. Come October, Nordstrom will close at the nearby Westside Pavilion and relocate to Century City.

There’s also the $600 million makeover of Westfield UTC in San Diego, set to be completed in the fall, along with the $1.1 billion Westfield Valley Fair revitalization slated for a 2019 completion. Much farther out is the Westfield Promenade in the San Fernando Valley, dubbed the Promenade 2035 plan. The $1.5 billion, 34-acre project includes apartments, live-work studios, offices, retail, two hotels totaling more than 500 rooms and a sporting and entertainment arena.

The California projects are good studies in how the shopping center developer looks at the retail real estate business moving forward, and it’s not about inking deals on autopilot.

“When you break it down by category, there’s just been seismic shifts in the breadth and depth of retailers we work with and the changing of the retail guard,” said executive director of leasing David Ruddick.

Ruddick oversees a leasing team in excess of 40 people that’s charged with keeping their fingers on the pulse of an increasingly fragmented marketplace with consumers groups difficult to define and constantly changing.

“We continue to wear a lot of foot leather out because you’ve got to be out and about,” Ruddick said.

There’s also a careful balancing act that goes into deciding which of the young brands blowing up in the digital age should be brought into a center, even if their popularity on social media would seem to be enough to pull the trigger on a deal.

“When you use the word emerging it’s about really at what point can we connect with the brand because when you’re looking at coming into a flagship location, it’s a big investment by the retailer and it’s at what stage in their lifecycle is that right for them,” Ruddick said. “Now, it’s complemented by the department stores who have been the traditional entry point for a lot of retailers, but that’s the benefit of having department store partners.”

A closer look at how Westfield is merchandising its centers is also an indication of leasing’s evolution, with corporate sponsorships and what prospects the event business hold as a revenue drivers for the mall owner. Last year the company acquired Scott Sanders Productions in an interesting play that now makes Westfield a content creator.

“We need creativity and we want content and we need to be able to create events that are exciting and a reason for people to come into the shopping center and really enjoy a social engagement,” Hecht said. “So that’s a big, big part of the shift that we’re doing as well to appeal to the customer in a much different way and also appeal to our retail partners in a much different way.”

For as much the word partnership has become overused marketing jargon nowadays, having channels such as events and digital creates does indeed alter the way the developer works with tenants.

“We never would have viewed Ford and Chase and Pepsi as being key retail partners,” Hecht said. “Now they are very much so. What we’re able to offer is not just a retail point of distribution. We’re able to offer them a digital footprint with regard to all the digital media we’re putting in as well as an eventing capability.”

Chase, for example, has space at World Trade Center and also Century City in an in-line shop. Ford is another example in New York where the automaker absorbed retail space, took advantage of digital media and event space to introduce new vehicle models and philanthropic initiatives.

“It’s a big initiative for us and it’s opened up customers that we never had in the past,” Hecht said of the infusion of corporate sponsorships, events and digital media.

There’s also the technology component with the sharing of data as malls increasingly become nerve centers for the collection of key shopper information. The developer’s tech arm Westfield Labs earlier this year changed its name to Westfield Retail Solutions and late last year the company deployed Pepper the robot at a couple of its Northern California centers, which Hecht called a good test the company will continue to expand upon.

The technology enabling driverless cars also opens up new possibilities for Westfield by freeing up large swaths of real estate traditionally marked for parking. Westfield is currently building out a residential group, planning ahead for the anticipated changes driverless cars could bear for the productivity of its centers.

The developer will see its first residential project through in La Jolla with a 300-unit luxury tower, which it will start on next year.

The evolution of Westfield’s centers takes it down curious paths involving technology, new real estate asset classes and new types of tenants, but at the end of the day the goal ultimately remains the same: playing the part of community hub.

“The word mall is the traditional descriptive word [for Westfield’s portfolio] but our attitude is really curating a series of city streets,” Ruddick said. “They’re all connected to each other. They’re all highly accessible and highly convenient in a secure environment. That’s the great opportunity for us in relation to how we think about the future.”

For More on Westfield in WWD:

With a Pipeline of Projects, Westfield Corp. Posts Strong Results

Westfield Gets Moving, Brings Workouts to the Mall