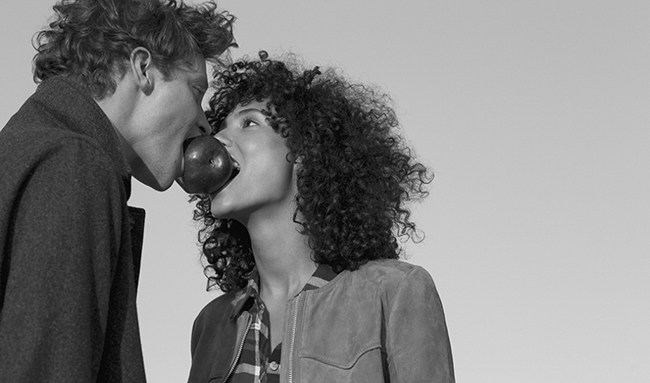 And that’s OK with parent firm Abercrombie & Fitch Co. as it evolves the brand — even though it’s still searching for an identity — to better appeal to the Millennial consumer.

The company on Thursday will start the holiday season with one of the largest ad campaigns in its history. Sans imagery, the campaign starts with the teaser line “People have a lot to say about us. They think they’ve got us figured out.”

Fran Horowitz, the parent company’s president and chief merchandising officer, said, “This is the brand’s opportunity to show the world it is a new day for Abercrombie & Fitch. We’re showcasing new and evolved collections. There are lots of exciting new things to show the world. The brand is approachable, inclusive and fun.”

Essentially, the idea of the new branding is to allow consumers to celebrate their individuality and uniqueness, as opposed to “buying clothes that symbolize membership in an exclusive group,” Horowitz said, referencing the old Abercrombie & Fitch.

The holiday campaign features a part one, the teaser, and a part two, the updated imagery. It was shot by photographers Josh Olins and Matt Jones, and styled by longtime brand partner Deborah Watson. While the teaser part runs for about two to three weeks before the campaign shifts to part two, anyone seeing it can go immediately to the brand’s website or via social media to check out the updated imagery.

The new images aim to capture the inclusive positioning — the marketing reflects ethnic diversity, not just young adults who are white and semi-nude with perfect abs. And yes, with the move away from sexualized marketing, the new advertisement shots show fully clothed models.

The brand’s national marketing campaign includes out-of-home advertising in New York, Los Angeles and Chicago, as well as digital advertising across video streaming web sites, music platforms and social media, with the goal of generating more than 800 million views and impressions. The company said the evolved marketing would continue to develop as the brand looks ahead to its 125th anniversary in 2017.

Horowitz said of the teaser, “We’re hoping people will see that and say, ‘Hmmm…what’s going on at A&F and what do they mean?’”

Ashley Sargent Price, the brand’s first-ever creative director of marketing and the former senior vice president, brand creative, at J. Crew, said, “This is a bold campaign. Rarely do you see this [kind of] campaign that is type only, with no imagery. We want to get people thinking about the perception of the brand….We want to show them a new Abercrombie & Fitch that is a work in progress. And we want to express some of our new ideals. We’ve made a lot of changes and what we believe you’ll find is a brand rooted in heritage, that’s inclusive and optimistic and has a unique point of view on styling and design.”

Price said that as soon as the new campaign launches, the company will reboot all of its social and digital channels, as well as its homepage for a completely new user experience at every level. The brand’s social media followers number 8.9 million on Facebook; 641,000 on Twitter, and 3.1 million on Instagram.

Horowitz said of the aging up of the brand: “We believe our brand is very appropriate for the Millennial consumer. Today the majority of our consumers are over age 20.”

She said the company has done some pressure testing around the world with current and new customers to get a check on what they want. Those test results give us the “confidence to move in this direction,” Horowitz said.

The apparel has also shifted as Abercrombie transitions toward its next chapter, a point the brand is trying to make on its site. “There’s been a lot of progress when it comes to fit and quality. We’re trying to make that very clear on the web site. What you’ll find is that the styling is more personalized, much more lived in and [there is] more detail in the clothes that expresses this idea of personal style. We’re not taking ourselves too seriously,” Price said.

The fall women’s line is the first under the direction of Kristina Szasz, vice president of women’s design. The first men’s component under men’s overseer Aaron Levine has been available since the spring.

But along with change comes some risk. In August, the company reported second-quarter results in which the Abercrombie brand saw a 7 percent decline in comparable-store sales. At the time, Cowen & Co. analyst Oliver Chen noted that brand repositioning at sister brand Hollister is less risky than at older sibling Abercrombie, “where customer acceptance could be a long road.”

The parent company wants A&F to be the American casual luxury brand for the Millennial consumer. The styling has definitely been tweaked and updated — although what the brand stands for is still a question.

Under the reign of former chairman and ceo Mike Jeffries, A&F represented cool and sexy, and for that generation controversy was a big part of its appeal. In 1999, the Michigan Attorney General might not have liked the A&F holiday catalogue — the “Naughty or Nice” magalog contained sexually explicit — but while the blue language had moms and the attorney general seeing red, Wall Street saw green, labeling it a promotional home run. There’s a chance the same can’t be said of the new marketing, at least not right away as consumers likely need time to adapt to the brand’s new messaging. Indeed, the company acknowledged in 2014 that the transition is a multiyear process.

Gabriella Santaniello, founder of fashion and retail research firm A-Line Partners, is concerned about Abercrombie’s targeting of the older end of the twentysomething crowd. “They are skewing older, but they’re not getting the older customer into the stores. They are reaching for the Urban Outfitters customer and in the process have pushed away the true teen customer. It’s a difficult situation,” she said.

Santaniello said the product in the stores “look great. They have updated flannels and the jeans have a good fit. What we’re seeing is also a swing back to logo across the market. Big graphic tees are what A&F was all about, but they are at a crossroads and there’s a question about who are they appealing to.”

She noted that consumers who shop at Urban aren’t likely to think of heading over to Abercrombie to check it out. Those who see good product but can’t figure out a brand identity that they connect with, might think they can get comparable casual product at J. Crew or Gap, although those brands are having their struggles, too.

That’s where some of the risks lie with Abercrombie’s brand transformation. It’s the brand that older twentysomethings have generally left behind, and Santaniello said it would be hard to change their perception. Three years down the road, when the now younger twentysomethings will be three years older, they may want something else — maybe a new brand down the mall corridor that hasn’t been developed yet.

“Now that the company has moved away from logo product, it can’t just switch back to offering logos. A&F as a premier brand had a logo component that was important to help identify and represent the A&F lifestyle. Now, without the logo, the product can be cute, but it can also be just as cute as what you can get at any other retailer,” Santaniello said.

She noted that while the former A&F positioning was considered a teen brand, “it skewed older. It was really for college-aged kids up to the mid-20s.” Santaniello, who hasn’t yet seen the new marketing, said, “The brand has to stand for something. That’s what’s missing.”

She compared it with American Eagle and its lingerie brand Aerie, which in its updated marketing has “pioneered the body positivity movement.”

If the new campaign is Abercrombie’s first evolutionary salvo, then surely the re-branded prototype store slated to be unveiled in early 2017 at the Polaris Fashion Place in Ohio will be an iteration of where the company is headed.

Horowitz declined to discuss the plans for the prototype, noting only that it’s had “significant learnings from [the updated store concept for] Hollister,” and that Abercrombie needs to have “new excitement and be disruptive.”

She said that anyone who hasn’t been in a current Abercrombie store and comes back will have a “different experience,” as the store associates are now “more focused on presentation,” as well as making the customer experience a priority.

Stacia Andersen is the brand president for Abercrombie, overseeing the product line for both genders. Some of the logos that are on select items look different, although Horowitz said the scripted version of A&F Co. is actually the original logo from 1892, noting “it’s a nice way to transition the brand to show something new is happening.” That scripted version is also the “new” redesigned logo for the brand.

Also making a comeback is the moose, a traditional icon that will appear on select products.

“The consumer has evolved, and we’ve listened carefully to the consumer,” Horowitz said.

And while Wall Street may not be on board yet, that too is okay with the company.

According to Horowitz: “What’s important is what the consumer sees and what the consumer tells us. We are in the stores. We see a lot and spend a lot of time talking to consumers. They are telling us we are on target for the age demographic that we are targeting.”