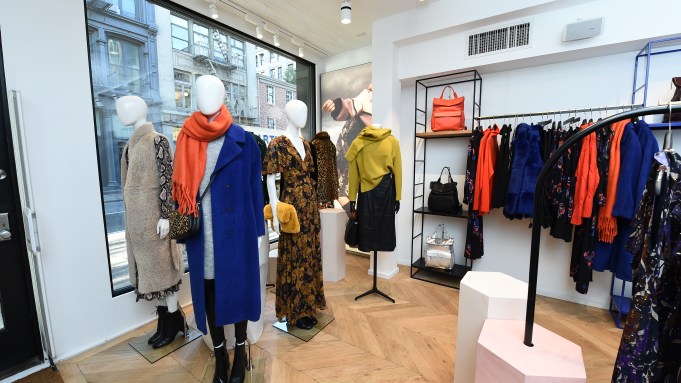 The New York store, which says “Nice to Meet You” in the window, was designed in collaboration with Matter, the London-based art, design and fabrication studio. The space has a gallery-inspired aesthetic, taking influence from sculptural references and using an artisanal approach to create handcrafted fixtures.

“North America is a key market for Whistles and forms a crucial role in our U.S. expansion plans,” said Helen Williamson, Whistle’s brand director. The retailer entered the U.S. market in 2014, and “it’s fantastic we can now offer our full collections in the U.S. for the first time,” she added.

According to Williamson, the merchandise ranges from $32 for socks to $3,600 for a shearling coat. Upon entering the store there are several rails of ready-to-wear, and shelving units one-quarter of the way through house accessories. The bulk of the business is expected to be generated by the ready-to-wear, she said. The store features a large selection of occasion wear, from day to night dressing. Dresses and jumpsuits are major categories, along with printed blouses, coats, biker jackets, shearlings, cashmere crewneck sweaters and T-shirts.

Whistles, which was founded in 1976 by Lucille Lewin, and successfully relaunched in 2008, was acquired in 2016 by TFG Brands in London. Since then, the company has expanded to new locations across the globe, including Hong Kong, Switzerland and the United Arab Emirates. New retail spaces are set to open in the coming year in London Bridge, Australia, the Netherlands and Sweden.

Currently, Whistles operates 48 stand-alone stores, 114 concessions and 14 online channels, including Selfridges and Harvey Nichols in the U.K. and Bloomingdale’s, Nordstrom, de Bijenkorf, PDZ and Brown Thomas internationally. Whistles does business in 18 countries through its own stores, concessions, franchise and wholesale partners.

The retailer expects to get the word out about its New York arrival via press and media outlets, as well as working with influencers. Whistles also plans to throw a party in New York next month.