The retailer recently held its first-ever showing on the West Coast with its fall collection, which presents a more modern look for the brand. 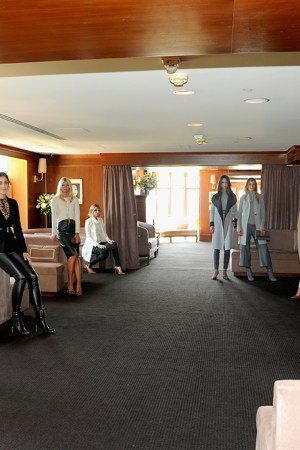 White House|Black Market hopes to ride the wave of buzz around the Los Angeles fashion scene with a reinvention story of its own to tell.

The retailer recently showed off its fall collection on the West Coast — a first for the company — at a Sunset Tower Hotel luncheon cohosted by Louise Roe and attended by guests such as E! News correspondent Catt Sadler and blogger Jacey Duprie of Damsel in Dior.

“It was a really, really lovely way to reintroduce ourselves to that community,” said White House|Black Market brand president Donna Noce. “The West Coast, particularly Southern California, is coming out of a little bit of a lull since 2008 and really emerging again as a symbol of cultural relevance. I think we’re going to see a turn where the West Coast is once again going to have an impact on where fashion goes….It felt like a really relevant time [to show the collection] because we’ve repositioned ourselves.”

The brand’s been retooling for the past 12 months, following a period of growth that led it a bit astray.

Fall takes the White House|Black Market look more modern and contemporary, as Noce described it. The collection is marked by clean lines in the way of a sleeveless trench or sharp trousers with punches of color — a deep blue and forest green in a fringed bag or suede pump — that’s all been dreamed up by the company’s existing design team of 60 workers of which about 20 are designers.

“It’s a big, big evolution from certainly where we were 12 months ago,” Noce said.

Fall not only represents a turn in the look of the retailer’s seasonal offerings, but is symbolic of its desire to be an aspirational brand. The company’s not going after a new customer. She’s still 35 to 55 and White House|Black Market is still affordable luxury.

“Women want to be inspired,” Noce said. “I think we became commercial and we are taking the brand back to what we built our great success in.”

The White House|Black Market division for parent Chico’s FAS Inc. finished the fiscal year ended Jan. 31 with net sales up 3.4 percent from a year earlier to $888.37 million. It accounted for 33.2 percent of the company’s sales, making it the second-largest brand in the portfolio after Chico’s. Comparable sales for the fiscal year were off 1.7 percent compared with flat same-store sales in the year-ago period.

The company in August is set to open a store in Las Vegas that represents a new prototype design Noce described as being “more representative of the future direction of the brand.”

The format is cleaner, residential and employs more neutrals and softer shades of white with “eyeliners of black,” she added. Most of the existing stores’ color palettes could be described as 50-50 black and white in a literal take on the brand’s name.

Much of the rest of the Vegas store’s details are being kept under wraps until closer to the opening.

“We’re keeping it low-key right now, but that [opening] should be a very good moment for us as we continue the building blocks,” Noce said. “This is a very big brand. It’s a very large business. It’s obviously not curtain up, curtain down. It will be a progression of things that will continue to unfold over the next year as we share our repositioning with the world.”