Stefani Greenfield, the founder of Scoop, gazed down streets lined with thriving independent boutiques, coffee shops and restaurants in the Bucktown/Wicker Park neighborhood. 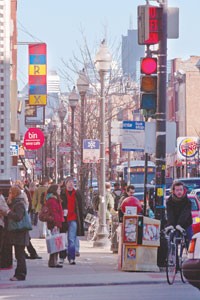 Greenfield, who has built an empire of eight stores in six cities, is doing more than entertaining visions. She picked the eclectic district on Chicago’s Near Northwest Side as the location of Scoop’s first superstore in a 9,800-square-foot former furniture outlet next to a strip mall. The store, featuring a café along with women’s, men’s and children’s designer apparel, is to open today.

“We don’t like to go in the same direction as everyone,” Greenfield said. The neighborhood is “a little groovier, a little more maverick.”

Greenfield isn’t alone in her infatuation with Bucktown/Wicker Park, a 1.5-square-mile district with a reputation as a hip, artsy alternative to staid Michigan Avenue downtown. American Apparel opened along Milwaukee Avenue, which cuts through the heart of the area, more than a year ago. Dutch denim line G-Star unveiled its first Chicago store on the street last year, and Urban Outfitters opened a 10,600-square-foot location on Milwaukee Avenue earlier this month, representing the first chains to venture into the neighborhood.

“It’s got a newness, a hipness and a youth demographic, which is not the case in some of the other areas,” said Keven Wilder, a Chicago retail consultant. “It’s maybe equivalent to the way [Manhattan’s] SoHo used to be. It’s still largely undiscovered. It’s not yesterday’s news.”

The changing climate, however, is not for everyone. The retailers “have to fit the niche,” Wilder said. “It’s a funkier area, which is part of its charm.”

Bucktown/Wicker Park first hit the radar in the Nineties as a hangout for local rockers Liz Phair and Smashing Pump­kins. Some pegged it as the next alternative music mecca. Although that prediction wasn’t fulfilled, the district began to blossom with see-and-be-seen restaurants and bars along Damen Avenue, and women’s retailers. In 1997, trend-setting p.45 opened, the first of about 15 women’s specialty stores on Damen, north of Milwaukee Avenue.

This story first appeared in the March 24, 2006 issue of WWD. Subscribe Today.

The gentrification of Bucktown/Wicker Park hasn’t been universally welcomed either by residents or independent retailers. During the taping of MTV’s “Real World” series here in 2001, there were already protests that the area’s first Star­bucks would dampen the neighborhood’s alternative, independent vibe.

About 52,000 people with a median income of $60,000 live in Bucktown/Wicker Park, which began as a farming community in the mid-1800s, said Paula Barrington, executive director of the local chamber of commerce. It evolved into a residential and manufacturing district settled mostly by German and Polish immigrants.

In the last half-dozen years or so, residential construction has gotten a jump start, and many people have been priced out of the neighborhood. New condos average $420,000; townhouses, $509,000, and single-family homes, $1 million, Barrington said.

Retail space, however, which is most abundant along Milwaukee Avenue, remains affordable compared with some of the city’s most sought-after locations. Many national retailers are first attracted to Michigan Avenue, where rents run $250 to $300 per square foot, said Lorraine Adney, a broker with Baum Realty, who was involved in the Scoop deal. They also consider Lincoln Park’s Armitage Avenue or Halsted Street, where rents average $60 and $70. In Bucktown/Wicker Park, rents have hit $30 to $40 a square foot, a 40 percent increase from less than four years ago, Adney said.

Commercial and residential development aside, Greenfield said the mix of punk postgraduates, artists, advertising execs and latte-sipping urban moms wearing designer denim and pushing Bugaboo strollers is an alluring “creative community…I liked the whole vibe. It was laid-back with an edge. There was such a fashion direction there, but not in your face.”

Noting the shift in Bucktown/Wicker Park, she said: “I see a pretty high growth on Milwaukee,” which still has discount shops mixed with more upscale retail, restaurants and beauty salons. “We definitely see a bit of a changing of the guard. There’s an awful lot of space that has been there a long time.”

Scoop’s launch of its superstore concept is likely to boost the neighborhood’s profile, credibility and desirability.

“It’s all about adjacency,” Wilder said. “Retailers like to be with other retailers.”

After Scoop announced its intentions last summer, there was speculation that Banana Republic, J. Crew and Gap would scout the neighborhood. Again, local independent retailers were concerned.

The neighborhood “is just not that welcoming for that,” said Stephanie Sack, owner of vive la femme, a four-year-old plus-size boutique on Damen Avenue. “This is one of the last bastions untouched by companies of that size, and I’m proud of that. It’s a creative haven for entrepreneurs.”

Sack echoed the views of specialty store owners who want to preserve the existing dynamic.

“There’s a feel of pioneerism, a palpable aura of excitement and what’s new,” she said.

Debbie Sharpe, who has run restaurants and other food businesses in Bucktown/Wicker Park for more than 12 years, said that spirit is part of the attraction.

That edge isn’t without its price. Laura Haberman, who opened her 1,600-square-foot boutique Jade on Milwaukee Avenue last May, said her windows have been tagged so many times she installed anti-graffiti film on the glass.

“It’s an ongoing issue,” she said of the graffiti, which also marred part of her wood storefront with blue paint. “That’s been a nightmare.”

Otherwise, “I’m in love with the location,” said Haberman, who has seen a wine café and tobacco lounge open on either side of her store, which specializes in bohemian designer looks with lines such as M Missoni, Olga Kapustina and Nieves Lavi. “I like the grittiness.”

Although she can’t keep her doors open in the summer — “It’s too loud and there’s too much dirt” — sales are better than expected, with a strong portion of business coming from out-of-towners.

“They’re looking at Wicker Park and Bucktown as a day location,” she said. “All it takes is one time for them to come here and have a good time and then they’ll come back.”

Still, some national retailers remain cautious. “The reaction is 100 percent mixed,” Adney said, when she takes retailers on neighborhood tours.

“Other brands are waking up and taking a look at it,” she said. “But there are retailers who for better or worse think this is the Midwest, and they’re worried about the Midwest. They want to be safe on Michigan Avenue or Oak Street. They want to see the familiar names.”

Chicago’s retail climate is upbeat. “The market here is very, very active,” Adney said. “There definitely is a feeling of optimism….I have retailers looking for space, but we don’t always have it, particularly for smaller retailers.

“Some are bound and determined to be on Michigan Avenue,” she said. “They’ll be sitting and looking for another year before anything opens up.”

That’s fine with Haberman. “Urban Outfitters and Scoop are really as big as we’d want,” she said. “We really don’t want to see Ann Taylor or Banana Republic. We all feel very protective of what we’ve done, and we don’t want to see that undermined.”