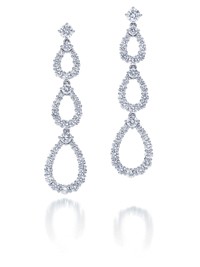 In the next seven years, the jewelry house plans to bring its total doors to about 45, compared with the dozen addresses it now has around the world, chief executive officer Thomas O’Neill said.

The company began revving up its retail presence in January with the opening of a 6,000-square-foot flagship here. A 1,025-square-foot unit in Tokyo opened soon afterward, and on July 4, the jeweler plans to bow its third door this year, a 4,248-square-foot salon spanning seven floors at 171 Bond Street in London. A fourth store might be added to the list, depending on how lease negotiations go for a location in North America or Asia.

“We’ve targeted an annual consolidated growth of plus 20 percent for the foreseeable future, as long as we’re opening these stores,” O’Neill said.

Harry Winston’s sales increased 22 percent for the 12 months ending Jan. 31, contributing to majority owner Aber Diamond Corp.’s 52 percent increase in per share earnings. The Canadian-based Aber’s net earnings in that period were $81.3 million, with earnings per share of $1.40, compared with net earnings of $53.1 million and earnings per share of 92 cents in the prior year. Aber holds a 52.83 percent stake in the jewelry house.

In addition, Harry Winston is boosting its profile among targeted customers. It ranked ahead of a second-place tie by Tiffany & Co. and Cartier, and third-place Mikimoto as the most prestigious jewelry brand, according to a recent survey for the Luxury Brand Status Index conducted by the New York-based Luxury Institute. The study involved 400-plus households with a minimum gross annual household income of $200,000 and $5 million minimum household net worth, including home equity.

“It has been a very successful year,” said O’Neill, who arrived at Harry Winston in April 2004 with the Aber acquisition. “When we took over the business, it was $128 million. We’ll close this year just under $200 million. That’s a very short period of time during which we grew quickly. The biggest challenge is to not become intoxicated by the success, or you can get very sloppy as an organization.”

O’Neill’s team has gone through a transition with the departure in April of James Seuss, whom O’Neill brought on board as president, to join Nike-owned Cole Haan as ceo.

There’s no need to name a replacement, O’Neill said, because of the capabilities of the management tier that had served under Seuss and now report to him.

Vice chairman Peter Schneirla is overseeing private jewelry sales in the U.S. and Asia outside of Japan, as well as directing the New York salon. Hamdi Chatti, president and managing director for Harry Winston Ultimate Timepieces, will be responsible for watches and all wholesale activity of jewelry, including new wholesale market development, and Gilles Haumont, managing director of international sales overseas, is expanding his management responsibilities to the U.S. and Asian retail networks outside of Japan.

“It puts me closer in contact with the day-to-day operations,” O’Neill said.

O’Neill has been hands-on from the start of his tenure two years ago. He and his team soon recognized that invigorating the 100-year-old, New York-based brand would mean overhauling its retail doors.

“We knew we didn’t want to go with standard architects,” he said. “We wanted someone who designs homes or hotels, who has a sense for living space.”

That led O’Neill and creative director Susy Korb to the TriBeCa studio of Thierry Despont, the French-born New York architect whose credits include the public spaces of the Carlyle Hotel in New York and Claridge’s in London, and the decorative art galleries at the Getty Museum in Los Angeles.

“That’s what it feels like here,” O’Neill said about the three-level Beverly Hills flagship, which will serve as a template for new and renovated Harry Winston stores and is an upgrade from the original site across the street in terms of size and impact. “It feels like somebody’s house.”

The reasons for wanting a residential feel are a given, he said.

“It says Winston is a luxury house, and when you come into such a place, you expect the ‘house’ part, along with a richness, which you feel palpably when you walk into the front door,” O’Neill said.

For the Rodeo Drive design, Despont took the original direction of the Fifth Avenue Winston flagship, which resembled a Fifties-era Paris townhouse, and modernized it. The exterior bronze facade suggests ripples of water.

“I had a reaction against those huge glass windows on Rodeo Drive,” Despont said. “I wanted something solid that would draw you inside.”

A blown-crystal chandelier bathes the cylindrical foyer. Here, the newest merchandise is showcased in a circular glass vitrine, and on the walls in boxes framed in wood dipped in 22-karat gold.

The lighting shifts in the next room, a grand salon with a 28-foot-high ceiling.

“Part of retail is theater,” O’Neill said. “The most important part of a theatrical execution is the lighting.”

Yards of thick velvet blanket the walls downstairs, while ultrasuede covers the upstairs.

“I wanted this layering of rich textures,” Despont said.

Chairs are arranged as in a residential salon, and armoires filled with diamond necklaces, bracelets and earrings are opened and closed for clients.

“Jewelry is a sensual experience,” O’Neill said. “Too many of our competitors have created a cold environment. That wouldn’t work for Harry Winston.”

In private rooms on the first and second levels, there are intensely colored, thickly textured paintings by Despont. The company is aiming for at least three new addresses a year, more if the opportunity arises, in accordance with its promise to shareholders.

“The two biggest diamond consumer markets are North America and Japan, so we’re going to concentrate on those,” O’Neill said.

The third store in Japan, which opened in February, is in Tokyo’s Omotesando Hills, following a two-level site in Ginza and another in Osaka.

“Emerging markets such as China, India and Southeast Asia are interesting for us,” he said, adding that entering China will be “sooner rather than later.”

“We could become aggressive on the store openings,” O’Neill said. “We could over-invest. But you invite problems then.”

Those potential problems would be compromising the integrity of the Harry Winston product, he said.

“The other big houses have pretty much advocated expansion to 150, 200 locations. You couldn’t possibly merchandise that many stores the way we merchandise,” he said, pointing out the inevitable constraints in crafting high-caliber jewelry with superior-grade diamonds and other precious gems. “You couldn’t possibly make it a financially viable proposition. But 45 stores is sound.”

Harry Winston also isn’t interested in offering lower-priced fare in the under-$1,000 range, as other luxury houses have done.

One category that received more intense focus in the last year was bridal. With an emphasis on one- to three-karat diamonds at D grade or above, sales of wedding rings have “grown significantly” since 2005, he said, partly because of more offerings in color, size and style.

Existing fashion collections have also expanded, with the in-house design team tapping Harry Winston’s expansive archives, which O’Neill pointed out numbers in the range of 100,000 sketches never before used.

While Harry Winston has traditionally served women, with a smattering of products for men, a fully realized men’s collection will bow this year.

“In the last 20 years, the luxury store has just become a place to buy expensive things,” O’Neill said. “But is it a luxurious experience? To queue up to buy something is not a luxurious experience. To wait more than a few moments at a jewelry counter — this isn’t luxury. You should walk into a store and immediately be served, even if it’s by eye contact.”