As Federated Department Stores nears completion of its purchase of May Co., speculation is that Lord & Taylor's days could be numbered. 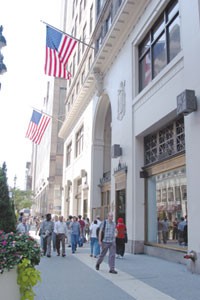 As Federated Department Stores nears completion on its $17 billion purchase of May Department Stores — which is expected to close in the third quarter of the year — speculation is intensifying over which of May’s nameplates Federated will keep and which it will either dispose of or convert to Macy’s or Bloomingdale’s. And at the top of the list is Lord & Taylor.

Terry Lundgren, the chairman and chief executive officer of Federated, has been careful not to tip his hand about plans for the May chains. But he’s repeatedly stated that the company’s objective is to focus its operations on the Macy’s and Bloomingdale’s names. Even as far

tip his hand about plans for the May chains. But he’s repeatedly stated that the company’s objective is to focus its operations on the Macy’s and Bloomingdale’s names. Even as far back as September 2004, prior to the merger announcement, Lundgren said: “Macy’s has been gradually trading up to higher quality products to position ourselves as America’s department store. We think we can accomplish that.”

Deborah Weinswig, a retail analyst at Citibank Smith Barney, who caused a stir on Monday with a research note that placed a $384 million price tag on the Lord & Taylor flagship on Fifth Avenue, said that if Federated wanted to hold on to the chain, the major obstacle would be the government.

“There is no way the FTC [Federal Trade Commission] will allow Federated to keep Macy’s, Bloomingdale’s and Lord & Taylor,” she said in an interview, noting that a ruling is expected in two months. “Federated would become too dominant a presence. From a performance standpoint, L&T doesn’t measure up. The L&T banner is not going to be the one that survives. Marshall Field’s has been chosen as the one to survive.”

L&T units overlap with Bloomingdale’s or Macy’s stores mainly in Southern California, Boston and Manhattan. May has closed 25 of the 32 underperforming L&T units it was planning to darken. The chain now stands at about 54 stores.

A Federated spokeswoman could not be reached for comment.

The argument for selling the L&T flagship is financially compelling. Weinswig, in her research note, said the 611,000-square-foot store could be worth $1,000 a square foot, with air rights selling for $150 per square foot.

“There’s no need for Federated to operate the L&T flagship on Fifth Avenue, which is located directly between the Bloomingdale’s and Macy’s flagships,” said Bill Dreher, a retail analyst at Deutsche Bank. “The location of L&T is not as desirable as the two other locations, which are in marquee shopping neighborhoods. We believe Federated will sell that property.”

Deutsche Bank estimates the building could command between $250 million and $400 million. “The natural operating buyer would be Nordstrom,” Dreher said, “but while Nordstrom would love to get into the Manhattan market, it would be unnecessary for Federated to sell to Nordstrom because there will be so many other possible uses.”

Woody Heller, executive managing director of the capital transactions group at Studley, said the value of the L&T flagship will be hard for Federated to ignore.

“We find ourselves in an unprecedented moment in the marketplace where values for residential space are higher than they’ve ever been or have ever been imagined to potentially be,” he said. “To have a site of that provenance and prominence would afford a developer the opportunity to create something remarkably special, which is in short supply. For a site of that size the list of interested parties would be long and substantive.”

The site would likely be developed into a mixed-use residential tower with a retail component and perhaps some office space.

Lower Fifth Avenue and 34th Street are littered with the ghosts of departed retailers such as Gimbel’s, B. Altman, Orbach’s and Saks 34th, most of which have been converted into just those kinds of mixed-use buildings.

“There’s the issue of a department store being able to operate there profitably again,” said Gene Spiegelman, senior director, retail services, Cushman & Wakefield, referring to L&T’s 424 Fifth Avenue address. “It’s a total development site now. It will be a mixed-use tower with a retail base.”

Executives at May Department Stores could not be reached for comment.

Not surprisingly, Vornado’s name was mentioned along with other potential buyers. The company has built its fortune by redeveloping the properties of distressed retailers such as Alexander’s and recently partnered with Bain Capital to buy Toys ‘R’ Us. Another company with a similar modus operandi is Cerberus Capital Management, which purchased Mervyn’s.

On lower Fifth Avenue, small buildings are being torn down to make way for luxury high-rises that will redefine the neighborhood. In fact, directly across the street from the L&T flagship at 425 Fifth Avenue, is a 54-story apartment tower designed by Michael Graves. That led Arnold Aronson, managing director of retail services at Kurt Salmon Associates, to wonder if a store is worth more for its real estate or as a producing retail unit.

“Using the benchmarks of New York’s flagship stores like Bloomingdale’s, Saks and Bergdorf Goodman, L&T in its current location is a substantially lower performer than the others,” he concluded.

Apart from the flagship, Lord & Taylor’s performance has been improving, according to retail sources. The chain has sharpened its focus and upgraded its assortments with ceo Jane Elfers at its helm. In January, Weinswig noted, “Lord & Taylor has spent the last 18 months changing 60 percent of its merchandise and has been driving positive same-store sales, though the May corporation as a whole has been running in the negatives.”

But if the future of L&T remains up in the air, industry experts believe that another May nameplate — Marshall Field’s — seems to have more going for it, although Lundgren has made no public promises to the chain. In the Midwest, where Federated could use a high-end venue to complement Macy’s in certain malls, Marshall Field’s, which was cited as a strong brand with cachet, could be expanded. There remains the question of Field’s flagship on State Street in Chicago, though, which local residents are banding together in an attempt to save. May operates 62 Marshall Field’s units.

“Marshall Field’s has a tremendous following,” said Deutsche Bank’s Dreher. “I wouldn’t expect Federated to move away from that name but rather expand it in the Midwest.”

Dreher believes Federated will jettison between 30 and 75 stores throughout the May chain, depending on overlap. Other May nameplates include Famous-Barr, L.S. Ayres, The Jones Store, Filene’s, Kaufmann’s, Foley’s, Hecht’s, Strawbridge’s, Robinsons-May and Meier & Frank.

If that happens, there will be buyers waiting in the wings. Nordstrom may want to pick up some L&T locations in “A” malls but it’s unlikely Federated would allow such a strong competitor on its turf. Federated might be willing to sell to J.C. Penney, which has a more moderate customer than either Macy’s and Bloomingdale’s.

Target is another possibility. The mass merchant’s return on investment capital is highest in its mall locations, and Target — which ironically used to own Marshall Field’s before selling it to May — is seeking more real estate in shopping centers. The design-conscious chain draws shoppers from a variety of economic backgrounds. Target has quietly opened 100 mall stores and plans to open more.

Of course, if Federated chooses to sell the L&T division, it may find a buyer that wants to operate the chain.

“There’s enough critical mass in the L&T business,” said Kurt Salmon’s Aronson. “L&T does the same volume as Saks’ northern division and it’s only one nameplate. A number of private equity companies have been actively looking for opportunities in retailing. If there’s interest in Saks’ northern division, there could be interest in L&T from private equity groups or strategic investors.”

But Frederick Schmitt, a vice president at the investment banking firm Sage Group, believes L&T is an asset Federated should hold on to. “I think it’s a nice brand that Federated would be well served to keep,” he explained, adding that, if it doesn’t, he’d like to see another department store chain buy it that would be more likely to continue to operate it as L&T. “There’s some name recognition.”