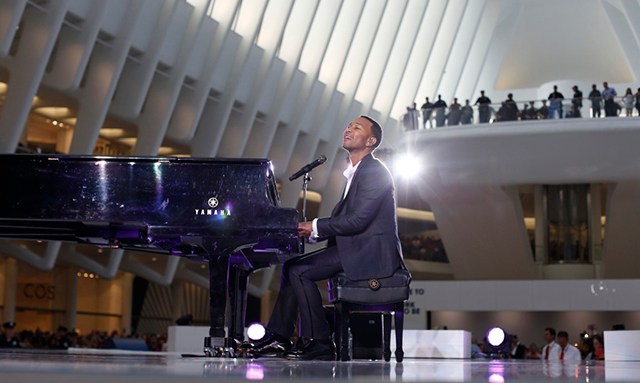 There was entertainment, partying and big crowds day into evening — all the fanfare that makes for a launch of major urban development. Yet Tuesday’s opening of the 350,000-square-foot Westfield World Trade Center transcended the traditional ribbon cutting as it became a tribute to the many impacted by the 9/11 terrorist attacks on the site and to the resilience of New York City.

“The World Trade Center is a symbol of hope, opportunity, progress and perseverance,” said William Hecht, Westfield’s chief operating officer in the U.S., at the morning ceremony. “Westfield is profoundly proud to be a part of this project and to introduce new experiences and energy to lower Manhattan.”

The festivities kicked off with a color guard and flag ceremony and continued with performances for the public, as well as special “family day” activities for many of those affected by the events of 9/11, all in collaboration with the Port Authority of New York & New Jersey, the 9/11 Tribute Center, Heart 9/11 and the National September 11 Memorial & Museum. Musical sets featured Leslie Odom Jr., who plays Aaron Burr in the musical “Hamilton”; Jordan Smith, a winner of The Voice; violinist Dr. Draw, and the Harlem Gospel Choir.

Around 6 p.m., there was a surprise performance by John Legend in the center of the huge Oculus, the property’s soaring light-filled centerpiece, designed by Santiago Calatrava. It’s both a retail, food and restaurant complex and a commuter hub, providing connections to 13 subway lines and Path trains as well as ferries. Of the 120 stores on the site, ranging from Aldo to Apple and H&M to John Varvatos, about 60 opened for business Tuesday.

“We are excited to celebrate this rebuilding right here, this new structure, and to celebrate the spirit of this country,” said Legend, who performed for about 45 minutes, and treated the thousands watching to several of his hits such as “Safe Room,” “Green Light” and “All of Me.”

“Did you know he was the prom king in high school?” asked Gayle King, who introduced Legend to the crowd. “And he eats rotisserie chicken before his shows….Music and education are his passions, and, oh, what a voice. He once told me that writing love songs comes easily to him.”

Among those in the VIP section was Congressman Charles Rangel and his wife Alma. “To see this emerge, to see what has come out of such a tragedy, it just defies the imagination,” Rangel told WWD.

Rangel and the other VIPs then rode the escalators up to the new Eataly, directed by scores of Westfield workers holding their signs up high.

“I just feel great,” said Peter Lowy, Westfield’s co-chief executive officer. “It took a lot of hard work to get here, but here we are 15 years later. This project defies human scale.” Lowy said Westfield intends to continue offering performances in the Oculus. “We can have these public events and they don’t impede the commuter traffic.”

Fabrizio Germano, general manager of the downtown Eataly, compared Manhattan’s two Eataly locations. “Here we have something different and something similar to our big brother on Fifth Avenue,” Germano said. “The theme here is bread — meaning we break the bread together.” It was important, he explained, to convey the spirit of unity and coming together on the rebuilt World Trade Center. The Eataly has its own bakery, a juice bar, a flatbread station, and “We’re very strategic,” noted Germano, catering to the office crowd by offering breakfast.

“I lived in lower Manhattan on Thomas and West Broadway for many years,” said Angela Ahrendts, retail chief for Apple, which has a two-level store in Westfield World Trade Center. The Oculus, she said, has “very special meaning. I would never think of it as a mall. I call it an amazing gift to the world. It’s an art installation for the whole world to come and see.”