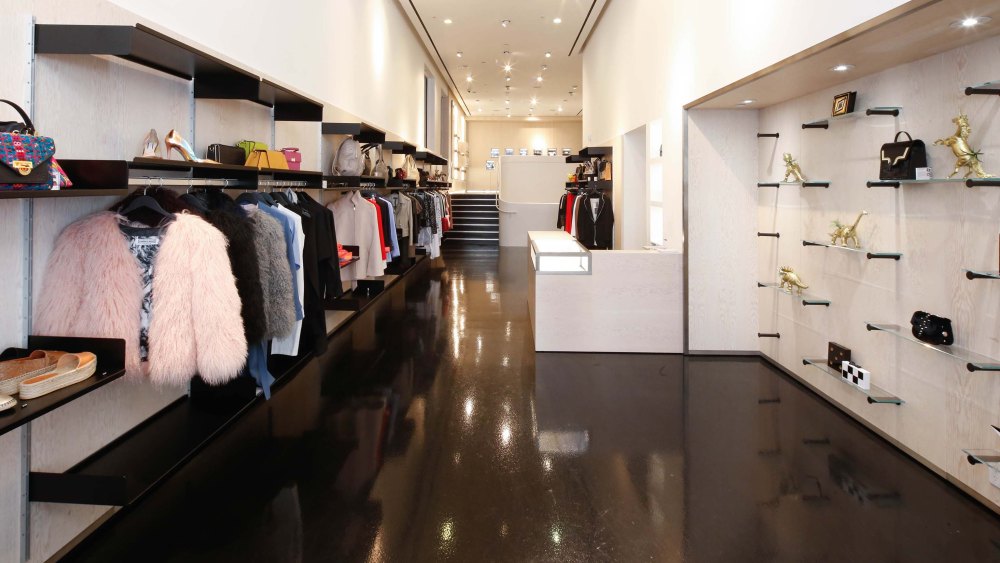 Could concessions be the wave of the future?

Wolf & Badger, the U.K.-based multichannel retailer, is bringing its concession business model to the U.S., where it has opened its first outpost at 95 Grand Street in New York. The 2,500-square-foot, multilevel and multipurpose space is located near retailers such as Alexander Wang, Acne, Dior and Saint Laurent.

Wolf & Badger, which has two stores in London, introduces consumers to emerging brands on a three-month rotating basis. The company doesn’t buy on a traditional wholesale model but takes a commission of anything it sells either on the online platform or at the store. Brands pay a small monthly membership fee to be part of Wolf & Badger, which goes toward marketing the brands. Wolf & Badger pays the store’s rent and hires the staff.

Founded in 2010 by brothers George and Henry Graham, Wolf & Badger’s three stores and online operation offer a curated roster of more than 700 emerging brands from around the world. Among the offerings in the New York store are women’s wear designers such as Hebe Studio, My Pair of Jeans, Florence Bridge, ElleSD and Parlor; handbag lines such as Cafune, Ohktein and Scalo;  footwear such as Lucy Choi (Jimmy Choo’s niece); jewelry designers such as Alexa K, Kasane,  Talia Naomi, Bonheur Jewelry and Nan Fusco; men’s wear such as Rubirosa; and homeware such as O.W. London.

“We look to work with incredible up-and-coming talent who are at this stage of their life cycle that they’re focused on design and manufacture of their collections, and rightly so, but lack a reach to consumers that they deserve,” said George Graham, cofounder and chief executive officer,  who was interviewed with his brother at the SoHo store.

Comparing Wolf & Badger to the way concessions operate at department stores, he said, “We call it a service retail model.”

In explaining the fee schedule, Graham said,“Each brand contributes $500 to $1,200 per month towards marketing and in return for all other services provided, including unlimited use of the store for events and for their showcase in a fully staffed store in SoHo.  We then charge 20 percent on sales generated on their behalf in-store or online, rather than the typical 60 percent to 70 percent on a standard wholesale arrangement.”

Graham said the store doesn’t insist on exclusivity. “We like to see our brands develop and grow within the Wolf & Badger platform. We’ve had many who have gone on to open their own flagships, and be in fashion weeks and pick up stockists around the world, and for us, it’s great to see,” he said.

Up until now, the London stores and the web site have been focused on U.K. and European brands. “Now we’re expanding into the U.S. market; we’re working with incredible talent coming out of the U.S.,” he said.

The store rotates 20 to 25 percent of the merchandise every three months. Brands stay on the online platform for a longer period. In order to familiarize the customer with the designers, Wolf & Badger hosts “Meet the Maker” events two to three times a week, where it invites the designer to meet and get to know the customers and vice versa.

Robert Burke, ceo of consultants Robert Burke Associates, sees the potential of the concession model for the U.S. “I think it’s a unique model. I think it provides an opportunity for brands that may not have the reach of their own online sites, or be able to afford having a retail concept to have this type of exposure. I think it certainly serves a lot of the needs that the brands have, but also provides the customer with a highly curated shopping experience and the fact that it rotates regularly. I think one of their biggest draws is their web site.”

The biggest risk for a brand is if it puts in a lot of stock that then doesn’t sell and then the firm doesn’t get money up front, he said. “It’s a matter of timing, but interesting. I think it could catch on. Everyone’s looking for interesting shopping experiences,” said Burke.

Marigay McKee, founder and ceo of MM Luxe Consulting, said, “The concept of Wolf & Badger in SoHo is interesting as it brings together an eclectic mix of talent and design from niche and up-and-coming brands (many English names too) in a lifestyle format that, without the master umbrella that Wolf & Badger creates, for young brands, these couldn’t afford to retail their lines in the U.S. under normal brick-and-mortar scenarios. There is also the feeling of discovery when a consumer enters the store as they want to be surprised and find newness and niche brands they may not have been acquainted with previously. The model is certainly working as a mixed-use concession for new brands.”

She said the multibrand arena is thriving with new concept stores like The Webster, The Line and Forty Five Ten “appealing to the lifestyle-edit concept consumers seek out, and focused around the theater, hospitality and experiential aspects as well as the curation of product and merchandising.”

In the beauty area, she pointed out that it’s evident at stores like Bluemercury, Cos Bar, Blushington and Violet Grey. “Multibrand mix stores each have a point of view that gives a personalized approach and edit to the subject of beauty and the Millennial consumer who values the experiential as well as the digital associations,” said McKee.

“The combination of digital and experiential is the recipe for success for a lot of these lifestyle-concept stores as everyone attempts to design the store of the future. The alignment of digital content, merchandising content in-store and commerce creates value and information for the consumer too,” she said.

The SoHo store was designed by Augustus Brown, a Royal College of Art graduate architect, who also designed the London boutiques. The main level features women’s wear and accessories,  the lower level houses men’s wear and homeware, and the upper floor is dedicated to key designer jewelry collections. Sixty to 70 percent of the merchandise mix is women’s apparel and accessories; 20 to 25 percent is men’s wear, and the rest is home.

The way they discover new brands “is organic,” said Henry Graham, cofounder and creative director. “We have a good reputation among the designers we work with. Most of the brands are coming through recommendations or through other designers we stock or reading about us in the press. We’re always on the lookout for new brands.”

Asked if the store ever gets pushback from an emerging designer who doesn’t want to pay a fee and prefers that the collection be purchased, Henry Graham said, “Of course. But more regularly, we get brands who want to work with us, and we say, ‘We’re not prepared to work with you. You’re not the right fit.’ We turn away 90 percent of the people who want to work with us. We get about 200 to 300 applications a month.”

George Graham said they are looking at retail opportunities in Miami and Los Angeles, where they have an existing customer base. Ninety percent of the company’s business is done online. They carry 20,000 stockkeeping units on the site.

Wolf & Badger launched in 2010 with an online operation and a store in Notting Hill in London. It opened a second store on Dover Street in London in 2012.  “We saw a gap in the market where brands didn’t have the exposure to customers they deserved. They could sit around waiting for a department store to come find them, which wouldn’t really happen without sales metrics or without a track record, or they could go to a street market. That wasn’t appropriate for the premium labels we work with,” said George Graham.

The company employs 15 people in London and New York working on digital marketing for all the designers. To drum up exposure, Wolf & Badger does public relations and product placement, plans to host offline events, and is active across such social media channels as Facebook, ShopStyle, Polyvore, Instagram and Google. It has also developed a lot of relationships with bloggers.

“We have a big flow of customers who are interested in independent brands, and use that data we built to introduce the right customers to the right brands,” said Henry Graham. “That allows us to market these smaller designers that independently they’re unable to because we have a collection of so many brands and have so much traffic. It allows these smaller brands to compete on a level playing field.”

Under this model, participating designers have access to such business services as creative and merchandising consultancy, retail advice, press and marketing support for short- and long-term success.

As for why they decided to expand to SoHo, George Graham said, “We were looking for two years for the right space in New York. We spent a lot of time out here getting to know the city and the different neighborhoods. We felt that SoHo had the right adjacencies and right customer base for the designers we carry.”

“It’s the best place for our brand. We’re hoping it will be as good or better than London. It’s always been a dream for us to be here,” he added, declining to disclose first-year volume projections for the SoHo boutique.