ORLANDO, Fla. — Despite flat sales for the overall sporting goods industry in 2003, sports retailers and manufacturers are pumping up their offerings of women’s apparel, which has lately been a star performer in this arena. 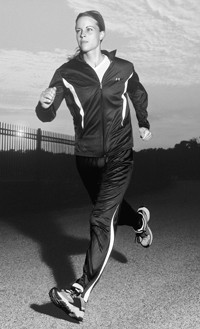 ORLANDO, Fla. — Despite flat sales for the overall sporting goods industry in 2003, sports retailers and manufacturers are pumping up their offerings of women’s apparel, which has lately been a star performer in this arena.

That was a clear theme at Super Show, which ended its three-day run on Wednesday. The show drew about 63,000 buyers, an 8 percent increase over last year, according to officials of the Sporting Goods Manufacturers Association, the Miami-based show sponsor. Billed as the world’s largest sports industry trade show, the Super Show made its debut at Orlando’s Orange County Convention Center, after a three-year stint in Las Vegas.

Sales in the sports industry have declined during the past decade, due to several factors, from waning demand for athletic shoes to new technology and entertainment options that compete with sports for more of the consumer’s leisure time and dollars. Wholesale apparel sales, the largest segment at 45 percent of total sales, declined 3.7 percent, while footwear rose 4.5 percent, and sports equipment gained 1 percent, according to information presented at Financial Day, a pre-Super Show kickoff event held Sunday.

At Financial Day, John Riddle, president and chief executive officer of the SGMA, projected flat sales for sports apparel in 2004, but a slight improvement in unit sales over 2003. Consolidation at retail and manufacturing, excess capacity and price declines have all taken a toll, he said.

Hot sports for 2004 include soccer, basketball and exercise fitness, with female participation continuing to grow. Sports licensed product, so big a decade ago, is hot again, with improved distribution and retailer relationships.

Apparel continues in a strongly female-specific direction, compared with the unisex or scaled-down men’s wear-related products of the past, with body-conscious silhouettes and features and details designed for women’s needs.

Activewear and sports apparel continue to reflect ready-to-wear trends, in lingerie-style sports bras, low-waisted and cropped pants and “Flashdance”-inspired off-the-shoulder tops and legwarmers. Fall colors were generally bright, with a few neons for the younger set, and more muted tones, inspired by the interest in yoga and spawear. As in rtw, texture is key, as mixed fabrics contrast matte and shiny finishes.

Licensed product is seeing a resurgence, especially in women’s areas. No longer a sized-down version of men’s apparel, women’s product, such as NBA4Her, a women’s line of apparel launched in March 2003 under license, includes body-conscious styling, such as dresses, loungewear and swimwear, which will be introduced in February.

“Licensed product is in a rebuilding mode,” said Kim McBride, senior director of marketing retail development for NBA Entertainment, which oversees the licensing deals. “Rather than saturated product, we’re doing retailer exclusives, with more variety and special makeups that retailers are demanding.”

Despite consolidation and attrition of independent stores, large sporting goods chains were bullish at the show, boasting of improved management techniques, cost cutting and globalization that are leading to big expansion plans. Show officials said big-box, full-line sporting goods stores sales were up 18 percent, with big-box outdoor specialty stores up 41 percent between 2002 and 2004. Targeting women with core athletic apparel and fashion-driven product is a major focus in retailers’ growth plans.

One of the largest, The Sports Authority, plans to add 18 stores in 2004, said Doug Morton, the chain’s ceo, who spoke at Financial Day. Having bought Gart Sports, based in Englewood, Colo., in August, the chain now has 387 stores in 45 states, and projects $2.6 billion in sales for 2004. In addition, about 135 stores will be remodeled in the next few years.

“Apparel is our biggest opportunity, with strong numbers across the board,” said Morton, who added that apparel areas would be remodeled in 200 stores, with softer, movable fixtures.

The company also plans to grow winter sports and outdoor categories, leveraging Gart’s expertise in those areas and adding in-store concept shops with The North Face and Columbia in 55 Northeast stores. While brands such as Everlast, Reebok, Columbia and The North Face will be strong going forward, private label, which offers better margins, will grow to 11 percent.

“We’re expanding women’s areas, and will invest heavily,” he said. “We focus on core athleticwear rather than the latest fashion trend. We’re concerned about colors, not high-risk fashion.”

Women’s golf, running and yogawear have been strong, with Nike and Adidas as key brands. Twelve buyers attended the Super Show looking to build apparel.

The company is looking to build private label from 9 percent of total apparel sales to 15 percent in the next three years. At price points just below premium brands, product will include performance features to help keep prices and margins high. Growing private label has helped increase inventory turns to make Dick’s one of the most profitable retailers in the industry, said Stack. With $1.3 billion in revenue in 2002, profits were $38 million.

“Consumers are buying closer to need, with sales up right before Christmas and after into January,” he said. Apparel sales have been “strong, not fantastic, but good,” he added. Private label programs, begun in 2000, will expand, and the company will grow licensed product offerings this year. The company’s biggest expansion opportunity is in Europe. With 427 stores in 12 European markets, the company will launch new stores in Ireland, Hungary and Czechoslovakia in 2004.

In the U.S., around 80 stores, mostly in urban markets, will adapt a more European-inspired prototype, with trendier, more fashion-forward merchandise. Exemplifying the trend is a new 2,500-square-foot store recently opened in New York’s SoHo neighborhood.