Frank Tell and Gemma Kahng are among the American designers selling their wares through the new e-commerce site. 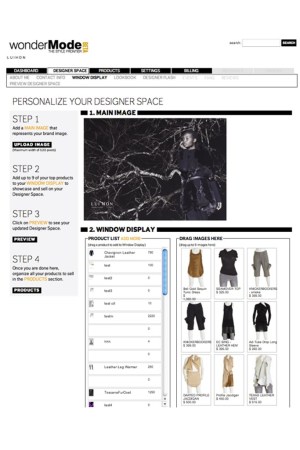 NEW YORK — With products from 90 brands and distribution in 13 countries, the e-commerce site WonderMode aims to cater to designers as much as consumers.

With $100,000 from family, friends, an angel investor and his own bank account, Aaron Duncan started the company several months ago with an emphasis on women’s contemporary sportswear and accessories, although it also carries men’s wear. Formerly senior vice president and creative director for global licensing at Playboy, where he helped build its licensed consumer products business to nearly $1 billion, Duncan is once again focusing on fashion with the aim of giving little-known designers a chance to sell their products to a wider audience.

Earlier in his career while working at Saks Fifth Avenue as an assistant buyer, he took night classes at the Fashion Institute of Technology to learn more about fabrics that were used in the chain’s private label program. Duncan eventually went back to school full-time and later designed denim and chinos for J. Crew. After that, it was off to Hong Kong to work for G2000. “I understand a lot of the frustrations that designers face,” said Duncan, noting that photo shoots, art direction and other branding options are available to the designers featured on WonderMode.

He came up with the idea after a few designer friends were discussing the challenges of opening retail accounts. Some of the WonderMode designers sell to Harvey Nichols and other major retailers, but they are eager to have a wider international presence, Duncan said.

Every designer must be approved through an application process, and once approved, they each get their own URL. Frank Tell and Gemma Kahng are among the American designers selling their wares through the site. Kahng developed a secondary label, Gemma by Gemma, specifically for WonderMode. Once approved, designers have the option of renting space to be featured more prominently in the item of the week section. “Eventually, we would like to be like a department store where every designer has a special space,” Duncan said.

His goal is to have “several thousand” designers featured on the site, and to be profitable by the end of 2013. Currently, 30 percent of WonderMode’s traffic is generated from Asia, he said. While online shoppers will find items from $100 to $1,000, the average purchase is $400. Designers earn 80 percent of each sale, with WonderMode taking the other 20 percent.

Duncan said some of the skills he picked up during his 10-year run at Playboy have carried over to this new venture. “I understand licensing and branding. Starting out, you have to control your brand,” he said.

The company is playing up what it calls the three Cs — commerce, content and connectivity. “There is definitely a lot of competition out there in this space. Our goal is to help designers sell product and build their brands,” Duncan said. “We would like to be a large player, not just a niche one.”