Woolrich at 175: A Special Report

Like its Pennsylvania tuxedo — a black-and-red plaid hunting jacket that deer hunters wore with coordinating britches — Woolrich always has aimed to be purposeful in its 175-year history.

At first glance, the ensemble looks... 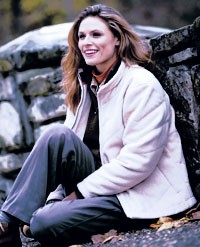 Like its Pennsylvania tuxedo — a black-and-red plaid hunting jacket that deer hunters wore with coordinating britches — Woolrich always has aimed to be purposeful in its 175-year history.

At first glance, the ensemble looks outdoorsy enough, but a closer look reveals an overextended collar that covers the neck, throat and mouth for added warmth and protection. The point being that everything the company designs is meant to have a functional end use. Practicality is nothing new for Woolrich.

In 1830, John Rich, the company’s founder, trekked to logging camps selling fabric, socks, coverlets and yarn from a mule cart, and 15 years later opened a mill in what is now Woolrich, Pa. From producing blankets for Army troops during the Civil War to suiting up Admiral Byrd for three Antarctic expeditions, Woolrich has long been enterprising in its pursuits. In 1975, the company unveiled its Arctic Parka for workers on the Alaskan pipeline.

“The company was and still is conservative. Then and now, we have always concentrated on functional product, and we are very employee-oriented,” Brayton said. “The company has always thought in terms of long-term growth with security for our employees. Sustaining growth on a long-term basis has always been more important to us than fast-turn growth.”

Some might argue that the brand’s basic styles and silhouettes don’t lend themselves to trend-chasing. But Brayton insists the company has been on the move to position itself as a lifestyle marketing brand instead of a manufacturer. How that translates to outsiders can be seen in Woolrich’s:

With aging Baby Boomers leading the charge into the great outdoors and often taking their families with them, brands such as L.L. Bean, REI and Eddie Bauer are trying to keep them covered with a sundry of apparel, accessories and gear. While Brayton steps back from saying the company was smart enough to plan for the outdoor boom, he does allow: “The fact is, we have made clothing for the outdoors for 70 years. All of a sudden, we see that continuing. We’re doing tremendous business in Italy, Germany and Japan.”

Late last year, Woolrich opened a freestanding store in Paris. It also has stores in Cortina and Courmayeur, Italy, and is considering opening one in New York in the next three to five years. The U.S. remains the brand’s most important market, but Europe is picking up steam. Worldwide, Woolrich posts annual sales of $300 million, including retail sales in its three freestanding stores and 16 outlet stores. Apparel accounts for 60 percent of the total business, with home products such as blankets and furniture comprising the remaining 40 percent. Most of the brand’s 2,500 accounts buy women’s and men’s apparel.

Vice president of sales Jerry Rinder, who joined the company two years ago, said, “My job is not to relaunch the business but to dust off the brand to bring it back to its rightful place in the outdoor industry.”

Outerwear is the greatest growth opportunity for the brand, and maintaining quality at a price will be instrumental to accomplishing that, Rinder said. The core of the women’s collection wholesales from $25 to $100. “We just can’t put a $500 piece of outerwear out there and expect it will sell. Conversely, we can’t put out a $79 stripped-down jacket and expect it to sell.”

To encourage more multi-item sales, outerwear is now better coordinated with the brand’s sportswear and accessories. Licensees visit the corporate headquarters once a season to ensure all colors and design direction are aligned. Designs are more passive than active, but they are functional, Rinder said.

Lederle Eberhardt, vice president of merchandising and design, said the company introduced petite sizes for fall 2005 and has extended its regular sizing to XXL — comparable to a size 18-20. Woolrich plans to roll out plus sizing at retail for fall 2006.

“Newness is a must at this point because private label is our biggest competition. If we have a style in the line for more than two seasons, it winds up in someone else’s private label [program],”  Eberhardt said.

Competitive as the brand may be, Woolrich tries to keep itself in tack.

“We don’t want to overreact and to have to back up,” Brayton said. “It would be easy for us to get into new distribution channels, but then we could make a mistake and not have the clean distribution we prefer.”

The company has faced some speed bumps along the way. In the late Eighties, the brand’s chamois shirts were staples worn by East Coast college students, and the company had 10 factories in the U.S. At that time, Woolrich had 3,500 employees churning out its branded merchandise as well as its private label apparel for L.L. Bean and Lands’ End. When those two companies went offshore for manufacturing, they took 25 percent of Woolrich’s apparel business with them.

Brayton admits the company “maybe made a mistake” by going global later than its competitors. But its resistance was rooted in good intentions. Having employed generations of families in its factories, the idea of abandoning those facilities and leaving its workers without a paycheck was not something Woolrich executives took lightly. Eventually, management realized “it was impossible for us to remain” entirely in the States.

While Woolrich has shifted some production overseas, it still has three factories and distribution centers within a 25 mile radius of its headquarters, which has a woolen mill on its property that still runs today. Through a government contract, Woolrich makes blankets for the U.S. military. It also produces the wool that is used for the Navy’s peacoats.

This fall, Swiss-made watches and children’s wear will be introduced at retail through licensing deals with UVM and Hathaway, respectively. While there are no plans to start selling Woolrich bicycles in the U.S., they are sold in Japan. The company is, however, considering selling camping equipment, which is already sold in Japan. In addition, luggage, backpacks and duffel bags may be licensed in the next year in the U.S., Rinder said.

Woolrich has 600 employees in the U.S., including 30 who were hired in the past three months. The bulk of those new recruits focus on the brand’s new bottled water, which launched in mid-Atlantic grocery stores last week. Woolrich water comes from eight natural springs on its property and is processed in what used to be one of its apparel warehouses.

The brand’s resourcefulness is as much a sign of the times as it is a reflection of its heritage. Bottled water, after all, is the second most popular beverage in the U.S. and nearly a $9 billion business. Brayton expects water sales to account for three percent of the brand’s total volume in the next year.

This pursuit is not something that would be lost on the company’s founder. “They used to come to the office for a few hours and then farm land in the afternoons. They were open-minded and their plans were thought out — not concentrated in one area,” Brayton said. “The wool mill, the blankets, apparel and furniture are all related to the outdoors. Our founding members would be pleased with the direction we have taken.”