What of Renting, Consigning and Reselling Clothing During Quarantine?

WFH? Resale marketplaces try virtual consignment, as rental services aim to adjust their offerings for customers with nowhere to go. Analysts weigh in.

As with retail, rental and resale businesses feel near-term impact of coronavirus as homebound workers opt for online and what's already in their closets. Which is more likely sweatpants.

As retailers shutter their doors and luxury groups even switch production to hand sanitizer in the war on coronavirus, secondhand shoppers are second-guessing reselling, consigning and renting clothes — among everything else — as they self-quarantine themselves during the pandemic.

This includes opting out of touchy-feely luxury consignment appointments and pausing or canceling memberships to their unlimited wardrobes via Rent the Runway, as their social calendars begin to dry up and sanctioned workdays on the couch allow sweatpants as the norm, at least for several weeks.

Last week, a customer posed the question looming on the minds of the VIP consigner set on The RealReal’s web site: “Is it safe to have The RealReal’s White Glove team come to my home for consignment appointment?”

The Center for Disease Control and Prevention defines close contact for the spreading of coronavirus as within six feet, which compromises high-touch consignment consultations.

Regardless, a lot has unfolded since the inquiry.

In its latest response on Tuesday, The RealReal withdrew its outlook for the first quarter and full-year 2020 due to the impact of COVID-19, as the Bay Area begins its aggressive shelter-in-place order, affecting Alameda, San Mateo, Contra Costa, Marin, San Francisco and Santa Clara counties, for the next three weeks.

Because of “shelter-in-place” rules in San Mateo County, the Brisbane, Calif. e-commerce center was also shut down (its New Jersey facility will pick up the slack), to extend till April 7 at present.

In a Cowen report on the company last year, the White Glove services accounted for 67 percent of GMV, and goods typically move fast, with 60 percent of luxury items sold within 30 days.

Bringing more buyers into the consignment fold to keep the flywheel effect as “fluid” as the expectation of change is crucial for business.

And email is the direct line to the goods. Appropriately, WWD received an introductory email about beginning the consignment process the morning of the new policy announcement.

“In the near-term companies like The RealReal should see a short-term benefit with people working from home and unable to go to stores,” said Chris Ventry, vice president in the consumer and retail practice of SSA & Company, a global management consultant focused on strategy execution. 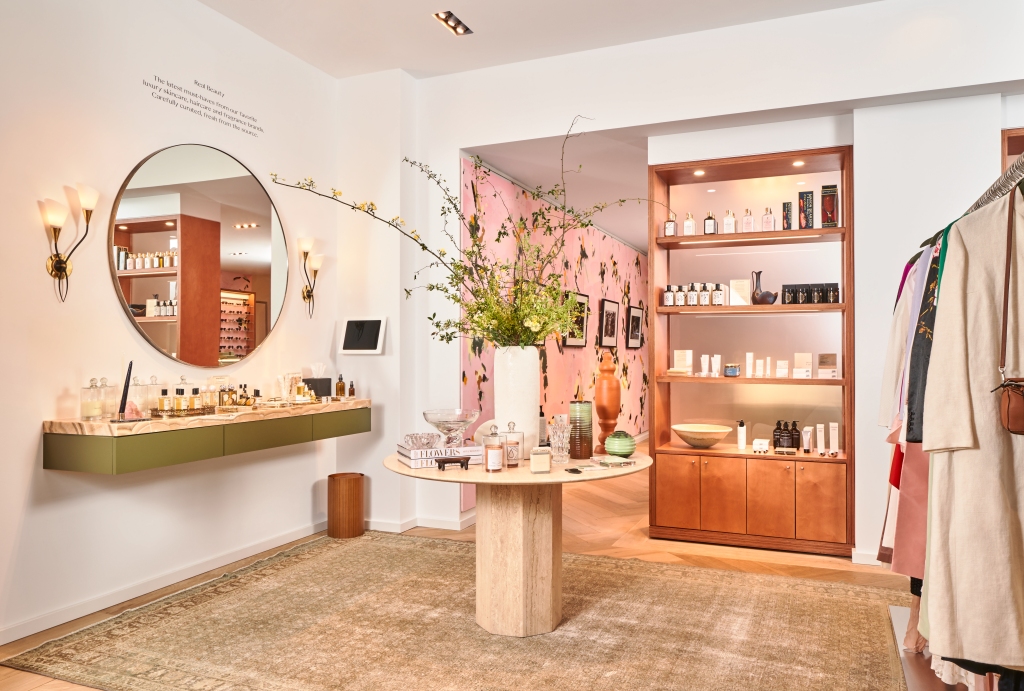 The beauty area of The RealReal’s San Francisco store. All quiet in times of COVID-19, as Bay Area begins shelter in place for next three weeks.  Joyce Lee

And perhaps merchandise can come from other sources if consigners don’t bite.

Ventry cited Gilt Groupe’s success during the Great Recession as a similar study directly benefitting from a retail slowdown — “in terms of gaining access to covetable inventory at a discount to wholesale both directly from the brands, as well as from the retailers.”

Citing the overarching near-term trend in “reduced demand for discretionary items and luxury goods,” Marie Driscoll of Coresight Research expressed a more somber thought, “The RealReal is likely to see reduced growth reflecting new consumer behavior and the outlook for a weak economy in 2020.”

Although resale poses “high-touch” services such as authentication and selling consultations — with hands running over surfaces like handbags for inspection — resellers are reducing interactions, increasing social distancing and in all cases: upping sanitization.

If their stores are still open.

As of now, luxury handbag player Fashionphile remains open, while Rebag announced on Tuesday it’s temporarily closing all of its stores. Like many others, Fashionphile and StockX issued statements last Friday to customers detailing increased sanitization efforts in line with the CDC protocol, with order delays expected in regards to the latter.

As of Tuesday, StockX and competitors such as Flight Club, Stadium Goods, and Goat closed stores in New York City, as well as Los Angeles, Chicago and Miami in some instances.

Fashionphile founder Sarah Davis told WWD: “We haven’t seen a major decline in the number of people who are coming to us to sell. That being said, our plan is to continue to operate as usual with a more thoughtful approach aimed at increasing actual distancing as much as possible.” At presstime, Neiman Marcus selling rooms and Fashionphile showrooms remained open, with Neiman Marcus stores advising of enhanced cleaning measures as well.

In regards to sanitization measures, what are consumers more concerned about? Is it germ-laden clothing, regardless, of whether it’s “new” or “used” — or is the culprit rather a disproportionate stigma that is cropping up again in regards to wearing other people’s clothes?

Research published last week funded by the National Institute of Allergy and Infectious Diseases and National Institutes of Health found the COVID-19 virus can last up to 24 hours on cardboard and a few days on plastic and stainless steel, although it did not prove people had been infected this way.

While the survivability of the virus on soft surfaces — like clothing — remains lesser-known, researchers at Harvard Health found no evidence of it. Regardless, the CDC and the World Health Organization advise clothing to be changed at the door when entering one’s home, and in the event of caring for an ill person, to wear gloves when handling dirty clothes.

Although Urbn-owned Urban Outfitters closed stores worldwide, its rental service Nuuly presses on — using the recommended precautions like gloved hands for receiving and packing, as well as its usual dry and wet cleaning methods and 250-degree steam tunnel.

Rent the Runway also detailed its cleaning policies in boldface earlier this month. As of Monday, all of its stores are closed due to COVID-19, with drop-off locations next to go (West Elm being the latest).

But Leslie Harwell, managing partner at Alante Capital, isn’t concerned about the cleaning efficacy as a dent to business, so much, but the product mix for homebound customers, which would leave them all dressed up, but with nowhere to be.

On Tuesday, a customer e-mail went out from Rent the Runway with the goal of capitalizing on the WFH or “work from home” trend in an edit of knit tie-dye sweatpants and sweatshirts, fluid rompers and band Ts for comfort, alongside blazers and dresses for the inevitable video conference calls. 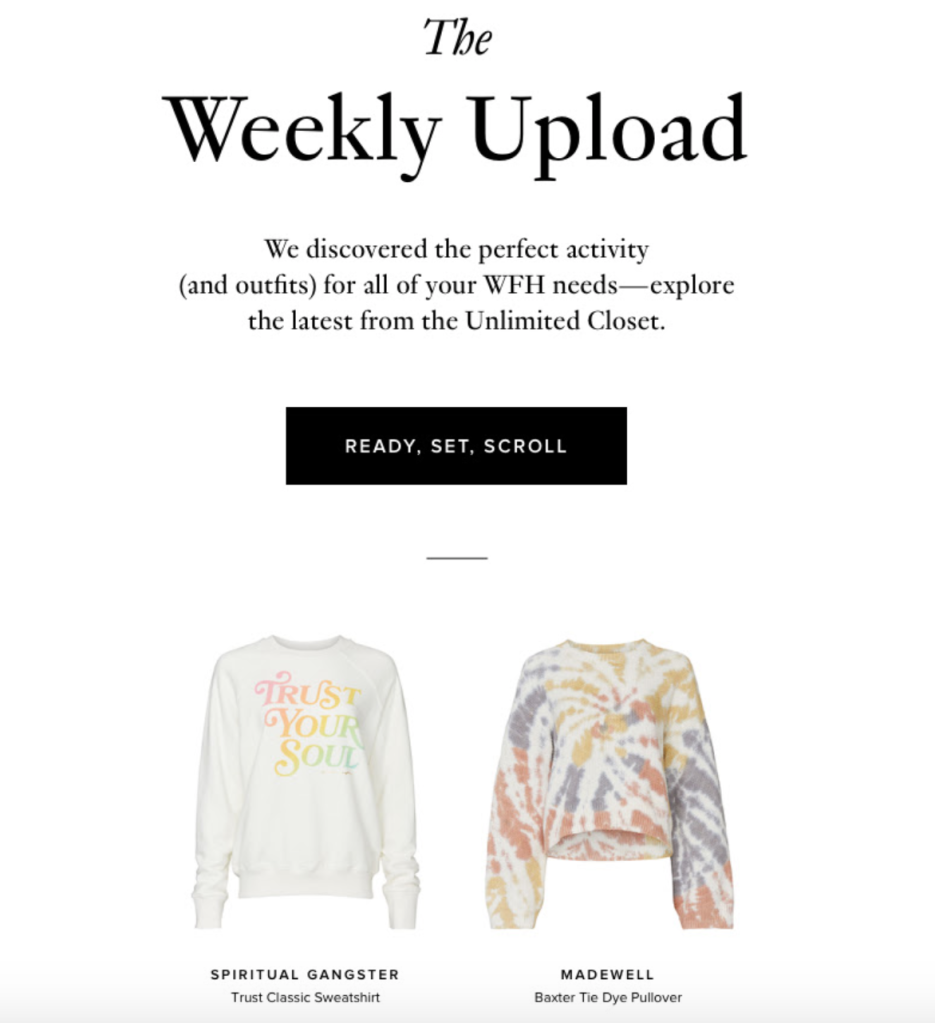 “For clothing rental — knowing that things get cleaned between wears should be reassuring. However, the product mix that tends to be on rental platforms isn’t quite a match for what people need right now. With people not going out and events being canceled, I think it’s pretty evident that there will be a dip in volume there as people spend time getting back to basics over the near-term period of uncertainty. Once things return to normal, I think it’ll recover relatively rapidly,” said Harwell.

Driscoll and Ventry agreed with Harwell, that in the short-term, the rental marketplace will suffer a slowdown due “to government-imposed ‘sheltering in place,’ dine-in restaurant shutdowns, and large events closures which will lessen the need for rental product,” but with a speedy recovery.

Slipups are already being seen by Rent the Runway, including the company failing to include paper return labels with recent orders for several customers. It could represent another operations hiccup especially if customers lack printer access at home.

Harwell believes the extended time at home may cause a resurgence of Marie Kondo-related clutter clearing practices (a win for ThredUp clean-out kits) with consumers possibly turning to peer-to-peer resale platforms for community if germ-related fears are abated and isolation proves debilitating.

Back in December, John Lagerling, the U.S. chief executive officer of Mercari, a Japanese resale marketplace, described the months following the traditional retail holiday season, “as well as February and March,” as being a “big time for resellers.”

That’s no doubt been affected, so will resale see a shift in its peak season this year, with quarantine closet cleanouts becoming a boon later on?

“We’ll see a lot more supply on peer-to-peer platforms, but what effect that has on transaction volume remains to be seen,” said Harwell.

The Show Must Go On: Conferences Go Digital in Light of Coronavirus