Today’s unveiling of the West Concourse is the latest step in the renaissance of the emotionally resonant site. 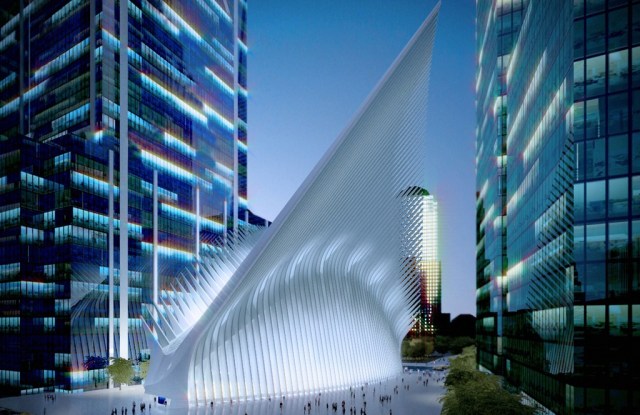 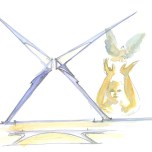 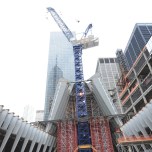 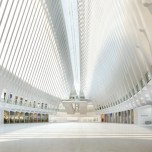 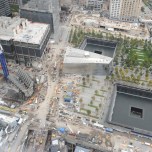 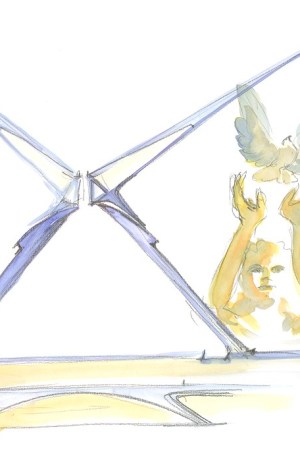 An illustration of Santiago Calatrava’s inspiration for the Oculus: a child setting a dove free. 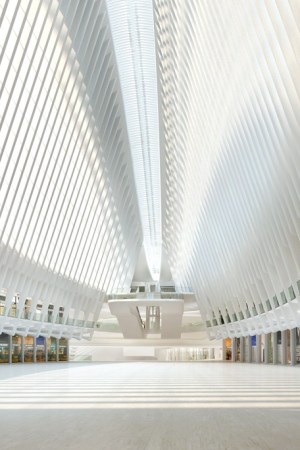 A rendering of the Oculus. 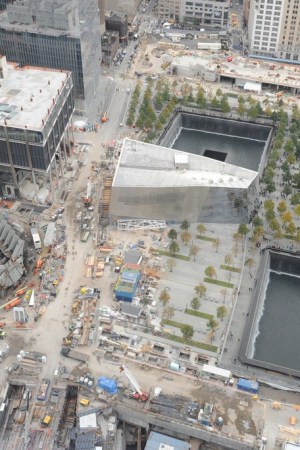 The reflecting pools of the National September 11 Memorial Museum.

This story first appeared in the October 24, 2013 issue of WWD. Subscribe Today.

Today’s unveiling of the West Concourse of the World Trade Center is the latest step in the renaissance of the emotionally resonant site, which is expected to become a major draw for office workers, tourists, residents and shoppers. Australian shopping mall developer Westfield, which is guiding the project’s 440,000 square feet of retail space, has an ambitious plan involving soaring ceiling heights, architectural prowess and a $1.2 billion price tag at full build out. Westfield paid the Port  Authoritu $612.5 million for its 50 percent stake. The entire campus of 16 acres has a $20 billion price tag.

The center is expected to do $700 million to $1 billion in annual retail sales and $2,000 to $3,000 in sales per square foot. “It will be one of the top retail facilities in the world,” said Greg Miles, chief operating officer of Westfield Group.

With floors and walls covered in white Italian marble, just as the other retail areas, the 40,000-square-foot West Concourse will feature retailers to service office workers’ daily needs from morning to lunch to evening, including quick food and drink options.

With a total of 350,000 square feet available now — 90,000 square feet will be delivered when tower two is built — Miles said the company has started seeing “intense demand for retail space. We’re in the process of finalizing deals. We’re coming up with a really diverse range of high-street brands and luxury brands.”

According to Miles, Westfield World Trade Center, as the retail component of the enormous office complex is called, will cater to 454,000 office workers plus 60,000 residents and an indeterminate number of tourists, who arrive by busload to visit the National September 11 Memorial & Museum at the World Trade Center. There will be nearly 5,600 hotel rooms available downtown, including the Ritz-Carlton, the new W Hotel and the future Four Seasons Hotel. Westfield believes the project is the largest commercial real estate development in the U.S.

“Our site is the center of a significant transportation hub,” Miles said. Thirteen subway lines and the PATH train meet within one block of Westfield World Trade Center, including the Fulton Street station. Westfield also expects to draw from secondary trade areas such as uptown Manhattan, Brooklyn and the New Jersey waterfront.

“We know what their spending power is,” Miles said of neighborhood denizens. “We have the office workers on weekdays and the overlay of the tourist population. That market does spend.”

“There’s over $5 billion in spending power in this market,” said Andrew Breslau of the Alliance for Downtown New York. “That’s using fairly conservative metrics. With the right mix of tenants, the World Trade Center will draw tourists and residents.”

Breslau said the transportation element will create heavy foot traffic. Unlike Grand Central Terminal, which “is largely defined by the transit experience, Westfield World Trade Center will be a destination. The options that will be available are thrilling for advocates of Lower Manhattan.”

The makeup of the office corps is changing. The larger, secular story is that financial services have been decentralized, dropping from 75 percent to 45 percent, with companies such as Condé Nast, HarperCollins and new technology firms moving in. “Our vacancy rate is healthily low,” said Breslau.

The opening of the West Concourse marks the first time the pedestrian link between the World Trade Center site; Brookfield Place, formerly the World Financial Center, and the New York Waterway Ferry Terminal will be restored to the public since Sept. 11. When the complementary concourse is unveiled at a still-to-be-determined time, it will be the first time pedestrians will be able to walk from the West Side to the East, with a corridor from Brookfield Place to Westfield World Trade Center to Fulton Center to the east side of Wall Street. “Never before,” said Breslau, adding that the old World Trade Center was impassable and cut Lower Manhattan in half.

Westfield World Trade Center has an unusual design by star architect Santiago Calatrava. Its centerpiece is the Oculus, which rises 150 feet at the highest point of the ceiling. It’s formed by a series of riblike structures. Ribs emanate from the roof, forming a shape with spikes that looks like a cross between a prehistoric animal and modern invention. It was inspired by the image of a dove being released from a child’s hands, Calatrava has said.

Some real estate brokers who’ve seen the space wondered if it will be conducive to selling because the ribs cover part of the store facades. There are also imposing two-story street-facing, street-level flagships with up to 8,000 square feet of space. “Some retailers are interested in street-level space and others are interested in the Oculus,” Miles said. “The Oculus is for fashion.”

Miles declined to name retailers Westfield is negotiating with, nor would he comment on rumors that brands such as Louis Vuitton, Prada, Giorgio Armani, H.Stern, Hugo Boss, Donna Karan International, Zadig & Voltaire, Ralph Lauren, Intermix and Comptoir de Cottoniers have expressed interest. Sources close to Westfield said the company put out hundreds of letters of intent and held more than 100 meetings with brands. Asking rents, depending on location, can be as high as $450 a square foot, with added costs such as a percentage of sales, according to sources.

With 150 retail spaces to fill, the Westfield site is expected to open in 2015. “We didn’t expect to [announce] tenants” by now, Miles said. “Typically, we only announce retailers when they’re ready to announce and when we can tell a story,” meaning that Westfield likes to reveal many tenants at once.

Westfield in 1999 partnered with developer Larry Silverstein in a joint retail and office bid for the World Trade Center. “We bought the [retail] in 2001 and settled it all a couple months before 9/11,” Miles said. “In order to make it more simple for the Port Authority, we sold the retail rights back to them in 2003. We retained first right of refusal in a joint partnership with the Port Authority. That’s why we’re here today.” Westfield returned to the project in 2008 with a letter of intent that came to fruition in 2010. The agreement Westfield is building from now was signed in May 2012.

A decade is a long time, even for malls, which can run into obstacles such as resident groups opposing the development. The World Trade Center has had the added complication of Sept. 11, working under city and state governments’ watchful eyes, respecting sacred ground and dealing with various advocacy groups. “Any project has a long gestation period,” Miles said. “Westfield was very respectful of the incident that took place on 9/11. We’ve been involved in the museum. We lost a staff member during 9/11, so the company was very invested.”

Asked whether building Westfield World Trade Center has been more difficult than other projects, Miles said, “No more than usual. We built Westfield Stratford in 2011, adjacent to the 2012 Olympics in London. It’s really just part of the process. We did a $1.5 billion project in downtown Sydney in 2010 and built Westfield London in 2008. This is the center of [Manhattan’s] business and financial district. The memorial is a large part of the site. We were a donor to the museum. We’d like to think we’ll be a partner to the museum in years to come.”

The retail spaces were designed in consideration of the memorial site. “The project was designed around the memorial pools,” Miles said. “There’s no commercial activity directed toward the pools. There are no shops facing the reflecting pools. However, there is a dining area on our third level.”

While downtown Manhattan is densely populated — especially on weekdays — the area has long been considered by retail experts to be understored. A project that’s ostensibly been competing with Westfield for tenants is Brookfield Place. Brookfield, which is said to be charging lower rents than Westfield, has attracted luxury tenants such as Michael Kors and contemporary brands like Calypso St. Barth. The World Trade Center is “trying to cater to the breadth and diversity” of the downtown population, said Miles, adding, “By all means we’re not intended to be high-end luxury but a collection of brands that appeal to affluent people. After the level of diversity that reflects the U.S. resident, there could be some British high-street stores [and specialty chains] and up-and-coming designers. It’s about contributing to a curated collection.”

Miles said there won’t be a department store at the development. He declined to break down the assortment by type. “It’s not as precise as a percentage of the mix,” he said. “We need a mix that will be relevant to local residents.”

For that reason, Westfield will nurture homegrown retailers. “We’re identifying them. They may have only a few stores in New York. We’re giving them the opportunity to get into a great location with great customers. It becomes more of a risky bet than a safe bet for us,” said Miles, who noted that Westfield finds potential retailers through its network of leasing agents that are tapped into the market.

Westfield is also looped in on an international level. “In Milan, London and Sydney, we’re working with contemporary designers,” Miles said. “We’re not lacking in opportunities to make it successful. We’re doing a major project in Milan and have a network of retailers we work with.”

In addition to retail, there’s 30,000 square feet of event space that will be used for pop-up shops, exhibitions, fashion shows and cultural events.

“I think our project will be a catalyst for investment [in downtown],” Miles said. “It will be good for everybody. Critical mass and diversity drive consumer interest. Downtown is very understored at the moment. The working population is very much starved of retail, and good retail.”

“Downtown has over 60,000 residents who are hungry for options,” Breslau said. “We’re delighted with what’s already here. Fairway is coming and there’s other activity. The pillars of downtown, retailers like Century 21, are also thrilled. The power of agglomeration is a significant thing. Not only will we have tourists, workers and residents, you’ll begin to get other people to think of Lower Manhattan as a shopping destination.”

Luxury brands such as Tiffany and Hermès have opened stores on Wall Street and, at the time, other high-end retailers expressed interest in launching stores downtown. “It’s difficult in that area to get a critical mass of street retailers,” Miles said. “They only serve the Wall Street banker today, and only on weekdays. It’s such an underserved market with a large amount of above-income [shoppers].”

“That whole little stretch on Wall Street with Thomas Pink, Tumi, BMW, Hermès and Tiffany became a little cluster that serves a very discreet population,” Breslau said. “It’s a nice little shopping strip, but it isn’t scale and what we’re getting now is scale.”

“Once it’s fully completed, it will be compelling,” said Miles. “When the fences come down, it will become one of those special urban areas in Manhattan. We don’t believe in a one-size-fits-all model.”