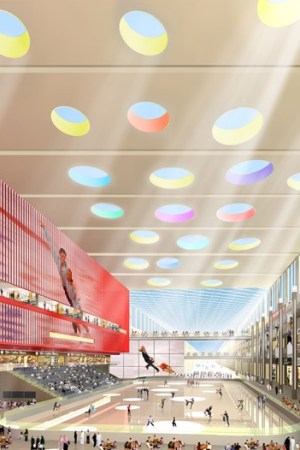 At 5.6 million square feet of retail space, the mall is considered the largest in the world. There are 1,200 stores plus 160 food and beverage outlets, and the mall is expected to attract 30 million visitors in its first year. And while Dubai, like the rest of the world’s economies, is experiencing a slowdown, the mall is poised to do business in this major shopping and leisure destination.

Yousif Al Ali, general manager, said Dubai Mall has more than 165 international stores that have not previously been represented in the Middle East.

“To deliver a fresh retail experience, it was important for us to bring in names that are new to the region,” he said. “We developed partnerships with many leading international retailers to open for the first time here.”

Included in the mix are Bloomingdale’s department store and Galeries Lafayette of France, both entering the region for the first time.

Bloomingdale’s will be managed and operated by Al Tayer Insignia, part of the United Arab Emirates-based Al Tayer Group.

“This will be our company’s first overseas location, and we expect to learn a great deal about how our brands translate internationally,” said Terry J. Lundgren, chairman, president and chief executive officer of Macy’s Inc., parent of Bloomingdale’s. “Dubai offers a unique opportunity for Bloomingdale’s. It’s a fast-growing, affluent marketplace that has emerged as an international destination for tourism, sporting events and business.”

Adding to the exclusivity of Fashion Avenue is a dedicated VIP valet entrance with onyx cladding, white marble flooring and an intricately designed glass ceiling. A special event facility is also part of the area.

“We will have the ability to host year-round entertainment and high-profile fashion events. Our Fashion Catwalk atrium with a [65-foot] runway will be a launching pad for unveiling collections, hosting product launches or VIP functions,” said Al Ali.

The launch of the mall has not been without its setbacks. Two highly publicized opening dates, one in August and another in October, had to be postponed just days before the launch. Delays are not new to Dubai, where developers often announce openings well before a project nears completion.

The Dubai Mall is the UAE’s most ambitious retail launch to date. Besides an array of shopping, the mall has a number of entertainment options. It hosts the Olympic-sized Dubai Ice Rink; an indoor waterfall that drops four levels; KidZania, a children’s “edu-tainment” center; a SEGA Republic theme park, and a 22-screen cineplex, the largest in the region.

One of the mall’s most complex attractions is the Dubai Aquarium & Discovery Centre. Set in the center of the mall, visitors can enter a 270-degree walk-through tunnel to view over 33,000 aquatic creatures, including 400 sharks, the largest single school of sharks on earth. The aquarium holds 2.6 million gallons of salt water. A team of aquatic experts from Australia is managing the project.

The Dubai Mall, which also has an adjoining five-star hotel, The Address, is part of the Downtown Burj Dubai development, created by Emaar Properties, with which Giorgio Armani has partnered for his hotels. The world’s tallest building, which is nearing completion, the Burj Dubai, stands next to the mall and the first Armani Hotel and Residences is expected to open at Burj Dubai in 2009. The Dubai Mall will have the only paid-public access viewing area to level 124 of the skyscraper.

Infrastructural support for the mall has been a major concern to the developer as well as residents. The mall, which has 14,000 covered parking spaces, will also have a dedicated exit off of Dubai’s main highway, Sheikh Zayed Road.

Still, area residents have said that traffic in the months leading up to the opening has been a nightmare, reporting major delays in the neighborhoods around the mall. As Alexandra Harty, a resident of the Old Town neighborhood, said, “I don’t know where the millions of visitors are going to go.”