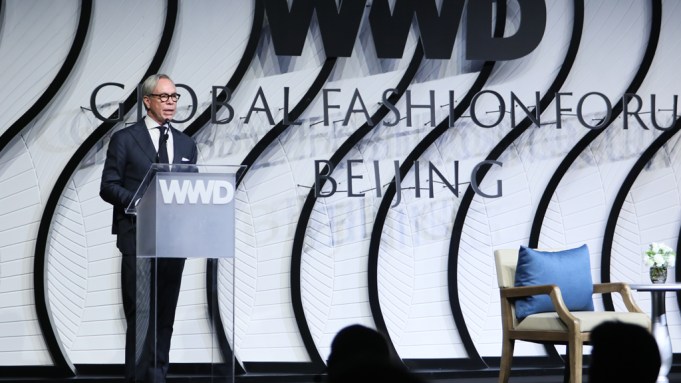 SKP has long been a favorite haunt of China’s most fashionable set, but on Friday it also played host to leading creative and business minds in fashion.

After a full day of talks at the WWD Global Fashion Forum, the crowd — from a host of brands including Hermès, Hugo Boss, Printemps and many more — gathered at SKP to sip prosecco and tour the mall. Ji Xiao An, chairman of Beijing Hualian Group, hosted the event.

While China’s blockbuster growth has dimmed somewhat, the view from most executives was that there is significant potential to tap if brands do their homework.

“We’re just really at the beginning for the China market,” Claire Chung, Yoox Net-a-porter Group China general manager, said. “There’s wealth creation in the younger generation, especially in China. You don’t see that in Europe. If brands truly invest now and really understand that consumer, that’s going to be their consumer for the next 20 years.”

Nicolas Houzé, chief executive officer of Galeries Lafayette, had flown in from Paris and said the French department store was planning to open another location in the country.

“We opened three years ago [in Beijing.] We have been increasing the business by double-digits every year. This year we will make 100 million euros ($110 million) gross, so it’s quite a good operation and now we are looking for a store in Shanghai,” Houzé said.

“American brands tend to be more America-focused,” Wu said. “Europeans, from very early on, knew that they depend on international business to survive. I could be wrong, but I don’t think that there is any European brand that could be dependent on one European country.”

Given that Chinese customers appear less interested in high-end luxury goods, American brands could be particularly poised to make headway in China.

“A retail space like [SKP] is showing the trend in China to be more open to have luxury brands, but also affordable luxury — the retail sector here is becoming more democratic,” said Gianfranco Ditadi, Ralph Lauren’s managing director for Greater China. “It’s not just about shopping but also having entertainment and making people comfortable to spend time in a place, and then they will also spend money.”