NEW YORK — Let’s face it, Ann Taylor has never been an emporium for the perennially hip. I haven’t shopped there with any sort of zeal since my college formals and, sadly, that was about a decade ago. Occasionally over the years... 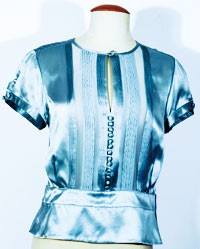 NEW YORK — Let’s face it, Ann Taylor has never been an emporium for the perennially hip. I haven’t shopped there with any sort of zeal since my college formals and, sadly, that was about a decade ago. Occasionally over the years I’ve wandered in with my mother to help her find things, but rarely anything for me.

However, after seeing the company’s new ad campaign for fall, shot by Annie Leibovitz and, to celebrate its 50th anniversary, featuring 50 models of all ages like Twiggy, Patti Hansen, Angela Lindvall and Frankie Rayder in clothes that were pretty and even hip, my interest was piqued. There was one piece in particular, a green vintage-looking printed shirtdress modeled by Karen Elson that looked very Fifties, but right on trend. But it didn’t stop there. The models also sported great tweed jackets, satin blouses and little black cocktail dresses that were, well, if not reminiscent of Holly Golightly, then at least some TV movie version of her.

So after New York Fashion Week — during which I’d spent several days not only staring at models flaunting spring looks but editors and buyers sporting their own takes on fall’s fashions (round-toe pumps, full skirts, sequined capelets) — I was ready for something as conventional as Ann Taylor.

The store on Madison Avenue at 59th Street was a treat. It was expansive — three floors and a mezzanine — and at lunchtime it wasn’t particularly busy. The mannequin and table displays featured the green-printed dress and an array of trousers and knit tops. After pouncing on the rack of dresses and rifling through them to find my size, I regained my composure. After that, though, instead of some sort of epiphany, it just felt like any Ann Taylor store. I could have been in Raleigh or Dallas, shopping with my mother or even for my mother.

However, looking around and sifting through the racks more carefully, some cute and stylish pieces emerged. In a rather manic fashion, I toured the first floor, gathering up a rose tweed jacket, a dove gray silk charmeuse blouse with silk covered buttons and delicate puffed sleeves, a pale lime chiffon trimmed satin shirt, a black bouclé pencil skirt, a cashmere V-neck and a long-sleeved knit top that tied at the neck. After piling up an impressive armload of goods, a saleswoman by the name of Conchita asked very graciously if she could start a dressing room for me. Her manner was so lovely she could have been offering afternoon tea as she led the way to a spotless and spacious fitting room.

The much-coveted green dress fit perfectly, but was also beautifully made with silk covered buttons, a side zipper to aid in slipping it on, a skinny yellow belt and even a half crinoline sewn onto the matching green slip. All for $199.

The cashmere V-neck was nice, but a touch boxy and itchy, so for $120 it was a no. The black tweed pencil skirt, while the right size, just wasn’t a flattering fit. Plus there was an additional seam that ran parallel to the waistline, but about two inches below it (almost a yoke but not quite) that made it all the worse. Other women I’ve spoken with also have had trouble with the fit of the skirts. One found them too tight in the hip and too loose in the waist, while another found the additional seam profoundly unflattering. The knit necktie top was cute, but not me. The dove gray blouse with a hidden side zip was darling ($99), while the pale lime chiffon and satin top, at $79, was pretty. It would have worked well as a shell under a jacket, but was a touch too blousy to be called flattering.

Conchita was very diligent about checking in to see if I needed other sizes and also to get my opinion on it all.

She took my things to the register as I trooped upstairs to check out the rest of the goods. All the mannequins or bust displays around the store were merchandised well with cardigans shown fastened snugly with sparkly brooches, blouses topped with strands of pearls and purses festooned with big Carrie Bradshaw flowers. On the mezzanine there were more tie blouses, but in silk, which I thought might work better. The second floor was a marvel, too. The shoes were cute (snobbery aside, I generally wear designer shoes, so for me to even consider a pair of Ann Taylor heels was surprising), especially a nude pair of sandals with a thin stacked wooden heel. The best part was that they were only $108 (turns out they were on sale for $86.40, even better).

The salespeople on two were equally magnanimous in their service and in relaying specifics on some of the eveningwear separates. There was a ruby colored satin skirt with chiffon inserts that was beautiful. There weren’t any of the black cocktail dresses in the ads, though there were a lot of handbags. Not only salmon pink-and-white tweed ones, which were too cute for me, but also roomy, colored leather totes, which were alluring if I’d been in the market for a bag.

Back downstairs, I tried on the ruby skirt and the tie blouses. The skirt looked terrible on; every bulge was, well, divulged. The blouses were sweet, but sweeter in editorial layouts and ads than on me.

Conchita rang up the shoes, dress and the dove gray blouse for a total of $417.55. I slipped on the heels and wore them the rest of the day. They remained comfortable throughout. I’ve worn the green dress twice since; my mother loved it and so did the überfashion-y girls at work.

It will be interesting to see if the company keeps up this handful of spot-on styles and becomes another place to shop for me — and my mother.