According to Yelp's latest data, physical retail at the local level is ticking upward.

Physical shopping at local stores is not dead, according Yelp data.

While waves of closures may seem to paint a dreary picture for physical retail, data from local hub Yelp shows an uptick in business at the front lines of local economies.

The company, whose app acts as a hyperlocal resource hub connecting area businesses to consumers, has been tracking data across 50 regional and major metropolitan areas since 2016. Using Yelp Economic Averages, or YEA, an economic indicator based on Yelp data, it discovered that brick-and-mortar fashion and beauty retail are on the rebound.

YEA for women’s clothing showed growth of 1.7 points, while sporting goods clocked in at even more impressive 4.1 point increase.

Sporting goods and women’s clothing have been on an upswing over the past two quarters.  Courtesy image

According to Bialik, the trend is evident and consistent across retail sectors, with department stores, shoes and women’s clothing all growing in the past two quarters.

Beauty did even better. “Cosmetics has a three-quarter streak of gains,” he said.

Naturally, one might think that holiday momentum would explain some of this growth. But, since Yelp seasonally adjusted the data, it seems to illustrate a more stable sign of growth. As for other retail sectors, many showed a 1 to 2 percent increase, while retail in general nabbed 3 percent for shopping overall over the last two quarters.

“Many of the categories that have rebounded in the last two quarters remain level with or behind where they were at this time last year,” Bialik explained, noting that women’s clothing dropped 0.7 points, jewelry shaved off 1.6 points and shoes came in under last year’s score by 2.6 points.

There were some notable exceptions. Department stores, for instance, actually added a half point to their third quarter 2018 score.

As for regional comparisons, Yelp found that certain parts of California, the country’s largest state and biggest economy — the fifth largest in the world, in fact — appear to be stuck in stagnation mode. San Jose, San Francisco and San Diego all ranked in the bottom five metros, and Los Angeles landed in the bottom 10, while Sacramento came in below average.

Across the spate of businesses that reside here, its retailers have been hardest hit, Yelp said. Stores ranked at the bottom in all five of the California metros, with shoe, cell phone and women’s clothing retailers plunging the most. 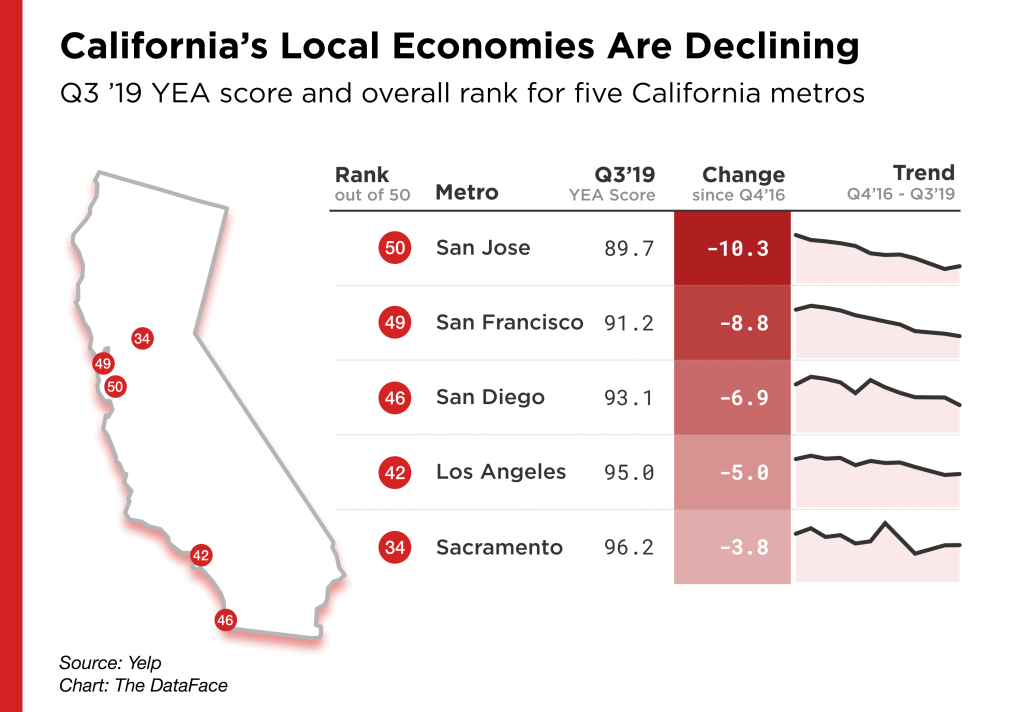 But Bialik offers a ray of hope for the area’s retailers: While California retail may have underperformed across those five regions since the fourth quarter of 2016 — i.e., as far back as the Yelp Economic Average is available — it did show some signs of life last quarter. “Shopping overall advanced in Los Angeles and Sacramento, while department stores gained in every California metro tracked except for San Jose, including a 3.4-point gain in San Francisco,” he said.

The momentum seems to be converging further east. According to Yelp’s numbers, Buffalo, N.Y., and Pittsburgh, Pa., have become some of the fastest-growing “boomtowns” in the third quarter, joining Milwaukee, Honolulu, and Portland, Maine.

Denver, Providence, R.I., and Miami were strongest for third-quarter gains in department stores, with Providence being the strongest in women’s clothing.