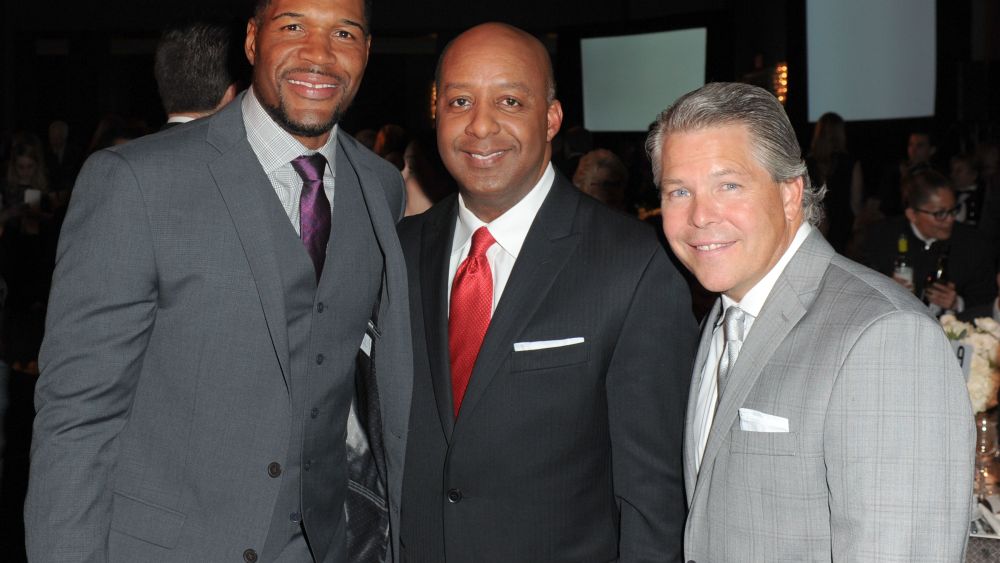 “This year, we’re going to make money. We’re going to be profitable at J.C. Penney,” predicted John Tighe, executive vice president and chief merchant at Penney’s which has been in turnaround mode since 2013.

Business talk wasn’t expected at the YMA Fashion Scholarship Fund’s 80th Annual Geoffrey Beene National Scholarship Awards Dinner on Thursday night at the Grand Hyatt. Yet for Tighe, the son of a bricklayer, it helped convey his “can-do” spirit and message of encouragement to the students and everyone else at the event where he was honored as “Retailer of the Year.”

“I recruited John to JCP 15 years ago,” said Liz Sweney, Penney’s former chief merchant who presented the award to Tighe. “His leadership skills and business acumen quickly propelled him. He’s also got a killer sense of humor and a keen interest in serving others, particularly kids. In 2012, JCP was struggling and didn’t have any money to support many charities. But John made an impassioned plea to support the 2013 YMA scholarship fund.”

“I paid for that table out of my travel budget,” said Tighe. “Bringing in young people to our industry and helping them grow and learn is super important.”

Also honored was Judy Person, executive vice president and group president at Randa Accessories, who received the “Wholesaler of the Year” award. The “Future of Fashion Award” went to Michael Strahan, of football, TV, and most recently, fashion fame, with last year’s introduction of the MSX by Michael Strahan men’s collection at Penney’s. Football and fashion, Strahan said, are a lot alike. “You wear tight pants and you run around a lot.”

The former New York Giant, who was once prone to wearing pants as colorful as a pack of Skittles, being honored by the fashion industry left him incredulous. “I’m taken aback by all of this,” he said. Sustaining the “can-do” spirit of the evening, Strahan told the students “You have to dive into” whatever path in life is taken.

The crowd of 1,500 at the Grand Hyatt on 42nd Street cheered the eight finalists, who were awarded grants for either $10,000 or $30,000, including the top finalist Vivian Cooper of Philadelphia University, who received a $35,000 scholarship. In addition, $5,000 scholarships were awarded to 229 students, three of whom also received second “special/surprise” $5,000 scholarships. All told, the evening raised $3.5 million for the YMA, which in addition to scholarships provides educational, mentoring and internship programs and is building an endowment.

“We’ve been fortunate to have a consistent set of donors, an amazing staff and a very engaged board,” said Peter Sachse, president of the YMA Fashion Scholarship Fund and Macy’s outgoing chief growth officer.

Paul Rosengard, chairman of the YMA Scholarship Fund, spoke of YMA’s mission “to identify and attract the best and the brightest students across all academic disciplines into our industry, whether they want to become designers, sales people, supply chain workers, financial executives or get into technology.”