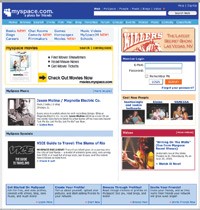 MySpace is among the first of a growing number of free networking cyber sites supported by advertising revenue, such as youtube.com and yub.com, which are increasingly being used as marketing tools to entice a generation that has made the Internet a key part of their lives.

Designers and retailers have good reason to pay attention. MySpace has more than 100 million registered members around the world. “A third of teenagers have learned about new products and brands on community-based Web sites,” said Michael Wood, vice president of Teenage Research Unlimited, which specializes in the teen market.

Nielsen Net Ratings reported that MySpace had more than 46 million unique visitors in July and was the fasting-growing Web brand, followed by Google and eBay.

Much like eBay, the most popular shopping site among teens, Wood said social networks like MySpace have become fertile ground for teenagers scouting for trends and fashions. The TRU study said young people ages 12 to 19 spent an average of 7.1 hours a week online in 2005 and one in two teens shopped online — with apparel topping the list of purchases.

Among the young designers who have plugged into MySpace is Malcolm Harris, founder and designer of the Mal Sirrah Collection, who keeps a blog of press clips and photos on his page. Harris attributed more than $625,000 in sales to the Web site, based on the 15 accounts he has opened since his profile was created in January.

The 35-year-old New Yorker said revenue, exposure and networking through the site have made it possible for him to open his first boutique in a luxury hotel in Abu Dhabi in the United Arab Emirates next year.

Harris said he is surprised the networking tool hasn’t caught on faster in the fashion community. “Sometimes the fashion world is not as forward as people would like to believe,” he said.

MySpace, which was voted the most popular Web site in a TRU study of 2,000 teenagers released in May, “is like the middleman, the agent to tell people where to go on the Internet,” said Hollie Velten, 25, the founder and designer of contemporary clothing and jewelry line Hollie Ten.

Velten, who created her MySpace profile in 2005, uses her page as a portal to her online store. Visitors can also find a list of retail locations that sell her merchandise or contact her directly for orders.

Though MySpace has yet to break out fashion as a separate clickable category — as it has done for music — the company is looking at opportunities within the fashion arena, including trade shows such as MAGIC and Pool.

MySpace made its initial appearance at Pool in 2001, returning in July to Pool in New York, and had a presence at the Las Vegas show this month. Exhibitor coordinator Ryan Walker, who created the show’s MySpace page in 2004, said 60 percent of Pool designers now have a MySpace page for their businesses. MySpace approached Pool again in February to set up a computer lounge, he said.

“We knew they were doing music, and we wanted to see them do something for fashion,” Walker said.

Until the company formalizes efforts to create a permanent central fashion forum, designers with MySpace pages also have the option of joining one of the Web site’s networking groups, created by designers to increase exposure and provide a chat room.

Two of the most popular networking groups are All MySpace Clothing Co., with 11,000 members, and Fashion Designers, a collective that has more than 24,000 members. In July, Fashion Designers held its first annual Fashion Designer Forum Awards, an online event that honored designers within the MySpace group, based on two categories: “Concepts/Sketches” and “Real Clothing.”

Some designers, including 25-year-old Carrie Cochran-Cabrera, founder and designer of contemporary jewelry line Karma Kultura, fear the user-friendly design of MySpace has made labeling oneself a designer too easy.

“Ebay became so cluttered with all kinds of DIY designers and with people selling millions of products that made it difficult to stand out,” said Cochran-Cabrera, who is also a costume designer and opened her MySpace account almost four years ago.

Some designers and retailers have had to deal with sites created without their permission.

Fraser Ross, owner of Los Angeles specialty store Kitson, succeeded in his efforts to remove a Kitson profile on MySpace that a fan created without permission. With Kitson’s official Web site accumulating more than 5 million hits per month, Ross sees no need to launch a company-operated MySpace presence. However, he said MySpace is “definitely a way for people to market product they can’t afford to [traditionally] market.”

For lesser-known boutiques, the decision of creating a MySpace profile is more difficult. Kime Buzzelli, the 36-year-old owner of the boutique Show Pony in Los Angeles’ Echo Park neighborhood, said, “There is a chance that someone out there will want to take your stuff and rip it off. But in the same sense, if you don’t have a MySpace page, you miss out on the many people who may want to see your stuff. It could be bad, but there’s more good to it.”