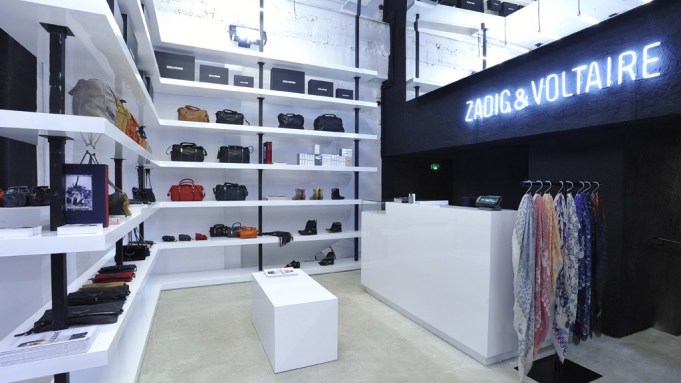 PARIS — French contemporary brand Zadig & Voltaire is stepping up its expansion this spring, notably in the U.S., where it will open five new doors by the end of June.

These include a 1,500-square-foot store at 465 Rodeo Drive in Beverly Hills — the last free spot on the street, according to brand founder Thierry Gillier — in late April.

Now is a good time for expansion in the U.S., Gillier said, because the market has moved through the recession and is ripe for new brands, especially in contemporary, and retail is booming.
“We are really just coming into the market now,” he said.

Some of the brand’s recent collaborations have been instrumental in building its renown Stateside, according to Gillier, a contemporary art aficionado. “We worked with Pamela Love and Erin Wasson, and they are both very well-known in the U.S.,” said Gillier. “We also did the Guggenheim with Christopher Wool,” he said, referencing the brand’s sponsorship of the artist’s recent New York exhibition.

At the end of March, a store will open at Malibu Country Mart, an outdoor mall in Malibu, Calif. Plans also include a three-floor, 3,500-square-foot boutique — the brand’s largest — on Chicago’s Oak Street, due to open in April; a door on Miami’s Lincoln Road in March, and a store in Washington, D.C.’s Convention Center in June.

Further down the line, a new store in Miami’s Design District and another in New York are also in the cards.
Architect Isabelle Stanislas designs all of Zadig & Voltaire’s retail outposts.

Its most recent development, a pop-up store on the ground floor of its Paris headquarters, opens Wednesday for six months. “This will help us work on a new concept for America,” Gillier said, nevertheless specifying that no two stores are exactly alike. “We are always looking for new energy, a new path.”

The 3,000-square-foot pop-up store is made from several knocked-through storefronts on the corner of the Rue Saint-Roch, giving it an eclectic, unfinished esthetic. Inside, the theme is carried through with concrete floors and walls, rough stone walls and brick pillars.

The neon-lit double-height entrance, housing the brand’s accessories, leads through to a series of connecting rooms showcasing women’s and men’s ready-to-wear, with mirrored ceilings and soft gray carpeting.