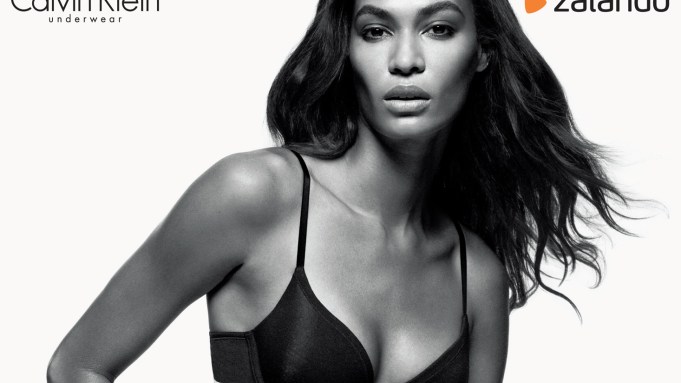 BERLIN — Zalando is tapping into Calvin Klein Underwear’s sexy image as the next leg in its drive for growth in fashion.

Going live on TV in mid-November, Smalls will directly address the consumer on the subject of sexiness in a series of ads tailored specifically to Zalando’s 15 European markets. It also highlights an as-yet-underdeveloped classification for Zalando — namely underwear — just in time for Christmas.

In typically cheeky Zalando fashion, Smalls will be touching on everything from Swiss watches to French baguettes and windmills in texts like “Hello Netherlands. Go ahead, ride your bike over here…and tell us what gets your windmills turning.” Though vice president of brand marketing Carsten Hendrich considers France to be Zalando’s most sophisticated market, it was there that Smalls’ original TV script came under the censor’s red pen. Gone is the mention of wine (promoting wine consumption on TV is not allowed in France), and the authorities also scratched the word “big” before baguette. Viewers on Facebook and Instagram will find a subtitle saying the text has been modified.

This is not a women’s-only campaign, though Smalls has the TV spotlight all to herself. Her male counterpart Tobias Sorensen will be seen online in a video, in all the behind-the-scenes materials, and in print, depending on the media and the country. “It’s an integrated campaign, with a digital core,” Hendrich said.

As in the Share Your Style campaign — in which international cast includes Christina Hendricks of “Mad Men,” Caroline de Maigret, Binx, Lucky Blue Smith and Noah Becker — Share Your Sexy will be communicating its message via print, outdoor ads, social media, and a digital hub where people in each country will be asked to say what’s sexy for them. Mood boards will be created from the answers, Hendrich said, allowing everyone to see the differences in the concept of sexiness per country. The hub also offers a little testing tool to find out “how sexy are you?,” the results of which can be posted and shared with friends. “These are just two examples of how to drive engagement,” Hendrich remarked.

If Share Your Style is any indication, Share Your Sexy could generate heavy consumer response. While both Hendrich and Zalando cofounder and board member David Schneider stressed it was too early to fully tally the impact of #shareyourstyle, which began in late August, first indications suggest there have been more than 100 million impressions, 40 percent of which are organic through user-generated content (via Instagram), Hendrich explained. The #shareyourstyle instant feedback tool, where sleepyheads unsure what to wear that morning can tap the Share Your Style community for an opinion, has  produced more than one million yes or no “should I wear it?” votes.

More than broadcasting sexiness in a more playful and engaging manner, Share Your Sexy and the company’s recent campaigns have all aimed to underscore Zalando’s growing role as a fashion player. “Our marketing is representative of what we are doing,” Schneider stated. Europe’s largest online platform for apparel and shoes is “moving away from just being a retailer buying and selling fashion, to emerge as a platform for brands. Working closely with brand partners, we are creating unique content to make the customer experience more unique and exciting.”

“We’ve been good at getting traffic in, but now it’s more of a dialogue and engagement between us and the customer, the brands and customers, stylists and customers, customers and stylists,” Schneider continued. “We’re out to create a network and platform to connect the right people with the right brands.”

This is not only driven by marketing, but Zalando’s advanced IT systems, which are in a constant state of evolution. “With our IT tools, we’ve given brands the opportunity to create their own store, upload own content and decide what goes live when. But there are also new possibilities to create stock directly,” he suggested, “where a brand like Mango, for example, which has a Zalando shop, could ship directly to the [Zalando] customer and thus not be limited by what we decide to buy. Better availability would be of great benefit for customers, and brands can use our marketing.”

The higher fulfillment costs were mostly related to improving the customer experience, as well as significant technology investments to further drive Zalando’s mobile and platform strategies. Stepped up investments in app downloads plus an earlier fall season start campaign pushed up the marketing cost ratio year-on-year.

“For us, it was clear. We saw great growth opportunities and invested in them,” Schneider said.  Zalando’s commitment to growth, as well as the e-tailer’s potential for future growth, remain unabated, the executive stressed.

“For us the focus is developments on the technical side, plus new products and new features. We just opened tech hubs in Dublin and Helsinki, not because of tax advantages but tech advantages,” he told WWD. “We need engineering talent, and Dublin has great universities and tech companies, and so great people. The same holds for Helsinki.”

With 2015 sales expected to increase by 33 percent to 35 percent over last year’s turnover of 2.21 billion euros, or $2.94 billion, Zalando is booking strong growth. “But in relation to the overall market, it’s a tiny fraction. There’s still plenty to do and so many opportunities, even in our existing markets. And with classifications like underwear, which is almost untapped [at Zalando] and why we’re doing Share Your Sexy — all this increases our relevancy and shows the consumer they can find their entire wardrobe at Zalando,” Schneider said.

Zalando offers more than 150,000 styles and 1,500 brands in 15 European markets. “But the future is not just about saying we have many things, but including niche pieces and new brands who are able to come up with interesting styles you can’t find elsewhere,” he said.

The e-tailer has been a game changer in Germany ever since going online in 2008, and the Berlin-based giant has always taken an open and inquisitive view as to what might come next. One thing is clear to Schneider as he considers the future: The whole landscape is and will continue to change dramatically.

“The whole mobile development is tremendous, and almost everybody underestimated what was to come,” he said. “Today customers do almost everything on their smartphones, and that’s changed how they perceive content. People stay in their apps. They have their personal feeds, their networks.

“It’s almost like new real estate,” Schneider continued. “You want to have those little icons on the smartphone. That is actually a whole new game. Moreover, the transition from content to commerce and the interactions in-between are evolving very quickly. It is all merging together.”