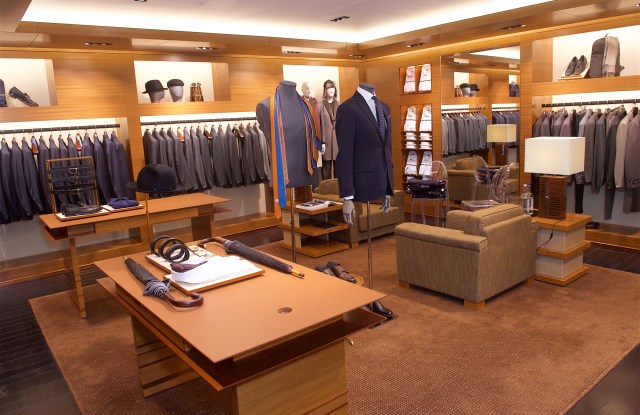 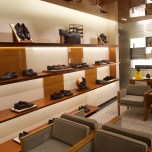 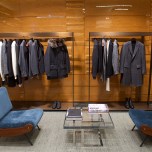 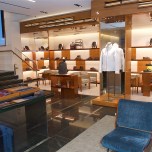 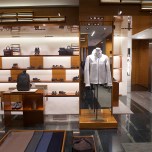 LONDON — Just like the large collage tapestry by William Kentridge that hangs on an upstairs wall, Ermenegildo Zegna’s newly refurbished store on New Bond Street here is a mix of texture, quirk — and individuality.

The store spans 6,512 square feet, dwarfing the original one that opened in 1987 on the same site. Known as a global concept store, it is the only unit to carry the brand’s new Bespoke Shoe Collection, Alessandro Sartori’s first project as artistic director for the brand.

The shoes are made by Gaziano and Girling, the decade-old British shoemakers that have a shop on nearby Savile Row. The Zegna shoes, which take more than six months to make, cost about 5,000 pounds, or $6,210, a pair and come in nine styles, including a double monk, a dress oxford and a jodhpur boot.

The new space consists of two separate buildings that have been knocked together over four floors, with interiors designed by architect Peter Marino. The textured chalk walls recall pinstripes or corduroy ridges. The warm, masculine space has touches of Italian marble, leather for handrails and table surfaces and a big bale of wool that doubles as a shoe display. A Fifties wood bar with marquetry details and teal leather stools has been installed upstairs, as has the tapestry.

Superimposed on them are black silhouettes of Zegna — one with a sewing machine instead of a head — while the overall work is decorated with yarns from Zegna’s Mohair Trophy threads.

During a walk-through of the store, Anna Zegna said she loves how her grandfather has been depicted. “The weaver has been woven,” said Zegna, president of the Zegna Foundation and a company principal.

No ordinary refurbishment, the unit at 37-38 New Bond Street was two years in the making and has been rebuilt with an eye to the environment, in keeping with the brand’s ethos. There are solar panels on the roof and LED lighting that doesn’t give off any heat. All of the wood — mahogany, oak, rose and ash — has been certified by the Forest Stewardship Council.

The building’s facade has been done in red and gray marble and red brick, a nod to the original 19th-century design. Metal strands have been used in the two front windows representing the warp and weft of fabric, while architectural sheep heads adorn the windows.

The Zegnas have long run a green-focused business, undertaking environmental projects with organizations including WWF China, Italy’s FAI, Oceana and ICRAM, the Italian maritime research center. The company also has its own nature park, L’Oasi Zegna, in Piedmont near the original mill.

The new unit carries the brand’s full range, including sportswear and accessories, formalwear, couture and made-to-measure. The bespoke shoes have their own separate area downstairs.

“It’s the best leather in the world,” said Sartori, showing off the models’ Goodyear welts and describing the various fittings and leather mock-ups that go into creating the finished product.

He said bespoke shoes were missing from the Zegna offer and there was no better moment to launch them than during the London store opening. Due to the fact that all of the fittings take place in London, the service is only being offered at the New Bond Street store.

Sartori, formerly of the French shoe and men’s brand Berluti and Z Zegna, also said that while his native Italy may be famous for “prêt-à-porter shoes,” it’s the Brits who are the specialists in handmade styles.

He created nine models based on different types of men: There’s Alexander, the bartender, whose style is a casual shoe with a sprinkle of brogue; David, an art dealer who favors a loafer with long laces instead of tassels, and Adam, a guitarist who likes a derby model. Customers can choose from materials including leather, suede, ostrich and crocodile.

Gildo Zegna, the company’s chief executive officer, who was sporting a slip-on pair of Gaziano and Girling shoes and a dark pinstripe suit on opening day, said he wanted to respect “Britain’s tradition of local craftsmanship and culture” with the introduction of the bespoke collection.

He said the bespoke shoe offer is also part of a new, wider strategy that puts an absolute focus on personalization and service, a “global vision, local focus” approach.

As tourist patterns become ever more unpredictable and as currencies fluctuate, Zegna — like other luxury brands such as Burberry — is keen to cultivate the local customer. The ceo said he plans to do that through personalizing the offer as much as possible and ensuring the service works, “even if that means going to people’s homes, anything to make their lives easier.”

He’s also opening up the offer with lounge and travel wear, which he said can be unisex, with women fitting into the smaller sizes. The brand is also returning to Pitti Uomo in January.

Although he declined to say how much money was spent on the London refurbishment, Zegna said it was one of the company’s “bigger investments” and that he would be doing something similar in another dynamic market, Dubai. The brand will relaunch its store at the Dubai Mall in mid-2017.

Zegna said he considers this year to be a transitional one in terms of business as he cleaned house and began enacting his new strategy. He’s also dealing with all of the macro changes that will no doubt impact the business.

Asked about Donald Trump’s election as U.S. president, Zegna said he’s hoping for the best but it’s still too early to comment. He said he stands by Italian prime minister Matteo Renzi ahead of the December referendum on constitutional reform, which is aimed at downgrading the power of the Senate. Renzi has said he will resign if he loses.

“He is the right person to lead the country for the future — with or without the referendum,” said Zegna. “He’s made a bold decision by calling the referendum and I fully support what he’s doing.”

Asked about business in China, Zegna said Hong Kong remains challenging while there are signs of improvement in mainland China and he’s expecting a positive 2017 in the region. “Everyone had to adjust to the new normal there. It’s been two years of rough market conditions, but we’ve already seen a small improvement since the summer,” he said.

He said his key to a successful business is a “back to basics” approach, and remaining close to the customer. “It’s hard work, but you have to be there for them, tell them about what’s new, where you’re going, and offer them the right value. And you have to offer collections that perform, that are comfortable, fun to wear and long-lasting. It’s a more emotional approach to business.”